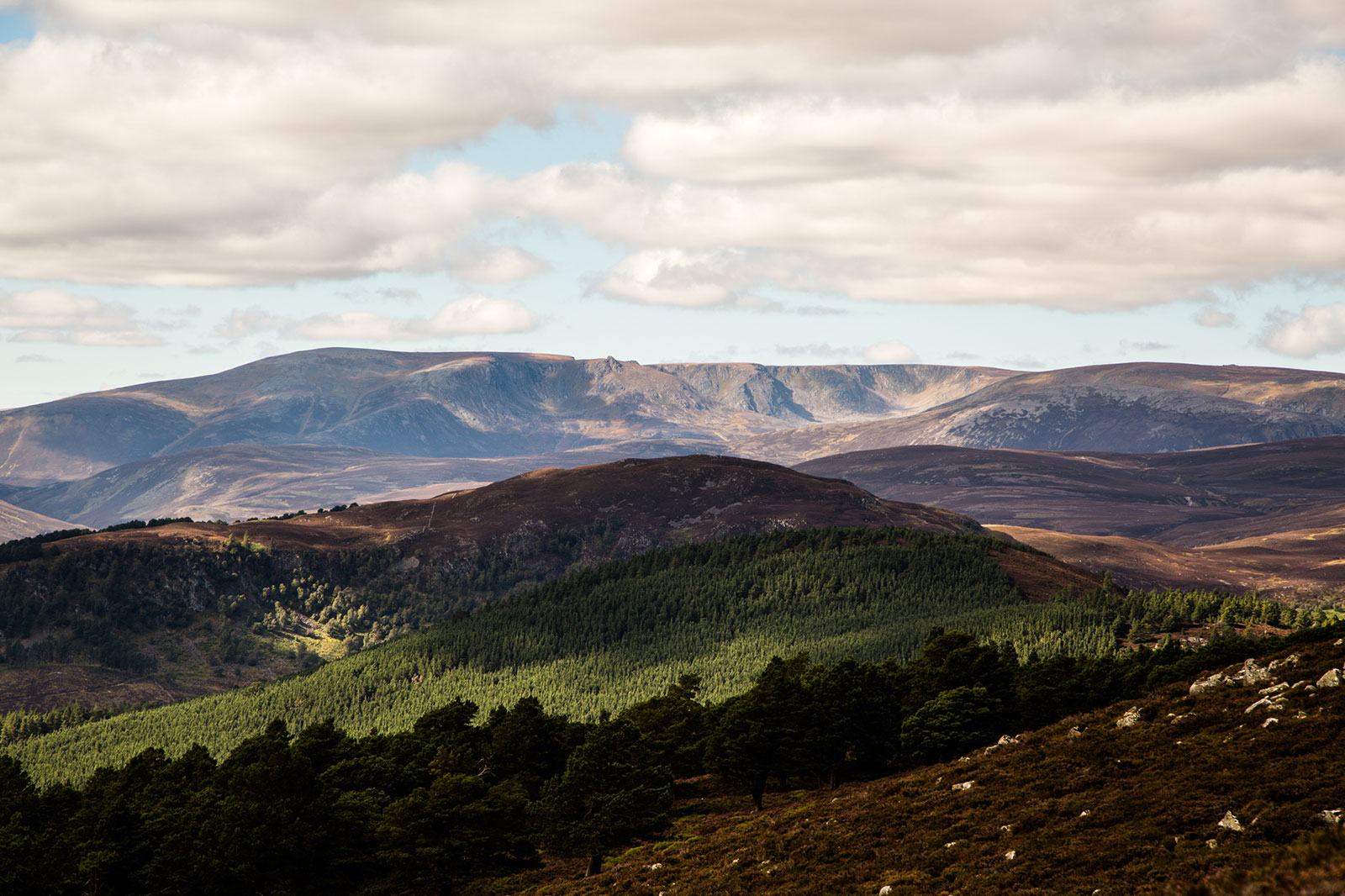 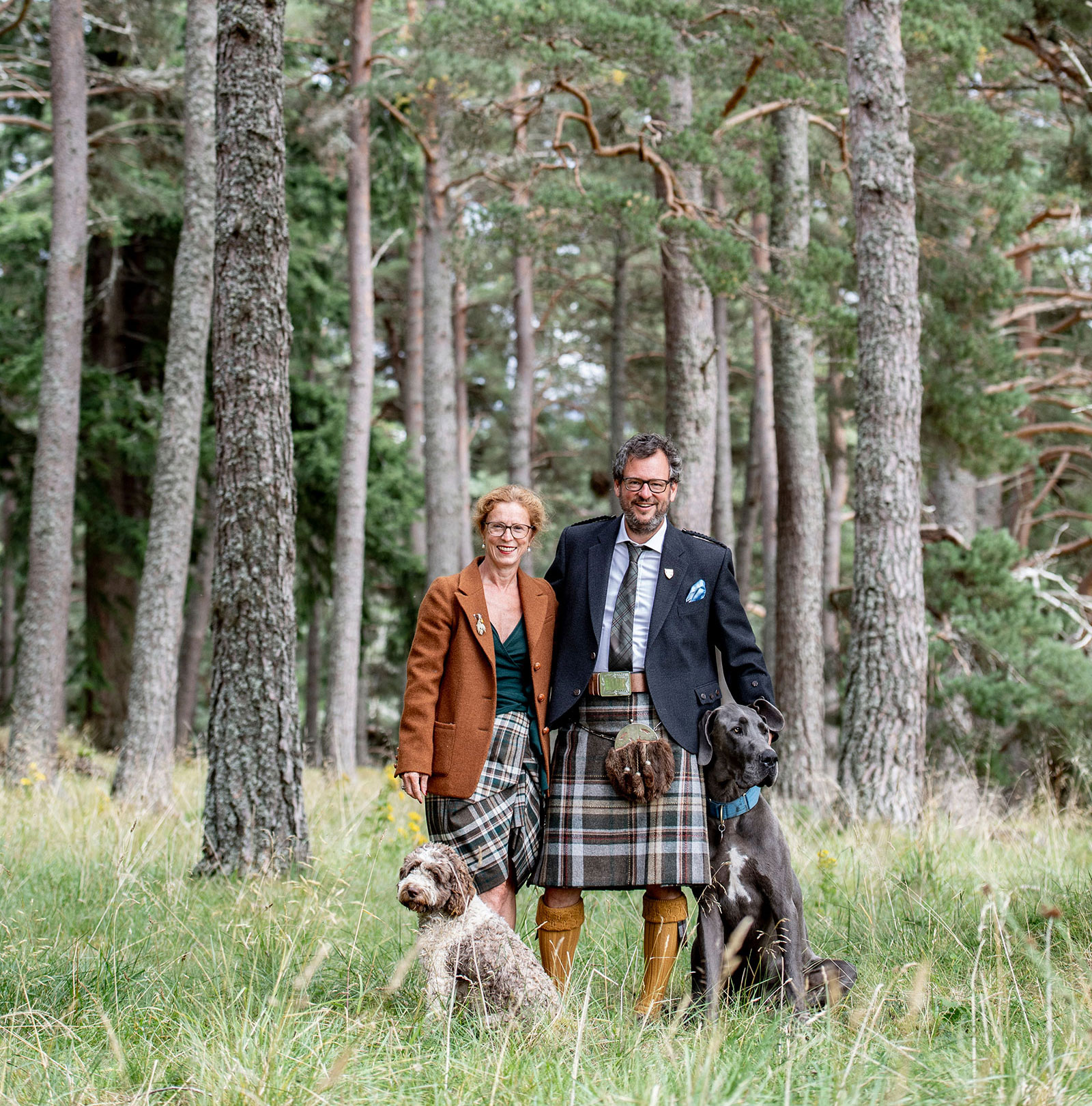 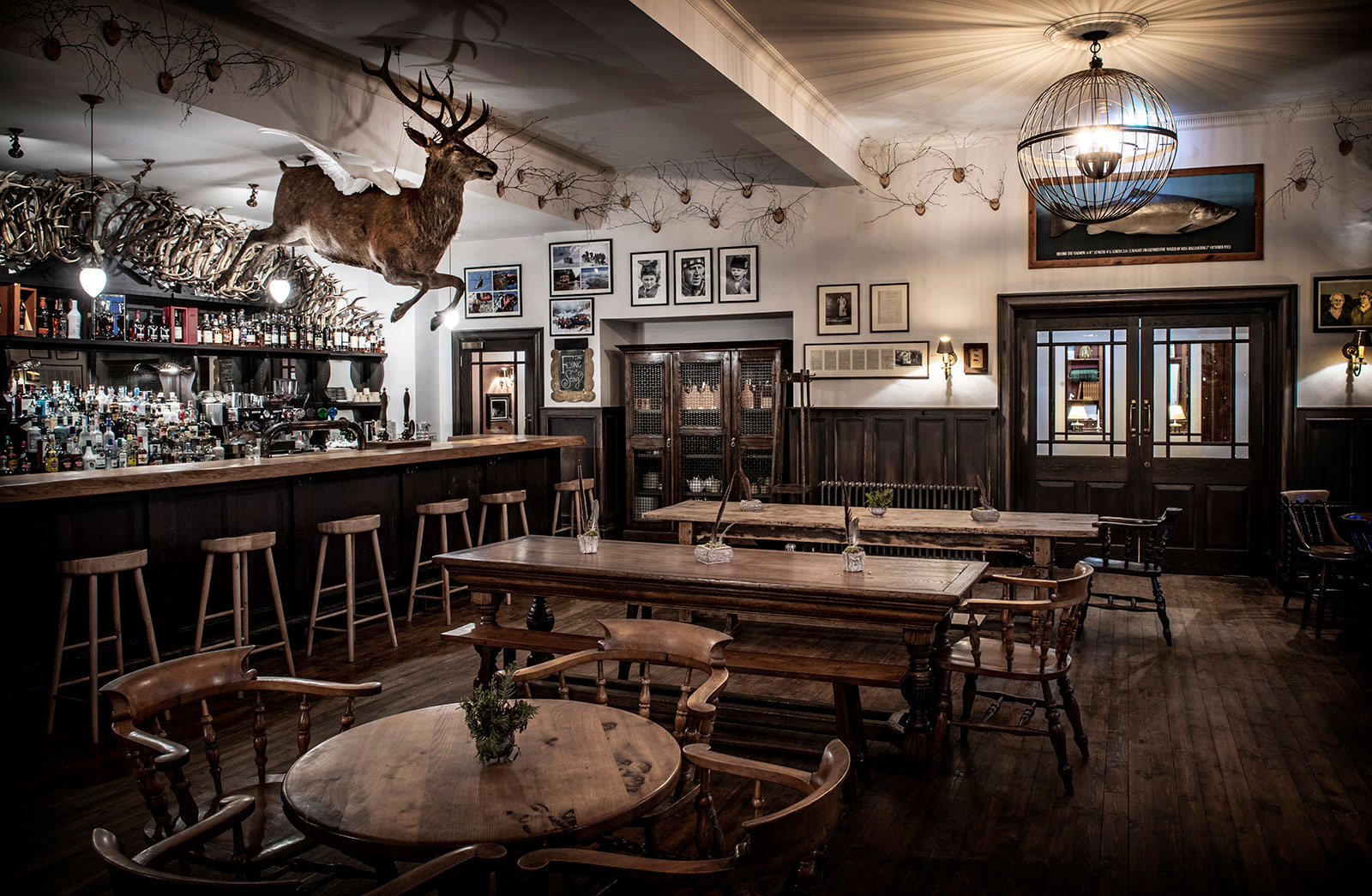 Top: Gallery owners and hoteliers – Manuela and Iwan Wirth. Below: The Flying Stag.

A stuffed stag with white wings leaping in a high arc over the bar counter? Guests sipping an early evening aperitif at The Flying Stag hardly seem to notice him; at any rate, the mood is relaxed to cheerful. Perhaps that’s due to the 180 types of whisky that flow generously here, or to the wacky live music performed by selected musicians. And a little bit of creepiness is allowed, after all, this is Scotland, more precisely the Highlands, home of Loch Ness monster Nessie and various green, gray, black and white ladies who haunt the nights.

The Flying Stag is considered a meeting place in Braemar, a pretty village of 450 souls in the rolling hills of Aberdeenshire, just under 15 kilometers from Balmoral Castle, the Queen’s private summer residence. In fact, Her Royal Highness, Prince Charles and Duchess Camilla have already been spotted in the pub. Not as casual guests passing by for a drink, of course, but on the occasion of the opening, or rather reopening, of the establishment, which used to be a perfectly normal village pub. Today, the who’s who of the international art scene meets under the flying beast created by the American artist James Prosek as a cross between a deer and a snow grouse – a commissioned work by the gallery owner couple Iwan and Manuela Wirth. They are co-owners of the Hauser & Wirth Gallery, founded in Zurich in 1992, which is one of the global players in the art market with branches in London, New York, Los Angeles, Hong Kong, Gstaad, St. Moritz and Somerset. 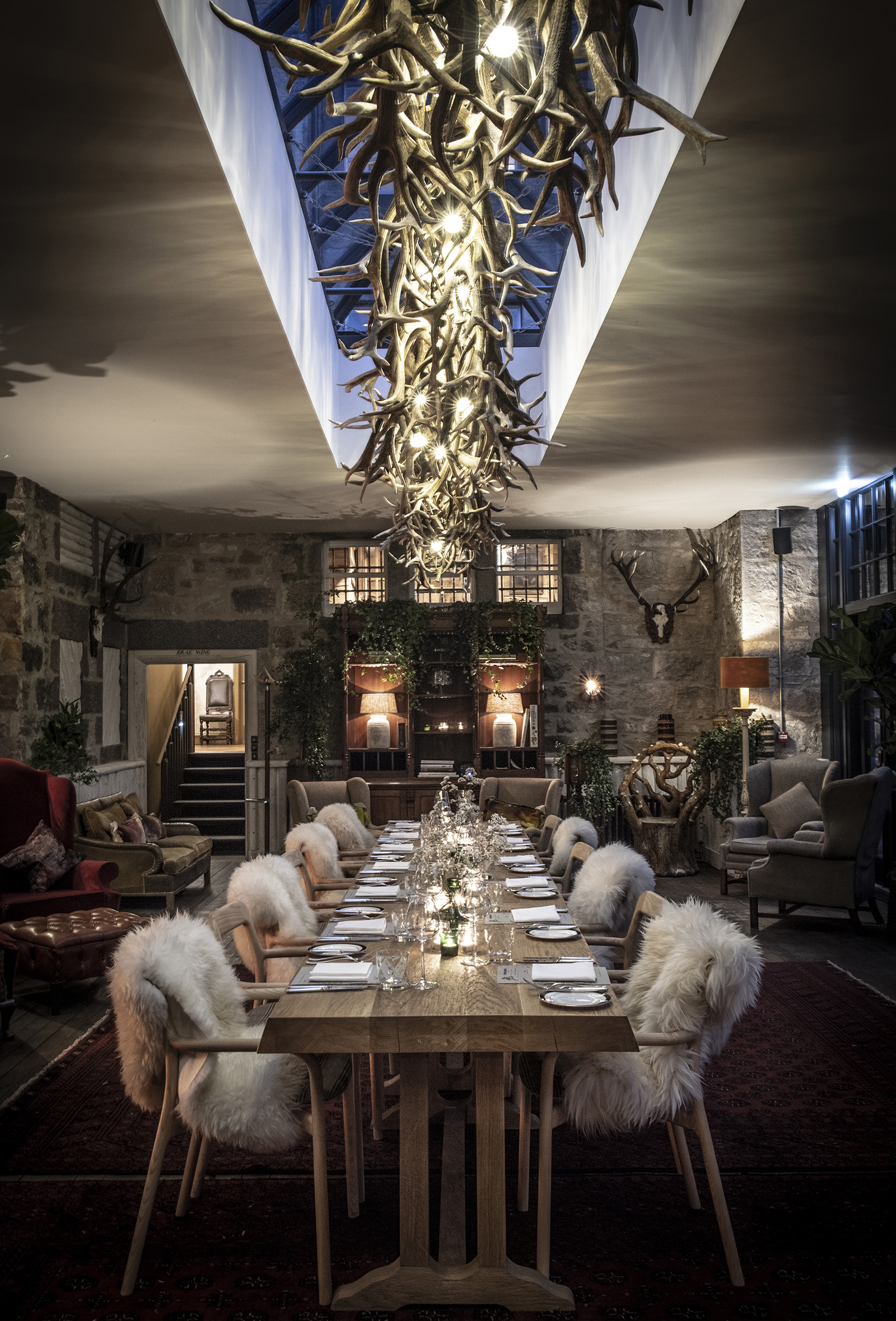 “BECAUSE HISTORY AND STORIES ARE WHAT IT’S ALL ABOUT, A GREAT HOTEL IS ALWAYS A PORTRAIT IN SOME WAY.” 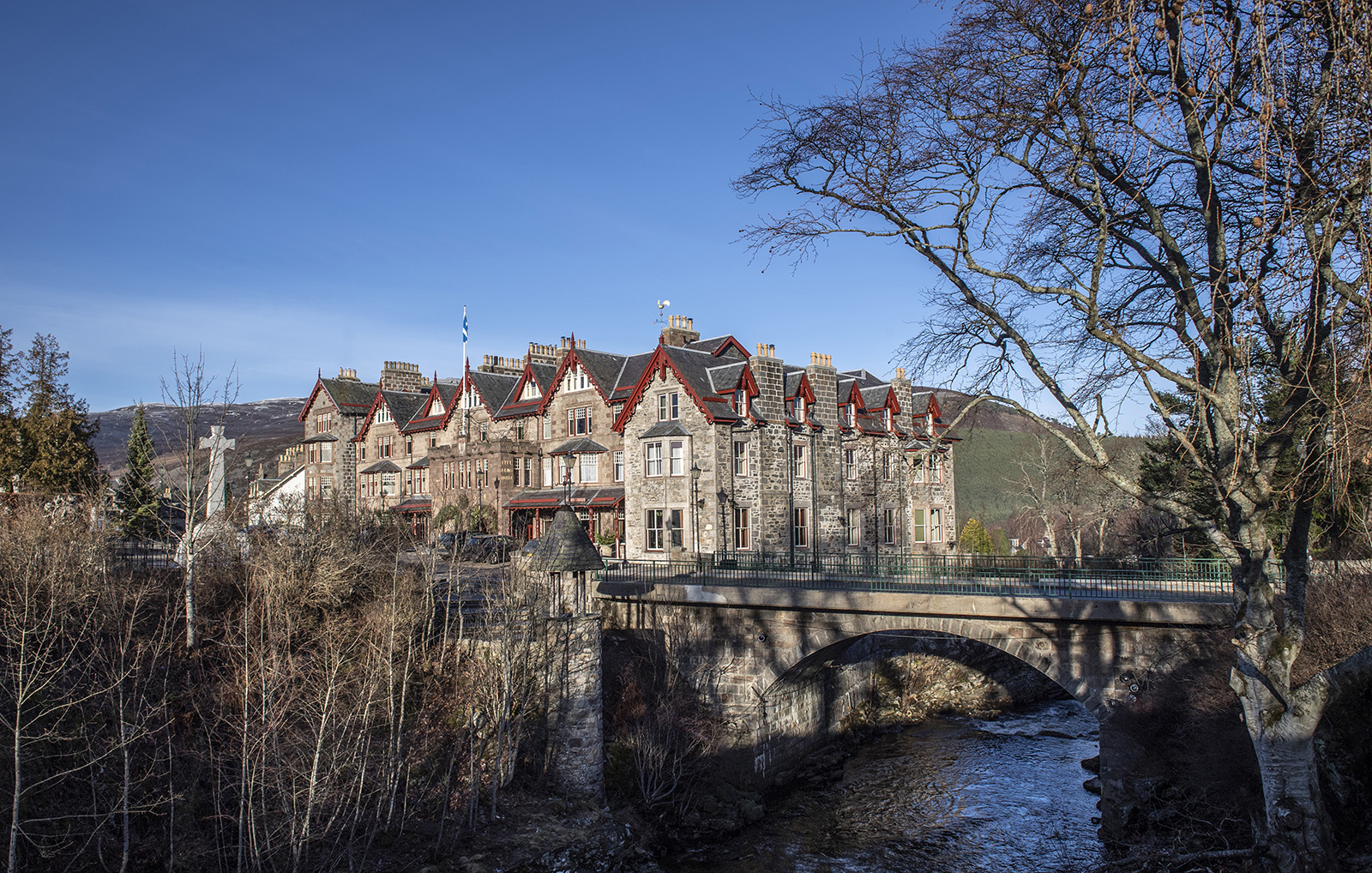 Seems forbidding only from the outside – the rich Victorian building on the river Clunie Water.

It is said in the village that Iwan Wirth drank the worst coffee of his life in this very pub years ago. Shortly thereafter, he bought the pub, including the Highland Coaching Inn, built in 1836 by the Duke of Fife, an imposing stone building with gables and bay windows whose best days were long gone. It took four years to transform the drafty, damp hostelry for bus tourists paying £25 a night into the eccentric luxury hotel The Fife Arms. “We don’t know much about hotels, how they are made and run,” says the landlord, “what we do know is how to create a successful show. That’s what we’re good at.” The Wirth’s aren’t that inexperienced in the hotel business, though. In 2014, they opened Durslade Farmhouse, a chic, art-filled six-bedroom guesthouse in Bruton, Somerset, where one of their galleries, including an artist-in-residence program, is located and where the couple lives temporarily. It has welcomed a good 500,000 visitors since opening nearly eight years ago.

The Fife Arms, however, is in a different league. The wow effect begins in the reception hall, where a large-format portrait of a girl by Lucian Freud hangs just so over a sofa. An oversized mahogany fireplace is covered with hand-carved scenes from the literary works of Scottish poet Robert Burns, and a Steinway grand piano that was designed by American artist Mark Bradford as a topographical map and plays all by itself. In the central stairwell flickers the Red Deer Chandelier, a monumental chandelier made of countless stained-glass antlers filled with neon, which the Wirth’s commissioned from Californian Richard Jackson. In the salon next door, guests sit at afternoon tea with cucumber and curried chicken sandwiches beneath a Picasso self-portrait depicting the aging artist as a musketeer. Chinese artist Zhang Enli painted the kaleidoscopically colorful ceiling landscape in the still damp plaster, and a taxidermied fox creeps across one of the sofa tables. 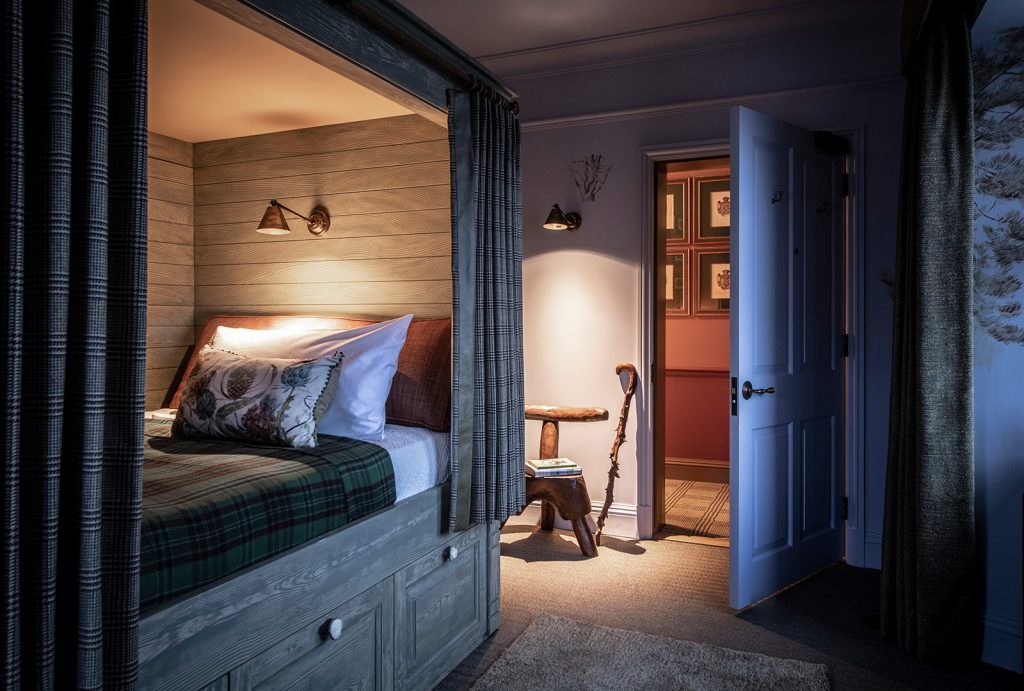 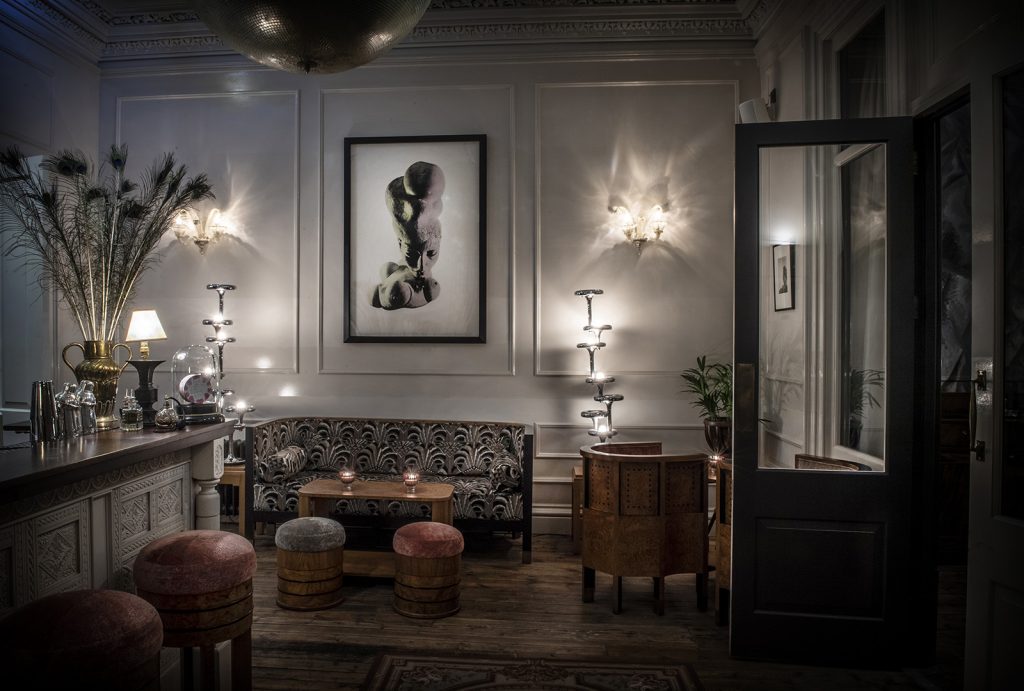 The small Crooft Rooms offer little more space than a bunkhouse. The bar Elsa’s is dedicated to Elsa Schiaparelli.

For the night, 46 completely different rooms and suites are available in a wide range of prices. The word “opulent” hardly suffices to describe the incredible decor of the Indian Suite, the German Emperor Suite, the Prince Albert, Highlander or Duke of Fife Suite. Even the romantic, rather small Croft Rooms, fitted with timbered bunks, are full of wonderful details. London-based interior designer Russell Sage was allowed to run wild: More than 12,000 valuable works of art, antiques and rare objects were distributed throughout the rooms and public spaces, each of which had previously been checked for authenticity by two full-time scientists. Seventy different tapestries were used, including reproductions from the William Morris Archive as well as tweeds and tartan coverings created especially for The Fife Arms by Edinburgh-based textile designer Araminta Campbell. The result is a cross-section of Scottish history as clever as it is quirky. “Because history and stories are what it’s all about,” says Iwan Wirth, “a great hotel is always a portrait in some way.”

And so The Fife Arms combines Scottish heritage with craftsmanship, neo-Victorian pomp and a world-class art collection. Locals not only frequent the former pub, but enjoy roaming the halls and lounges. “We’re open to everyone,” assures manager Federica Bertolini, “our service may be that of a luxury hotel, but many of our staff are from the area and welcome questions from curious visitors.” So you learn that Elsa’s, the chic bar decked out with disco balls and Man Ray photographs, is dedicated to fashion designer Elsa Schiaparelli for a reason. Apparently, the eccentric Italian was a frequent visitor to Braemar, along with her friend, fashion editor Frances Farquharson, who had married into the local Farquharson clan. 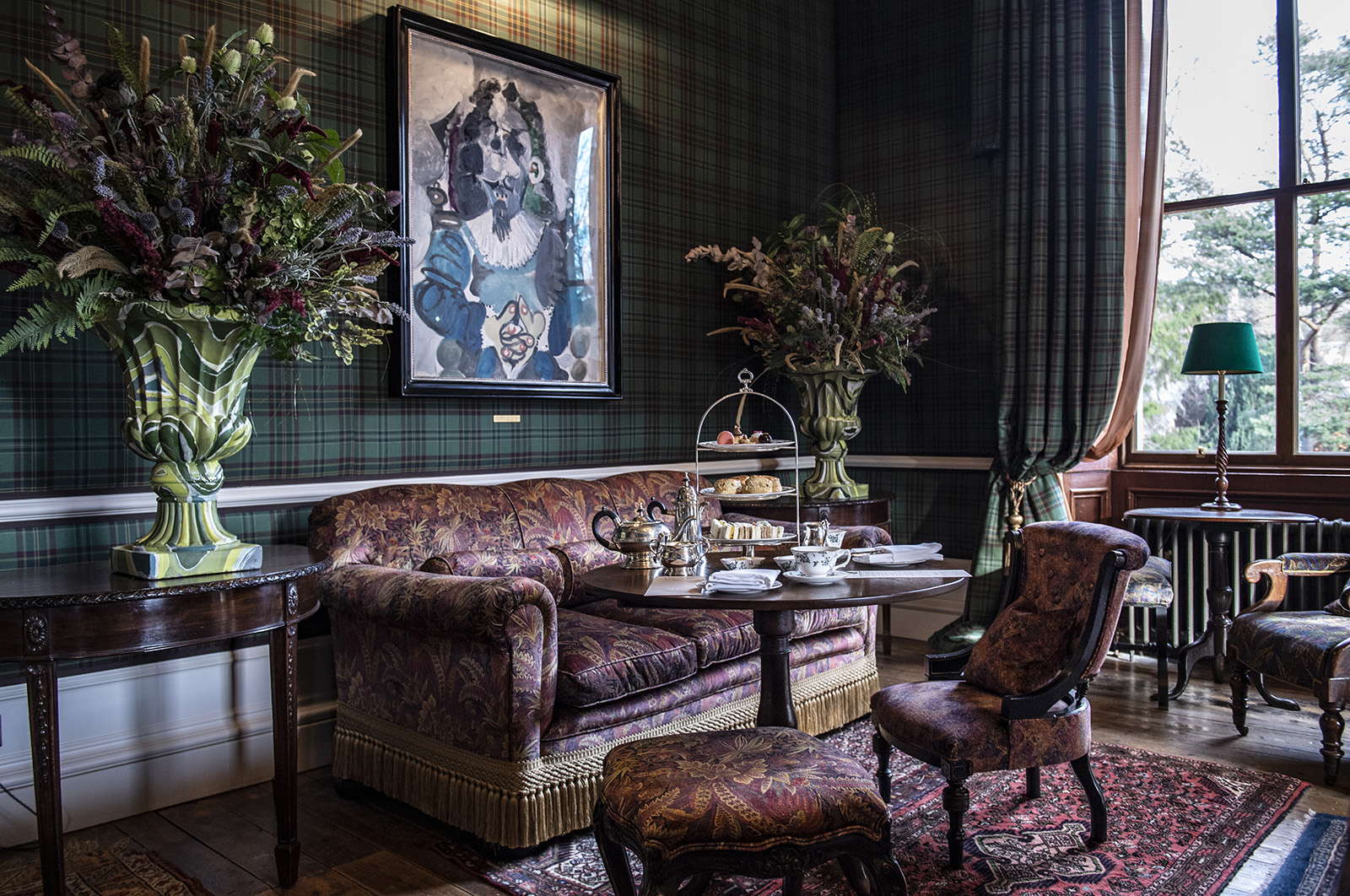 Afternoon tea is served in the plush drawing room under a real Picasso.

If you’re in the mood for something more solid after a prosecco and rhubarb liqueur-based Shocking Pink cocktail, move to the Clunie Dining Room. There, you’ll find the finest Scottish comfort food – Highland beef tenderloin with bone marrow broth or turbot on juniper butter – a second stuffed stag gazing loftily into space, and an incredible all-around mural by Argentine artist Guillermo Kuitca that recalls early 20th-century British Vorticism with its stone-age shades of gray and angular swirling shapes. The restaurant is named after the River Clunie, considered unpredictable, which runs right through Braemar and right past the hotel. Indeed, The Fife Arms stands in the middle of the village, not far from Menzie’s butcher store, the lovely souvenir store The Horn Shop, and the former Scottish Episcopal church of St Margaret’s, which has become a thriving arts and music center thanks to generous donations from the Swiss couple. In general, Iwan and Manuela Wirth, who have long owned a house in neighboring Ballater, are deeply immersed in local life. They are known as passionate fly fishers and beekeepers, wear kilts and are of course present at the Braemar Gathering, Scotland’s most important sporting event, which scores with curious disciplines (log throwing, tug-of-war, hill climb…) and the presence of the Queen.

In pre-Corona years, up to 15,000 spectators came to the Gathering, along with hundreds of musicians and athletes. It’s safe to assume that not only the arena in The Princess Royal and Duke of Fife Memorial Park on the southwestern edge of town, which was built especially for the games, was bursting at the seams then, but also The Flying Stag. It’s quite possible that the policeman, the butcher, the gamekeeper or the housekeeper who adorn the walls in sketches by young London artist Gideon Summerfield were among the guests. No one will have noticed, because for pub visitors, pint and pie are more interesting than portraits – even if they are part of a total work of art that has abruptly made their village the place to be for the international art jet set and their glamorous entourage. thefifearms.com, double room from 250 pounds