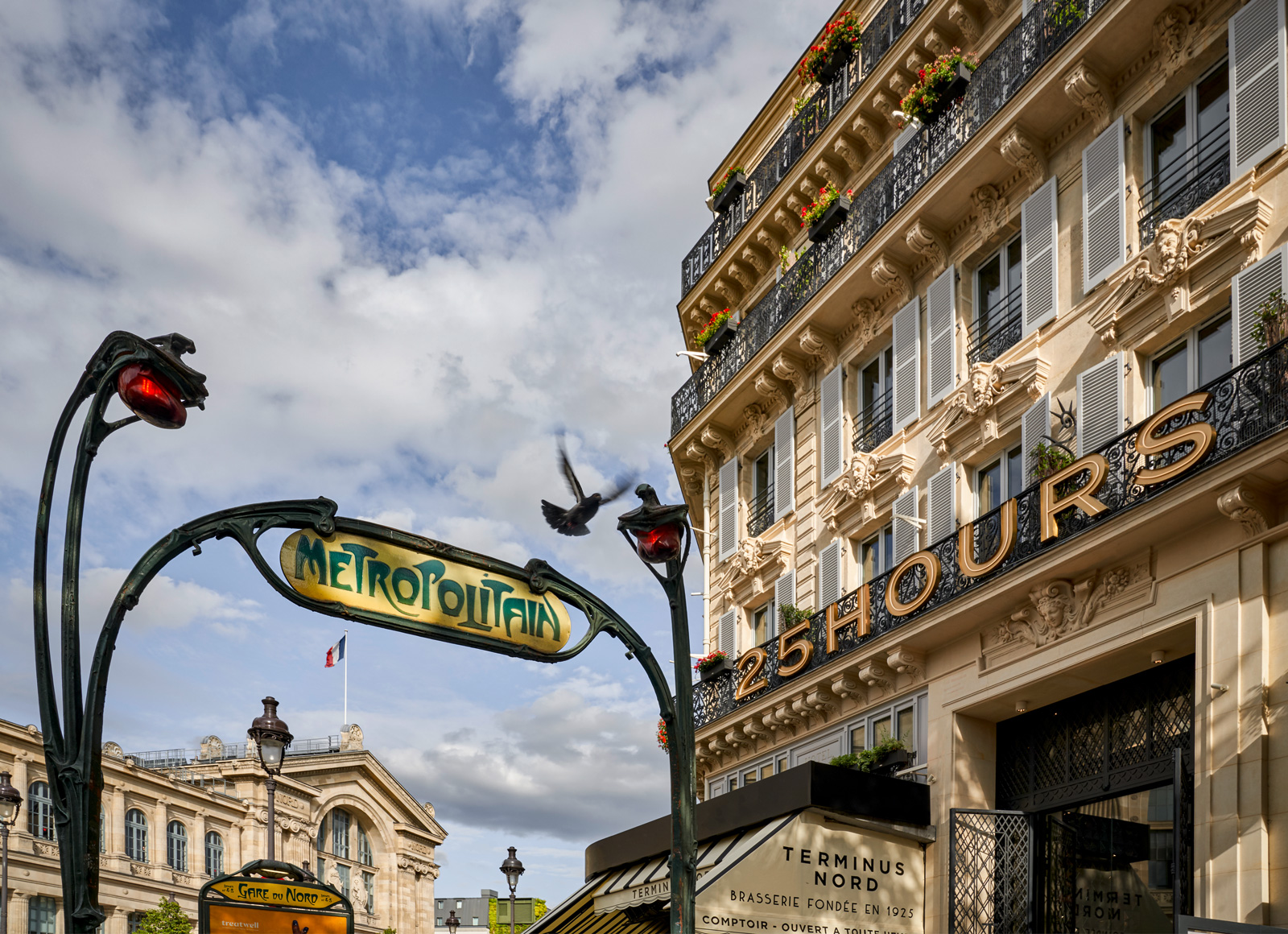 Trendy hotels are not only being built in London or New York. The 25hours brand shows that “made in Germany” can also be successful. Even abroad. 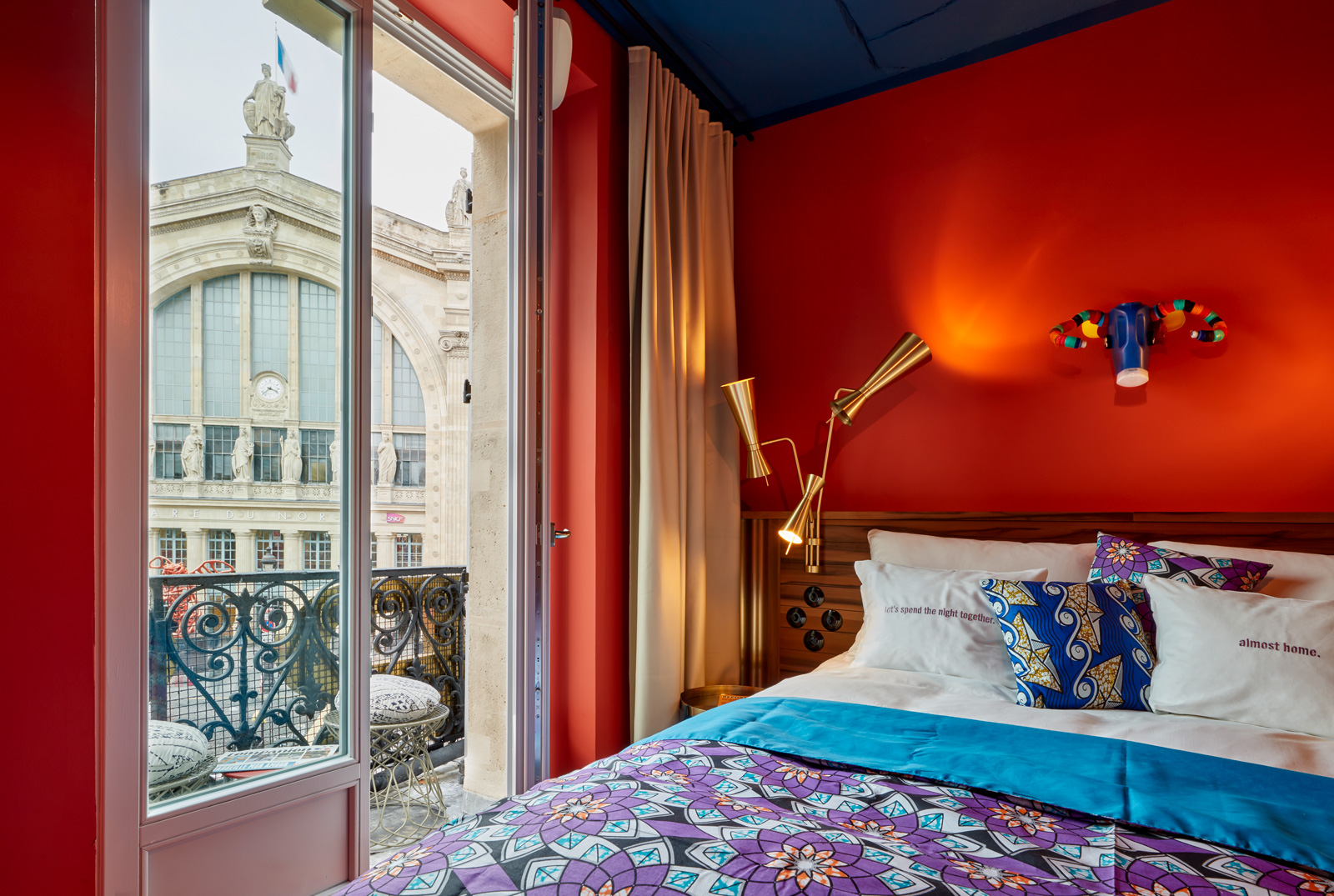 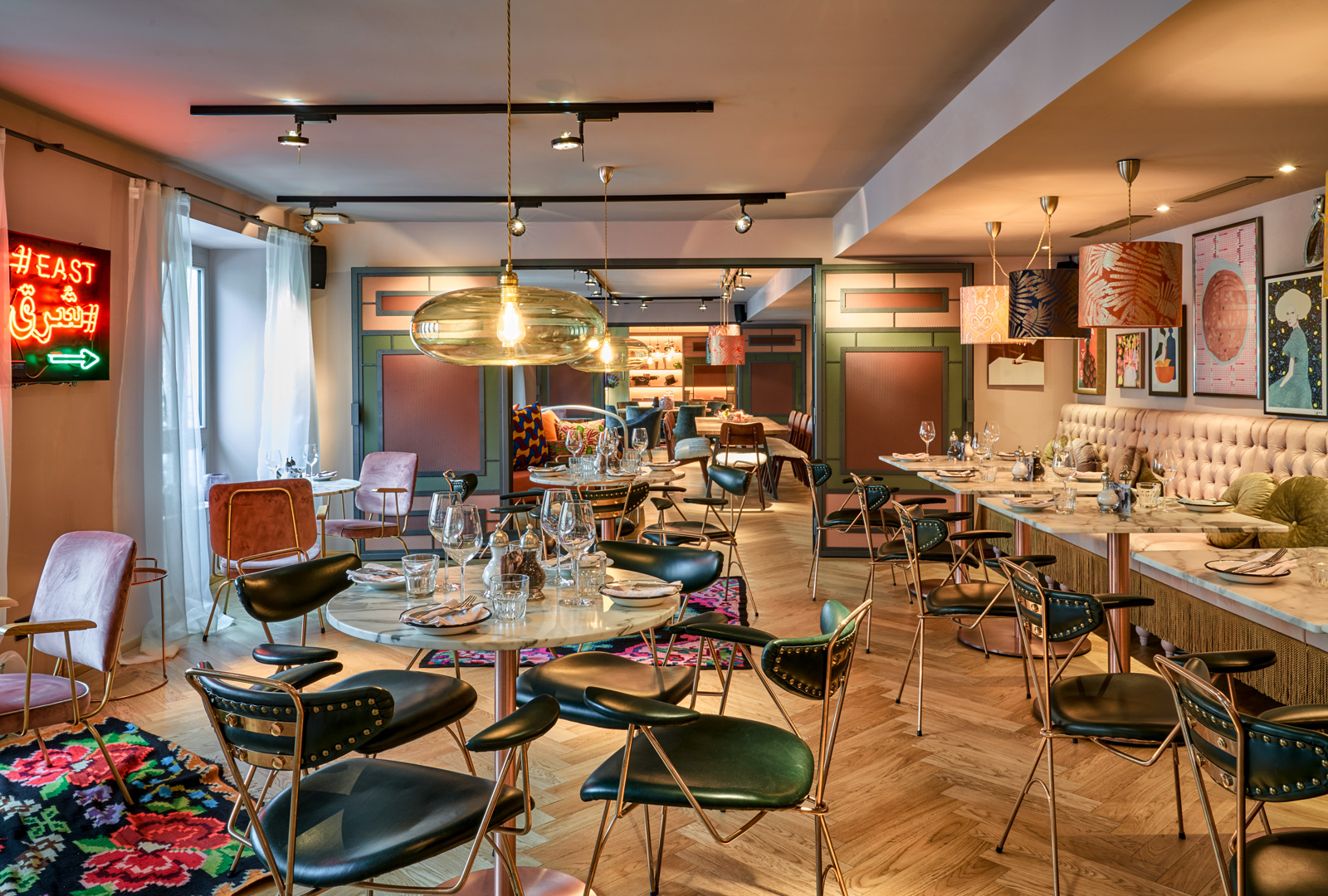 Paris, Gare du Nord. Bien sûr, this is not the Champs Élysées. But a lively, colorful, urban, cosmopolitan and highly Parisian neighborhood right in front of the city’s largest train station. The 25hours Hotel Terminus Nord resides in a magnificent corner building built in 1860 and scores with what distinguishes all the group’s twelve properties to date: individuality, casual ambiance, nice, young, well-informed staff, lots of art on the walls and an ultra-cool bar where, as far as French pandemic rules allow, the action is every night. The lobby, restaurant and the hotel’s 237 rooms reflect the neighborhood’s international influences and the 10th arrondissement’s special blend of cultures: Africa meets Europe in designs, people, music. Booking here means staying in Paris, not the one on the postcard, perhaps, but the real one. 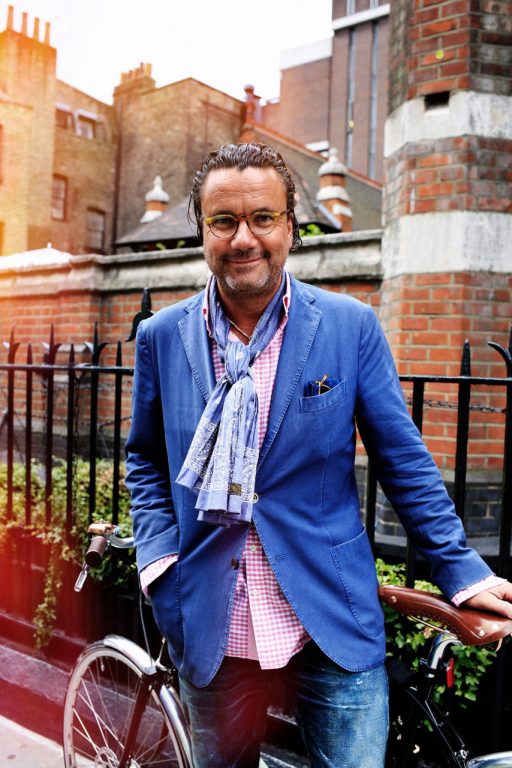 “People don’t want to be lonely in a hotel, they want to meet other people and exchange ideas.”

Founded in 2005, the 25hours Group belongs to the still comparatively young genre of lifestyle hotels: not as dusty as the good old boarding house, not as expensive as a five-star palace, and, above all, not ordinary. “We noticed early on that there are increasingly interchangeable and standardized products in the hotel industry and fewer and fewer unique hotels with personality and soul,” explains Christoph Hoffmann, co-founder and brand ambassador of 25hours, “we wanted to close this gap. Hence, our motto ‘if you know one, you know none’.” What is meant is the opposite of the off-the-peg hotel. In the small company, which sees itself as a creative alternative to the uniformity of the chain hotel industry, diversity is creatively marketed and lovingly cultivated.

This appeals to a clientele that could afford the Baur au Lac in Zurich or the Vier Jahreszeiten in Hamburg. They are design-conscious business people and hip city tourists who enjoy a hotel that, for all its cheerful looseness, also conveys innovation, style and class. Chic design and interesting architecture are as much a part of the concept as the lobby with a living room atmosphere and the Schindelhauer rental bikes in the rooms. Lifestyle hotels not only offer bed and shower, but also create a place where people like to stay, ideally a real hotspot that is also frequented by locals. Berlin is a prime example: in the Monkey Bar of the 25hours Hotel Bikini, even years after its opening, cool capitals and well-informed tourists still sit on the wide steps with a clear view of the zoo’s monkey enclosure. Queues readily form outside the entrance to the Neni restaurant next door. “Eighty percent of our restaurant guests are locals,” says Christoph Hoffmann. 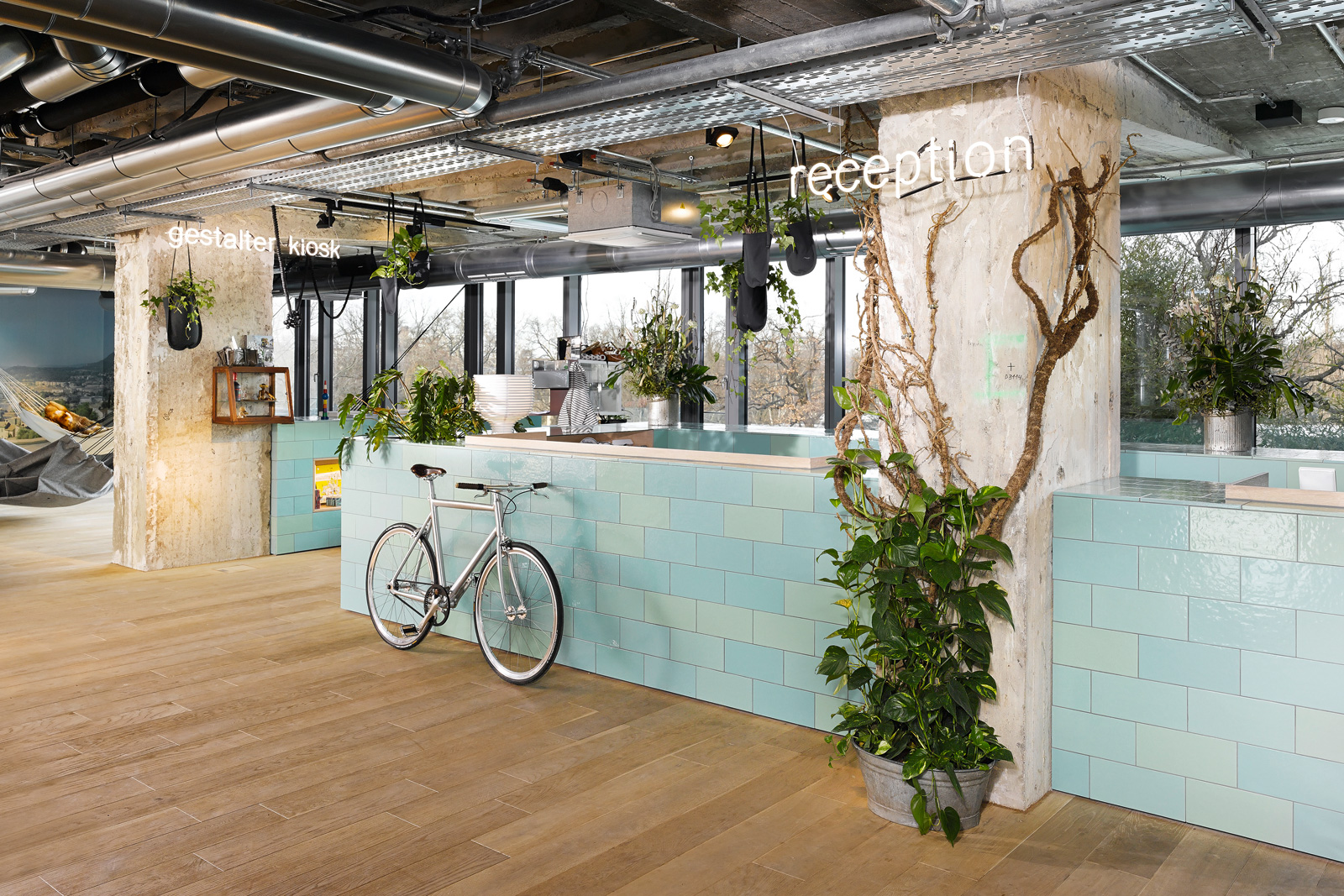 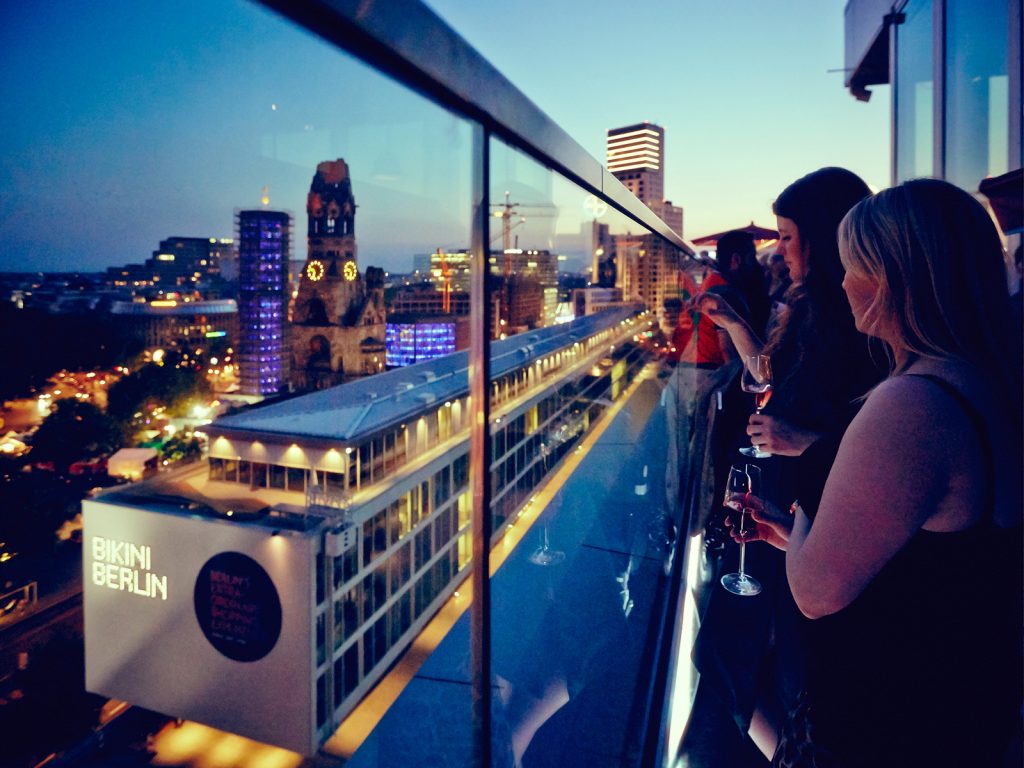 If we were in New York, London or Hong Kong, no one would be surprised. In cosmopolitan cities, hotels have long been more than just places to stay. Their public spaces are also used by the local population, whether for business lunches, work or cocktails at the bar. “People don’t want to be lonely in a hotel, they want to meet other people and exchange ideas,” believes Christoph Hoffmann. The 25hours hotels were born from this idea over a few bottles of wine in a bar in Copenhagen. Also present: Kai Hollmann, a Hamburg based hotelier, founder and operator of stylish hotels such as Gastwerk and The George. He had just opened the first 25hours Hotel in a former Kontorhaus (traditional office building) in the trendy Ottensen district. “We thought to ourselves, hey, this kind of hotel business is viable for the future,” recalls Christoph Hoffmann. Together with Hollman, Ardi Goldmann and Stephan Gerhard, he opened the second 25hours Hotel in Frankfurt: a 49-room property that enjoys a loyal regular clientele consisting not only of bankers.

The 25hours hotels continue to expand. In Vienna, the first really large house with 220 rooms is added and the group is represented with two hotels in Zurich. What now, they asked themselves, when the interesting locations in the German-speaking countries were through. Do we want to go across the pond? Do we want to go to Asia? The answer was yes, but only with the support of a strong partner. “We initially considered cooperating with one of the luxury hotel groups,” says Christoph Hoffmann, “but neither Peninsula nor Mandarin Oriental or Four Seasons had any interest in a second brand.“. 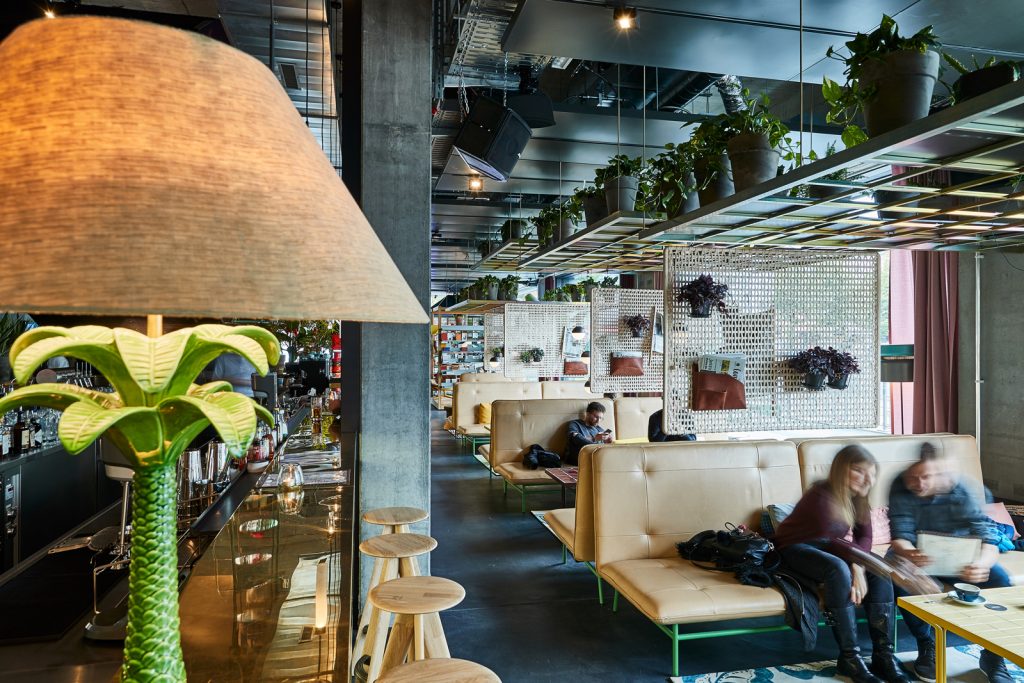 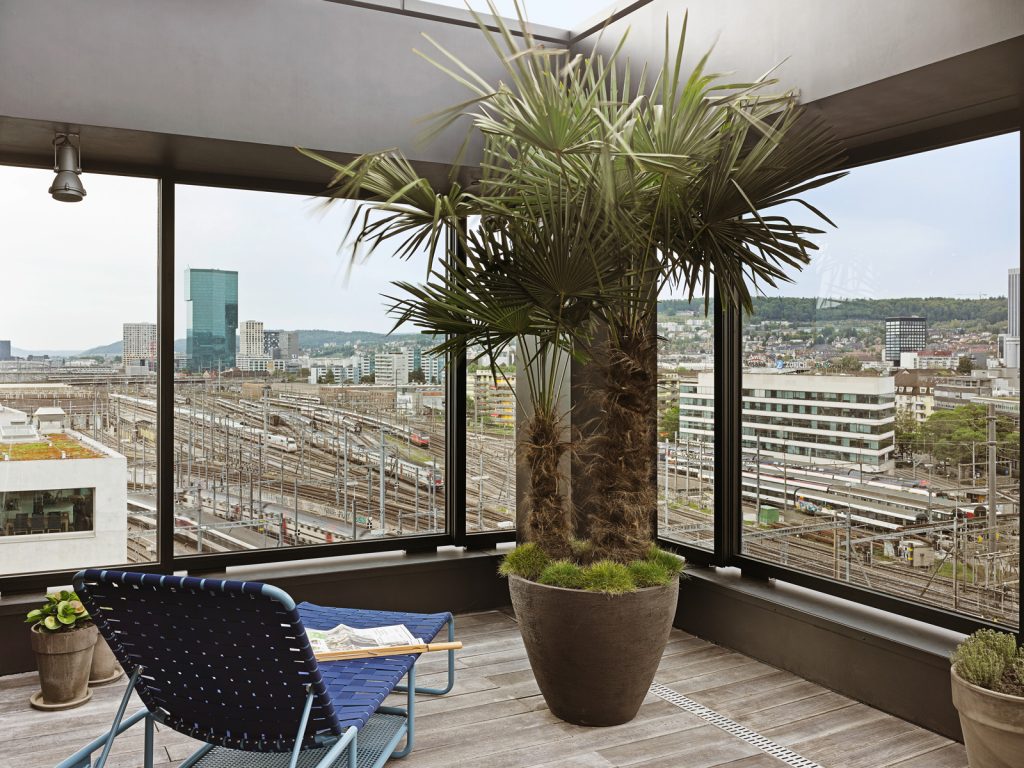 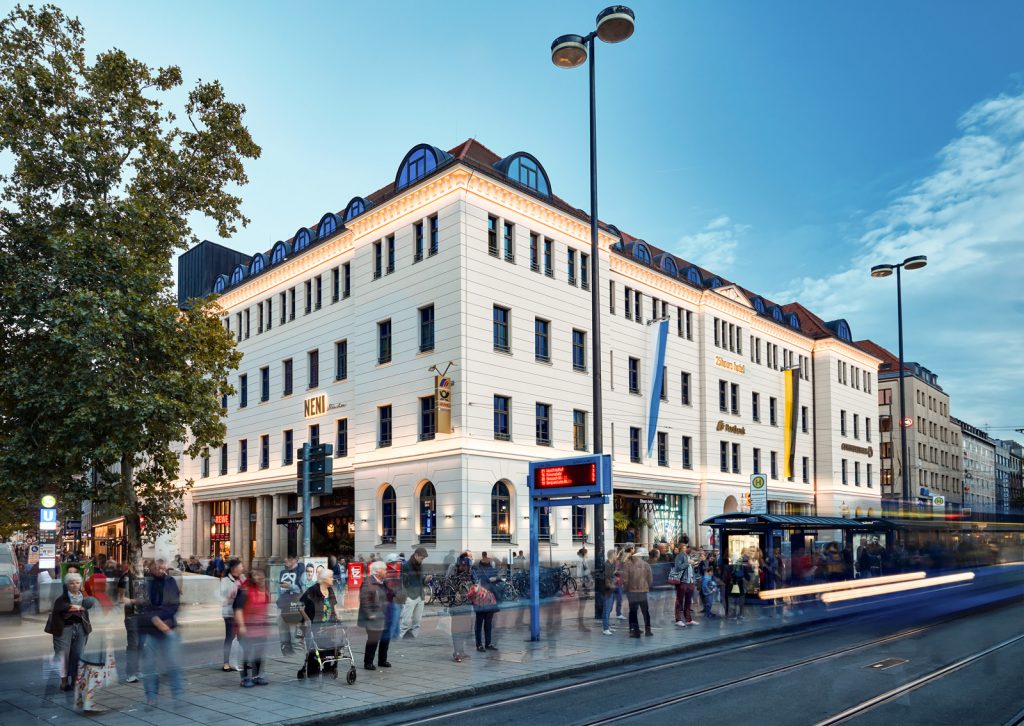 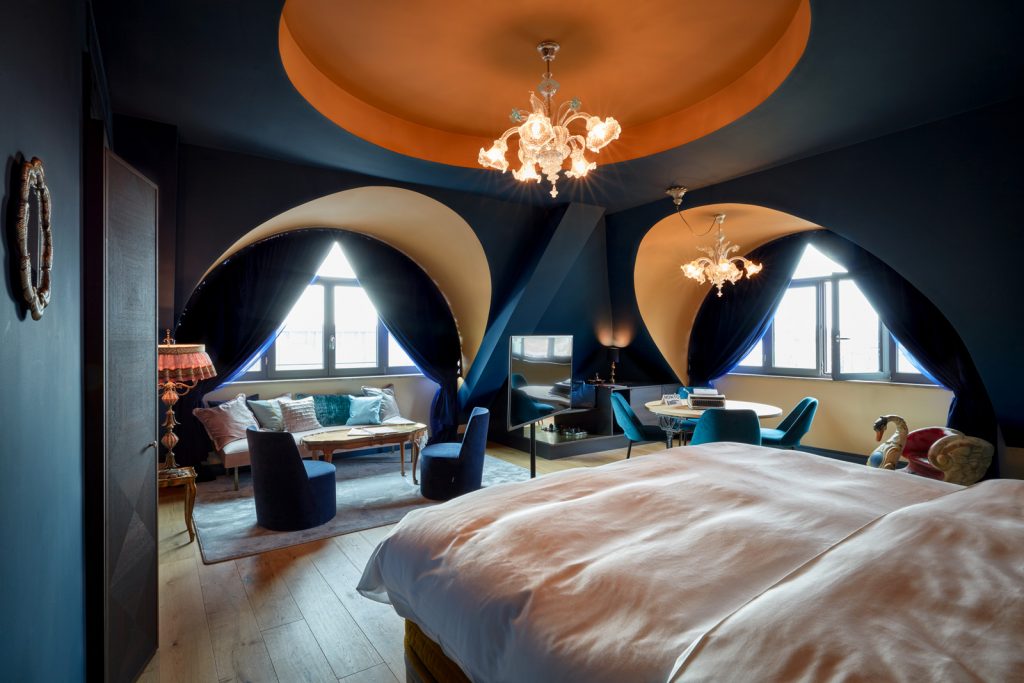 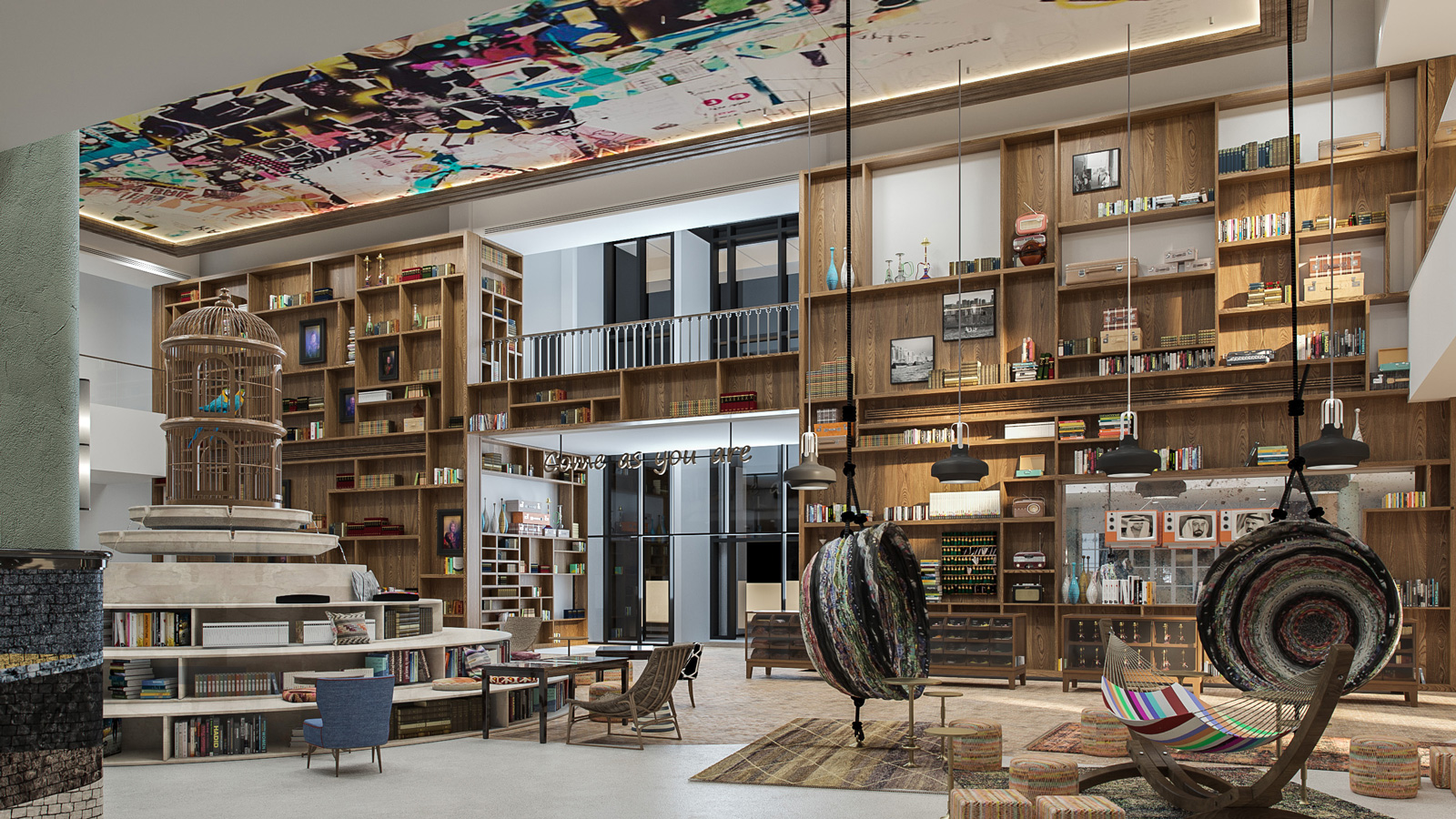 Dubai: opening before the end of 2021. Photo: DWTC

In 2016, Accor CEO Sébastien Banzin put almost 35 million euros on the table for a 30 percent stake in the 25hours Group. In one fell swoop, destinations such as Melbourne, Miami or Mumbai are within reach. But first, one of the most sought-after hotel locations in Europe is on the agenda: Munich. The Royal Bavarian, the group’s tenth hotel, opened in November 2017, residing in a historic building just opposite the main train station that served as the “chief post office building and royal telegraph central station” around 1860. In the 165 rooms, divided into the categories of servants’ quarters, ruler’s rooms, noble chambers or suites, stately design is paired with ironic-iconic allusions to Bavaria’s royal heritage – light fixtures, faucets and wallpaper are so well recreated that the House of Wittelsbach thought about suing for their trademark rights. The kiosk on the first floor, on the other hand, harkens back to the tradition of old grand hotels and stocks a fine assortment of magazines, books and unusual souvenirs, in addition to the things hotel guests might need in an emergency.

The seemingly carefree mix of coolness, innovation and genuine hospitality goes down well in the oversupplied hotel market as well as by guests. In Munich and elsewhere, sales and occupancy rates exceed anything anyone had dared hope for, and plans for new openings in Dubai, Copenhagen and Melbourne are ready in the drawer. Then Corona puts an abrupt end to the boom. In the fall of 2020, occupancy at The Royal Bavarian plummets to an average of 20 percent, with six arrivals on some weekdays and even fewer on weekends. 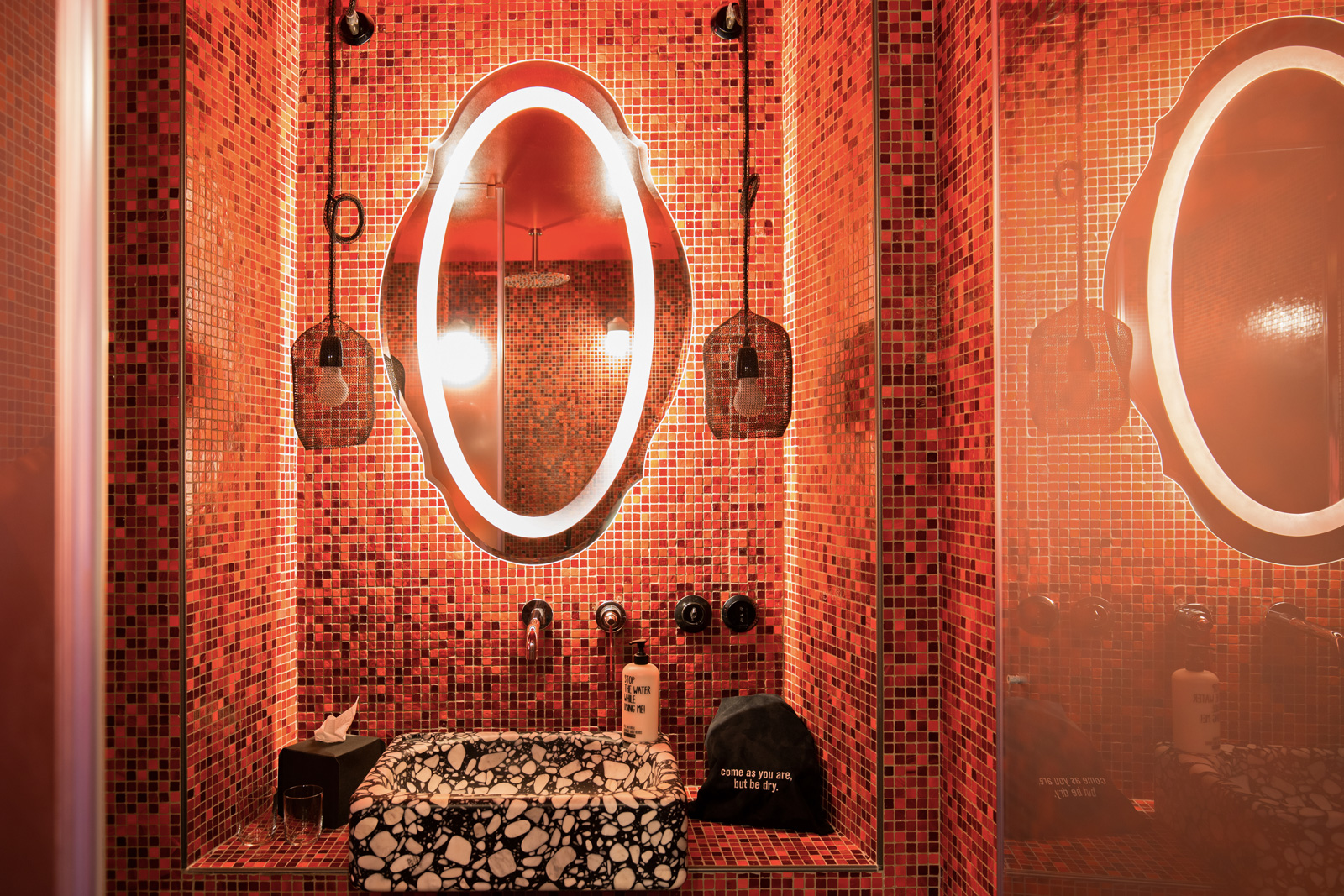 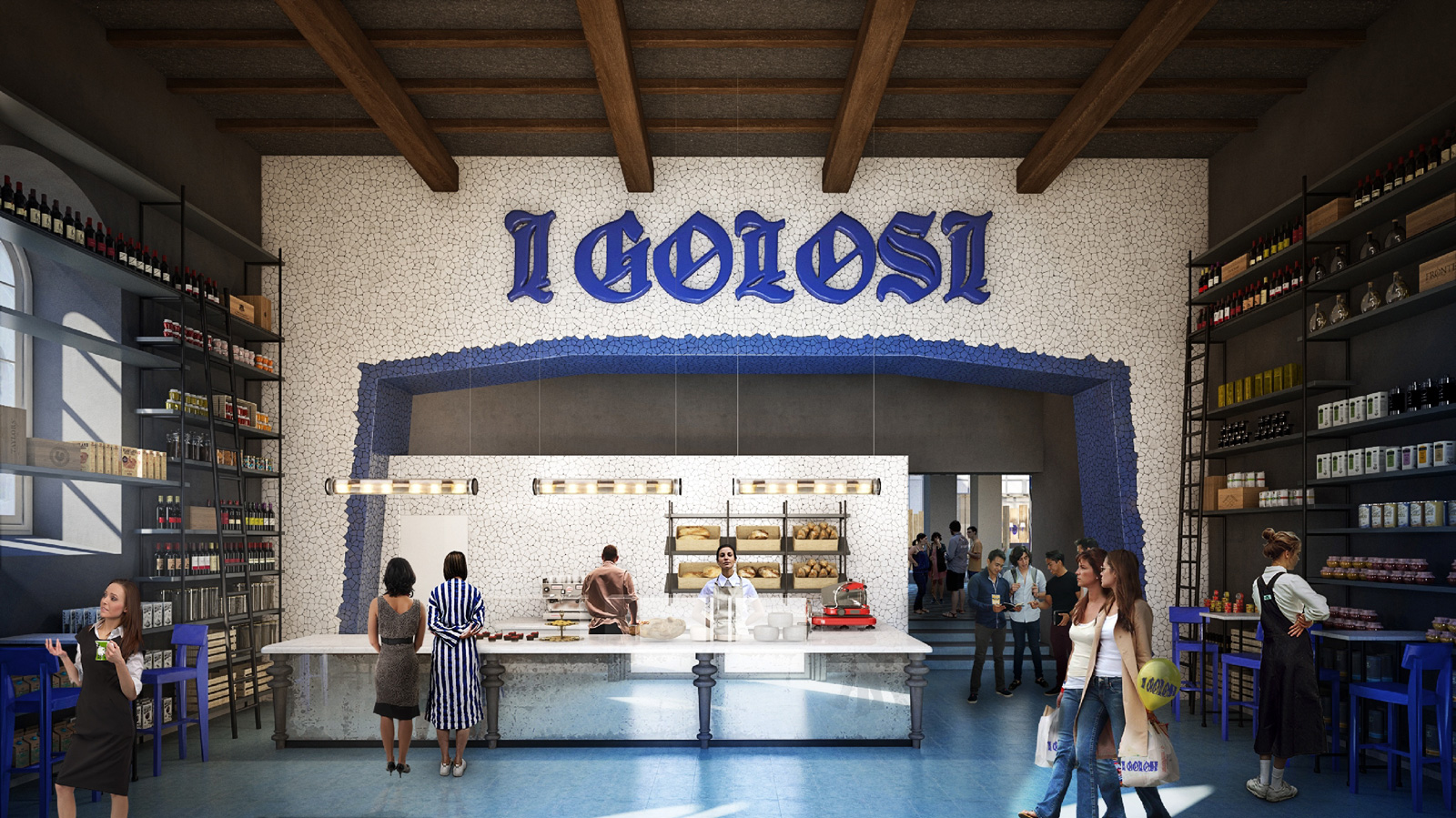 Tempi passati. “Our hotels in Berlin, Hamburg and Cologne had a great summer season, occupancy was over 90 percent, something we’ve never seen before in August,” says Christoph Hoffmann. He also sees the crisis as an opportunity: “It is precisely individual players like us who can strike out in new directions, develop different products and respond more quickly and flexibly than large hotel groups to a changed, more sustainable way of traveling“.

In mid-September 2021, the 25hours Hotel Piazza San Paolino opened in Florence. Like so many of the group’s properties, it stands not far from the main train station in the very authentic but little-known Santa Maria Novella district. It occupies the ancient halls and rooms of a three-part building complex and was furnished by the famous Milanese designer Paola Navone. This time, the source of inspiration was Dante’s Divine Comedy: scenes from heaven and hell alternate playfully, leading between virtues and vices through Dante’s world, which is as loopy as it is highly sophisticated. Surrounding the San Paolino restaurant with its huge glass dome are a green courtyard garden, a classic Negroni bar, and a typical alimentari (grocery store) in the piazza outside with a small drink and food menu for hotel guests and locals.

“Even in our first Italian house, we do nothing but what good hotels have always done,” explains Christoph Hoffmann, “offer people a place where they feel at home – whether for two days or two months.” This also includes attractive offers: With the promo code sweetdreams, guests receive a 15 percent discount on the best available rate at all 25hours hotels – until the end of 2021. 25hours-hotels.com