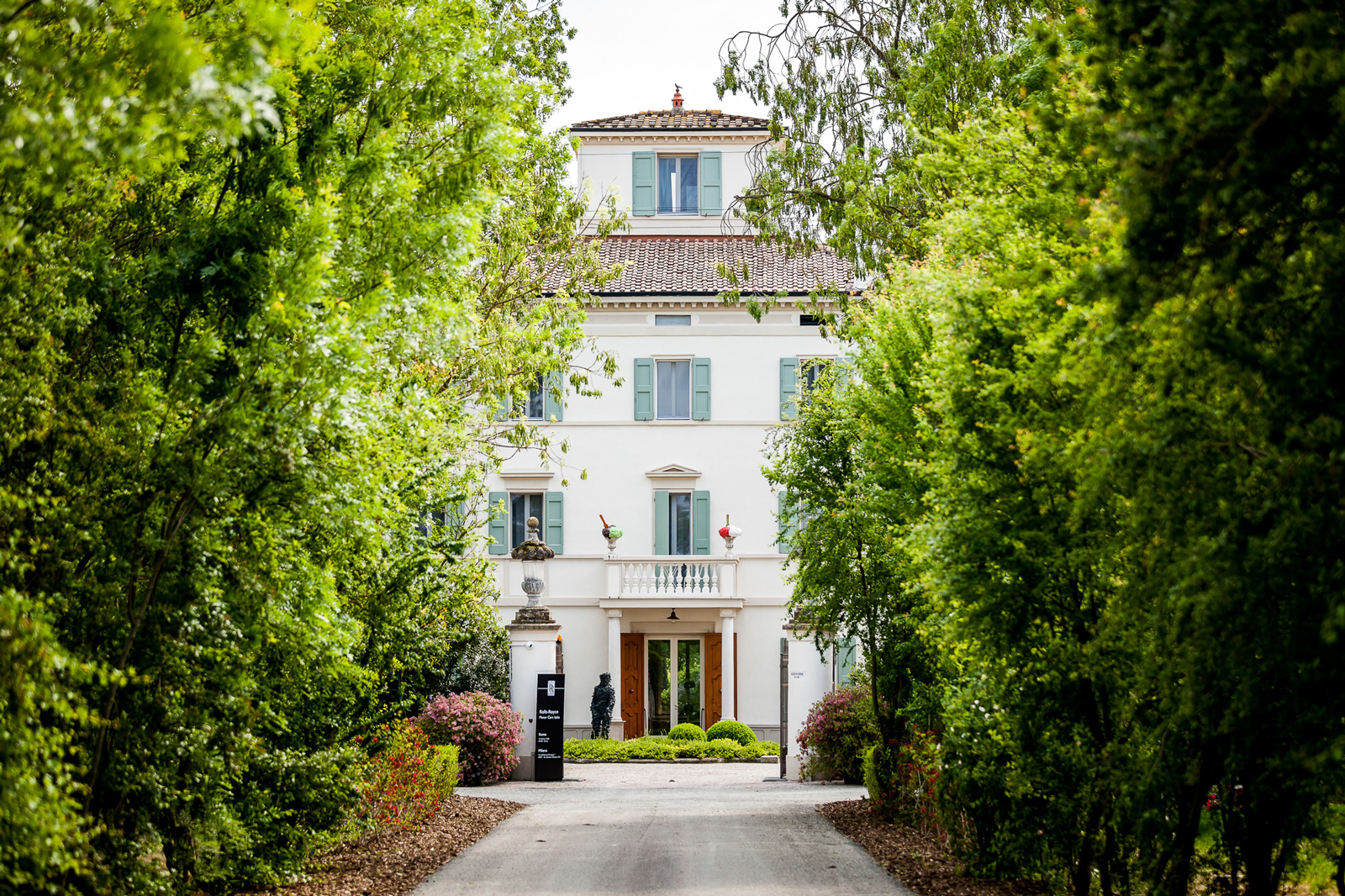 Casa Maria Luigia is a feast for all the senses, hosted by
star chef Massimo Bottura and his wife Lara Gilmore.
And it is she who is pulling the strings here. 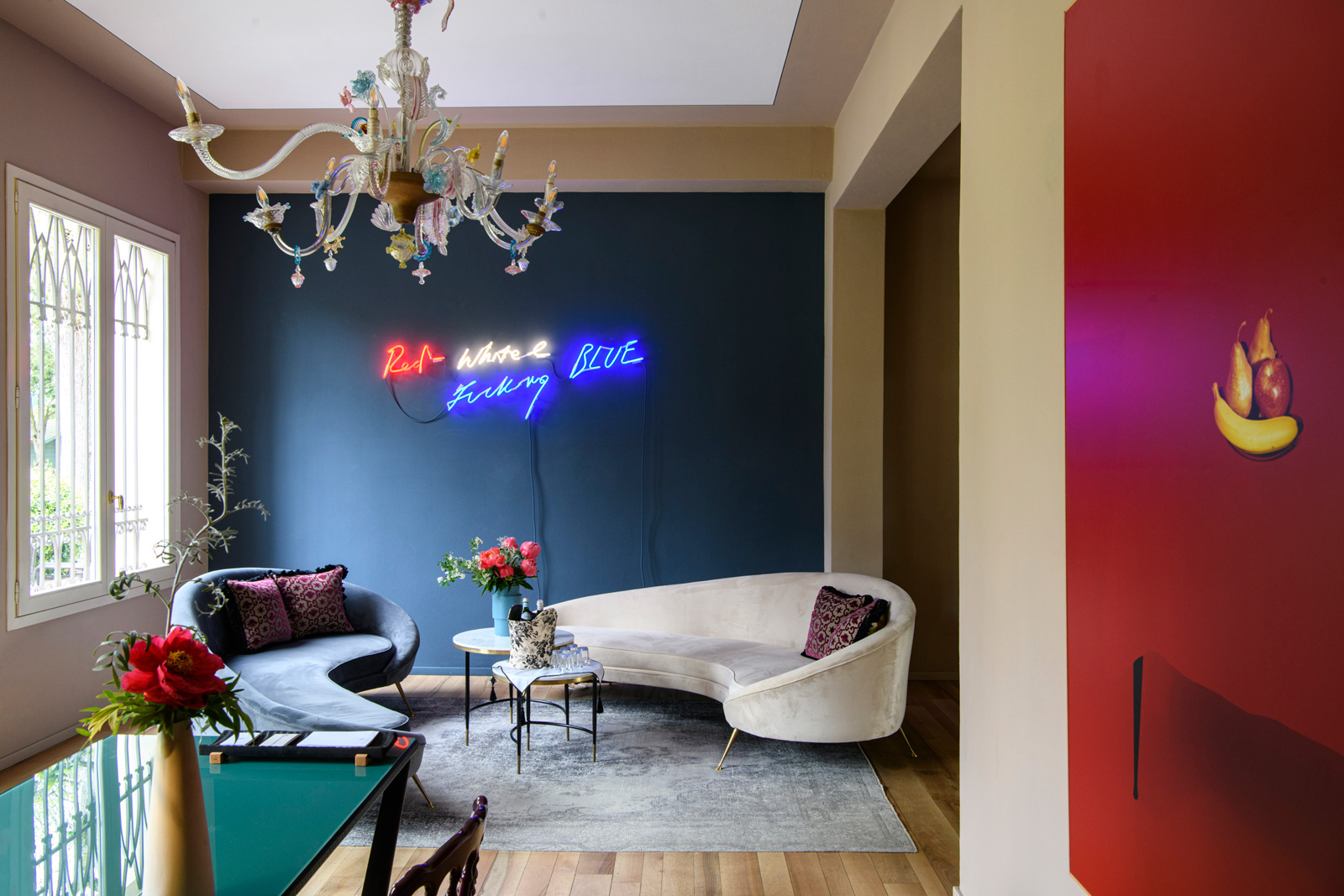 Casa Maria Luigia stands in a park full of trees. In one of the salons, a neon work by Tracey Emin shines above
curved sofas from the 1940s. Photos: Stefano Scatà

There are cookbooks and art magazines in the lounge, ripe Parmesan cheese and iced white wine in the fridge, and 12,000 vinyl records from the landlord’s collection in the music room. “Benvenuti,” his wife calls out to arriving guests with an accent that is only slightly American. Welcome to Casa Maria Luigia, a chic guesthouse set in a park full of trees in the fertile and lush green countryside of Emilia-Romagna. It belongs to Massimo Bottura and Lara Gilmore, who have not only made their museum-quality art collection accessible, but have also addressed a real deficit in the region. 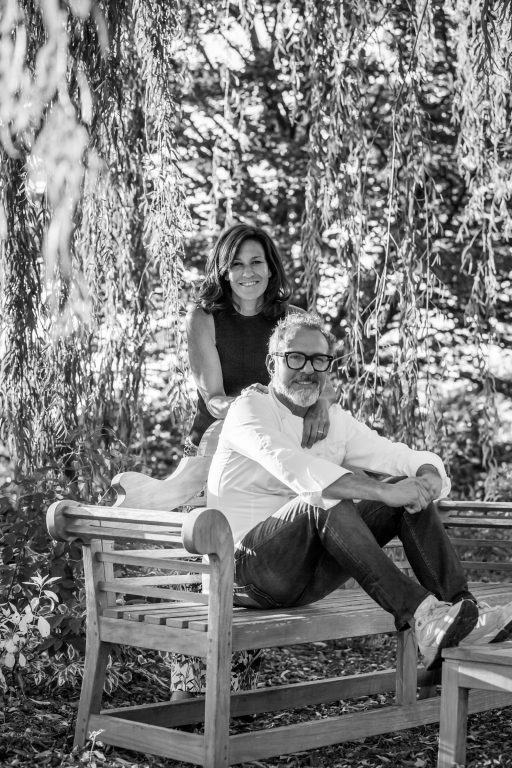 “Whoever stays with us shares
our lifestyle.” 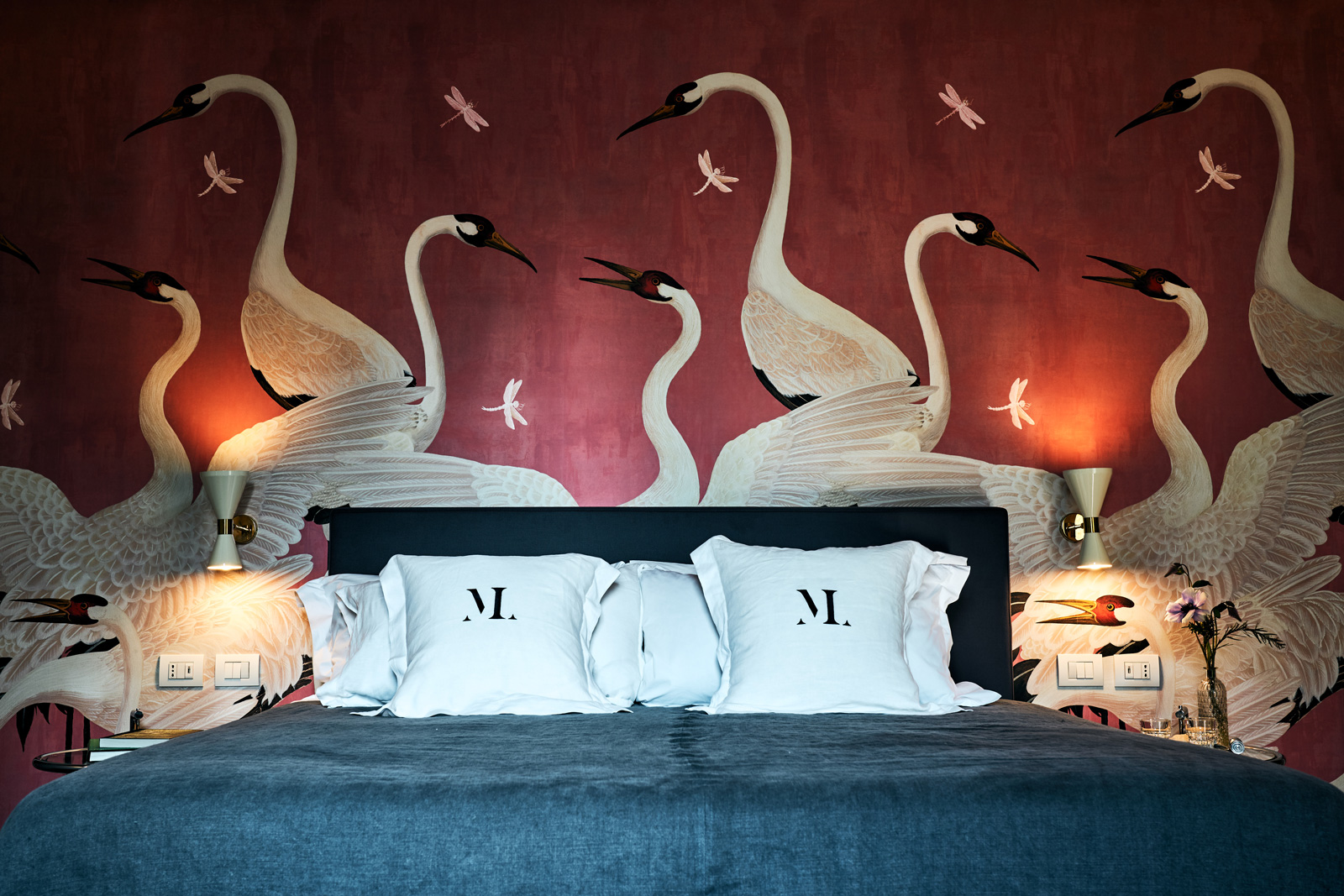 For Italy fans and gourmets heading for Modena on their travels have had a problem up to now: no decent hotel far and wide. Anyone who had dined at the three Michelin-starred Osteria Francescana for several hundred euro had to make do with a third-class hostel or drive all the way to Bologna. Stupid, thought Massimo Bottura, patron and chef of the Osteria. What should he tell his guests, who called from Dubai, Denver, or Dusseldorf and already asked for adequate accommodation when they booked their table? “Venite a casa mia,” he has been able to proclaim for just under two years, and although he and his family naturally occupy an entirely private home of their own, that is not completely a lie – Casa Maria Luigia, named after his mother and the Duchess of Parma, is not just his. It is a house that suits his taste and that of his wife 100 percent, and where every guest may temporarily feel like a friend of the family. 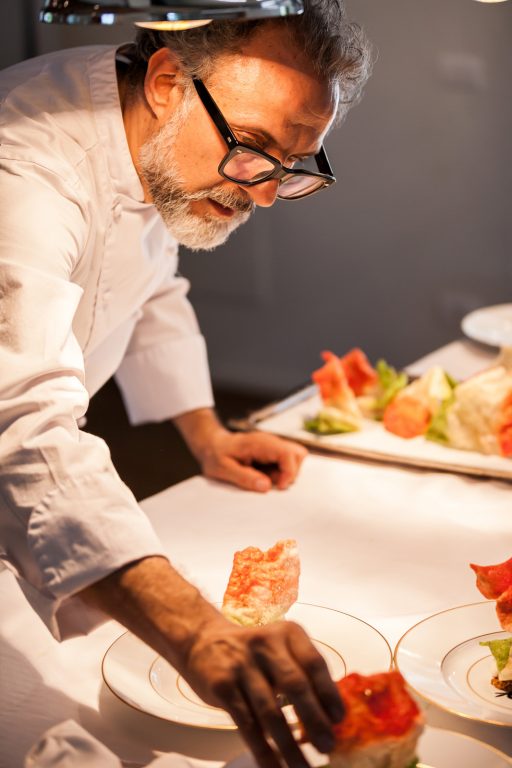 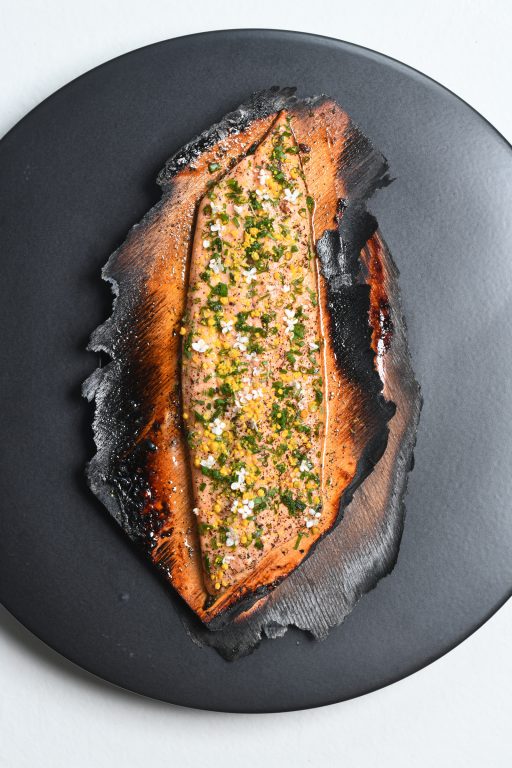 The honey trout is one of the popular dishes at the Sunday brunch. Photo: Sandro Michaelles

“Whoever stays with us shares our lifestyle,” explains Lara Gilmore, who has been the driving force behind the project from the beginning and now runs it as a good-humored hostess, “our music, our furniture, as well as the art that we have collected together and that inspires us.” The Washington-born American was not active in the art scene for nothing before she met the then rather unknown chef in New York in 1993 and let him take her to the Italian province. The fact that Casa Maria Luigia became a pleasantly “unmuseum-like” but nevertheless remarkable art hotel is largely thanks to her. In fact, their art now attracts almost as many people as the famous Bottura cuisine, which is, of course, also available at the osteria offshoot Francescana at Maria Luigia. The nine-course tasting menu, featuring many Bottura bestsellers, is served in the villa’s former coach house-at simply set communal wooden tables by Alessandro Mendini, under lamps by Ingo Maurer, and in front of the 13-panel silkscreen “The Last Supper,” by British breakthrough artist Damien Hirst, which shows the multiply enlarged packages of freely invented medicines. 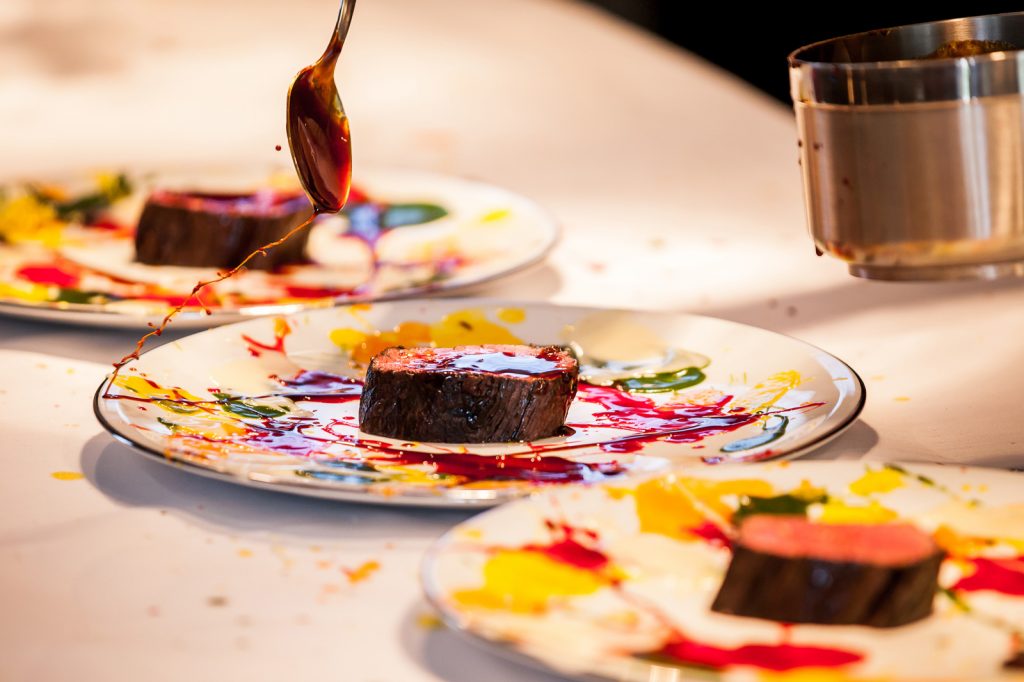 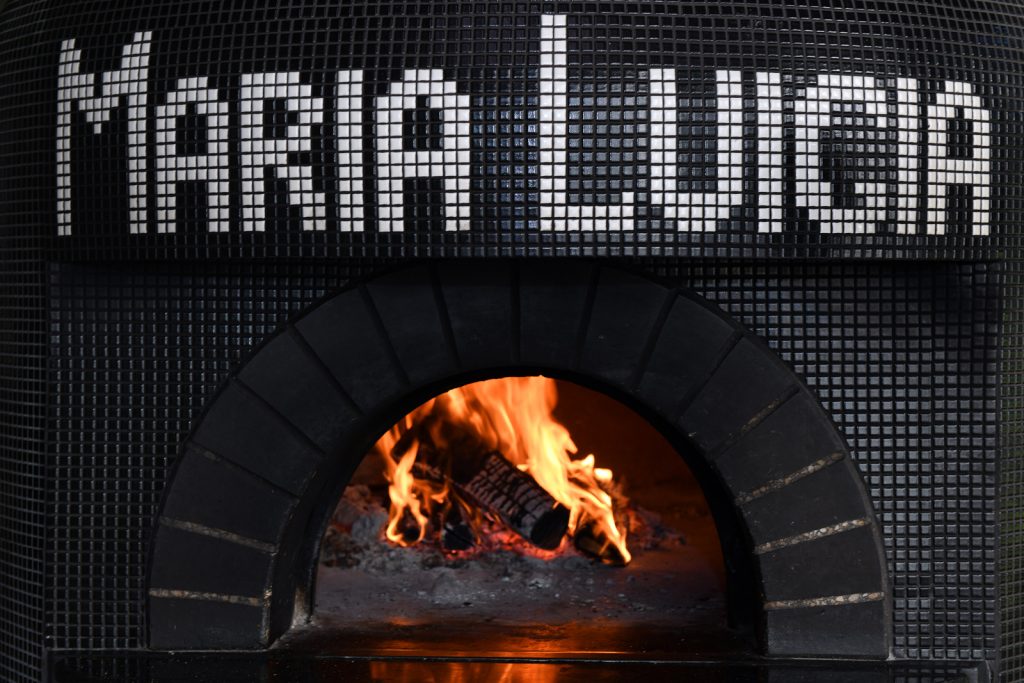 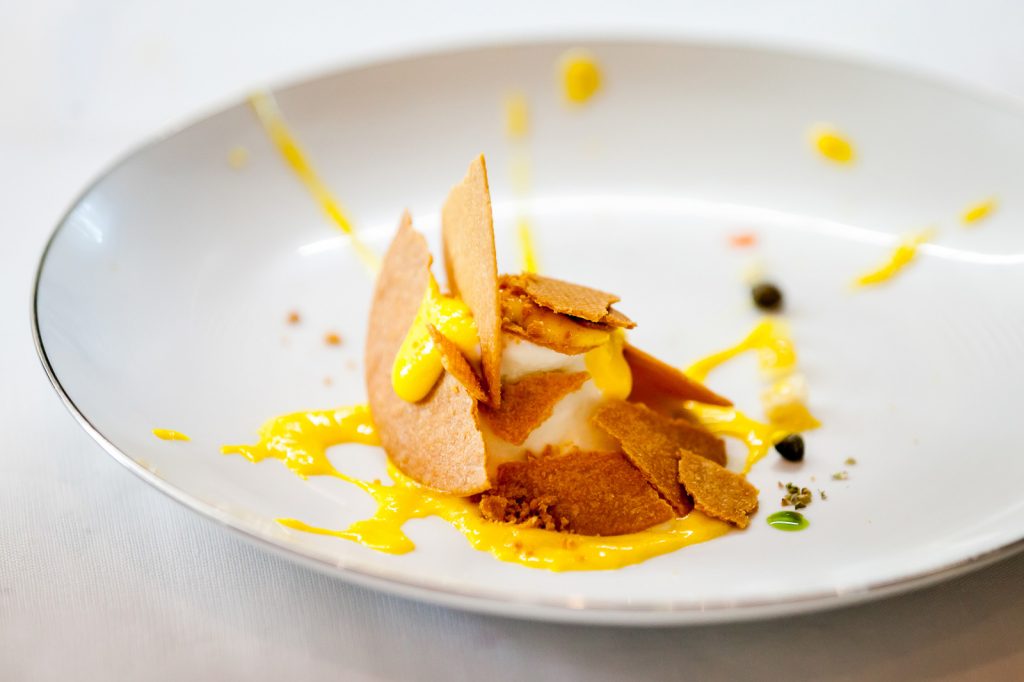 Damien Hirst is not the only big name in the Gilmore/Bottura collection. Driving along the tree-lined avenue leading to the 18th-century estate and passing through the cast-iron gate into the hotel’s front courtyard, visitors are greeted at the entrance by Sandro Chia’s leaf-clad bronze “Babbo”. On the balcony directly above are two oversized sundaes – a playful ceramic work by the young southern Italian Giorgio di Palma. A neon work by Tracey Emin flickers in the reception area; in a corridor, marines stand at attention in Vanessa Beercroft’s photograph “VB39 US Navy SEALs”; a collage by Vik Muniz hangs in the glassed-in atrium; and in the lobby, Ai Weiwei’s large-scale Lego triptych “Dropping a Han Dynasty Urn” hangs beneath a vaulted ceiling decorated with stucco and frescoes. 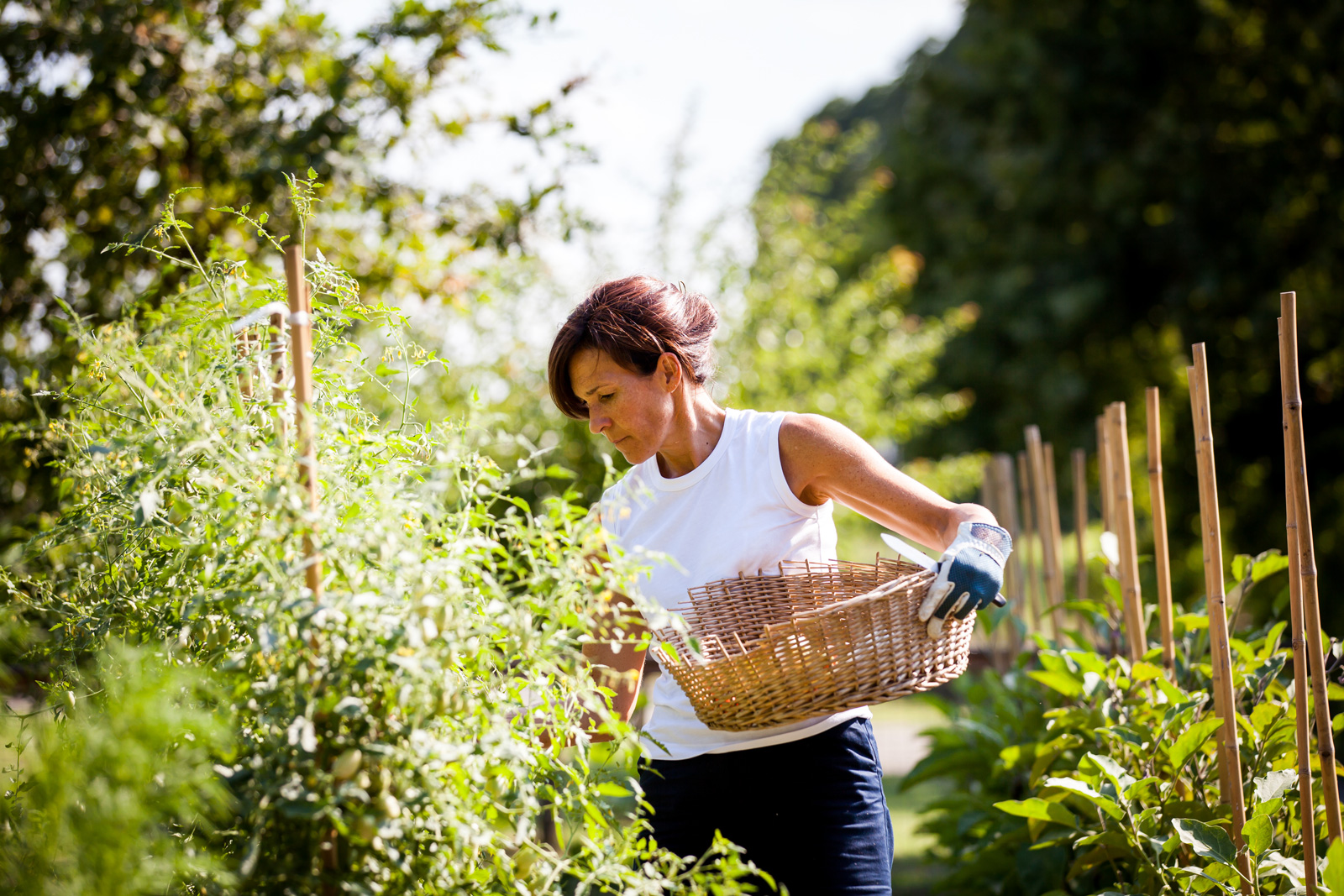 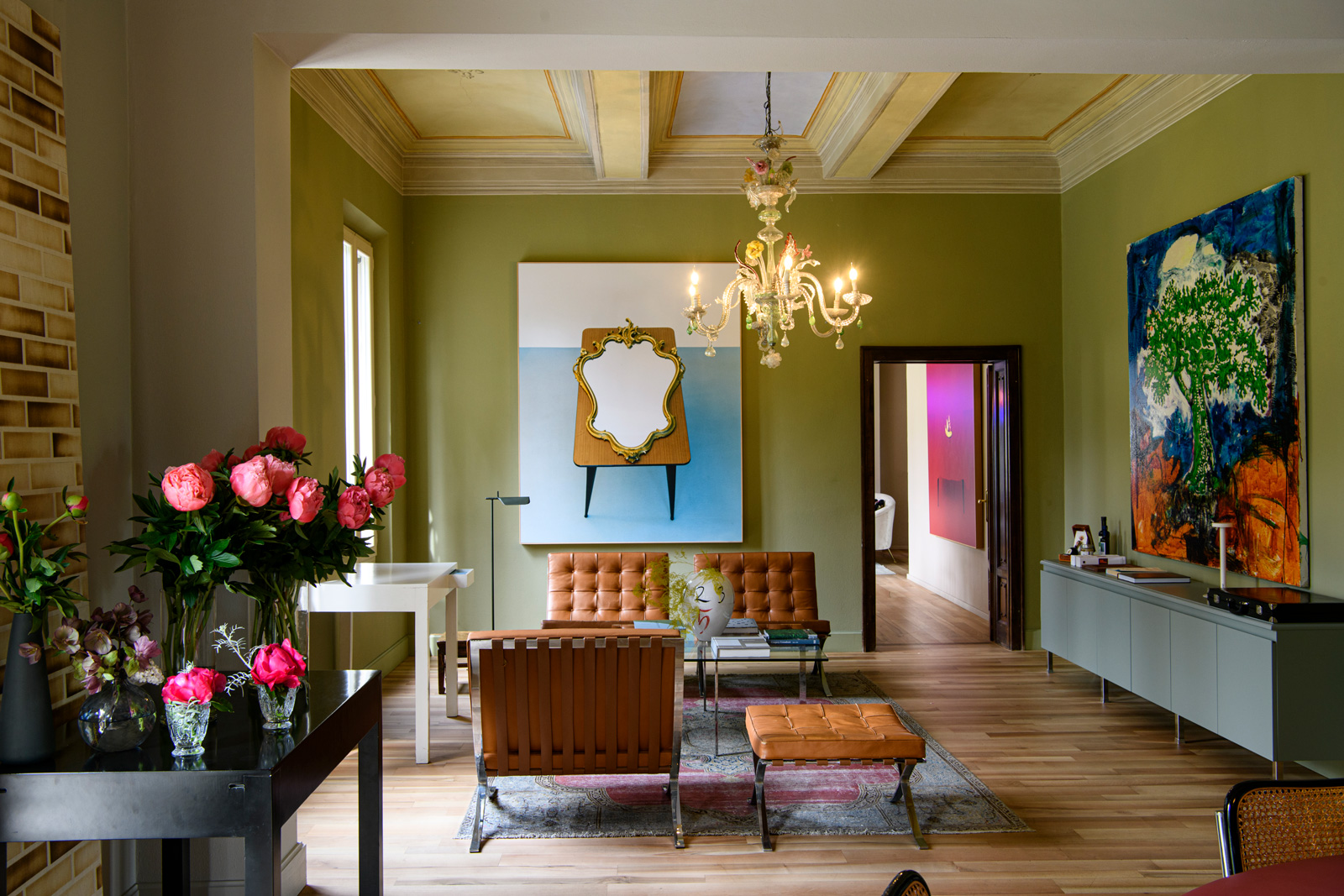 The lady of the house in the herb garden. In the reception room, chairs by Mies van der Rohe stand
between works of art by Carlo Benvenuto and Mario Schifano. Photos: Marco Poderi, Stefano Scatà

That Massimo Bottura has artistic ambitions is easy to see in his cult dishes, such as the dessert “Oops, mi è caduta la crostata al limone” (“Oops, I dropped the lemon tart”): Splashes of squeaky yellow cream stretch across a white porcelain plate that must have been broken and more or less skillfully glued together; in the center of the plate, the fragments of a cake layer can be made out; on the side, a row of colorful dots has somehow survived the misfortune unscathed. Pop art on a plate, so to speak. In addition, Osteria Francescana features works of art that many a museum would love to have: a painting of laughing red daisies by Takashi Murakami, a life-size figure by Duane Hanson, several works by Josef Beuys and “Tourists,” three stuffed pigeons on a perch by Maurizio Cattelan. How does the chef get into art? Massimo Bottura likes to claim that Belle Arti and Bel Canto were part of his upbringing. That may be – he is Italian, after all. But the decisive push came from his wife: “She introduced me to contemporary art. I discovered things I couldn’t see before. Lara made the invisible visible, and together we started buying artworks.” 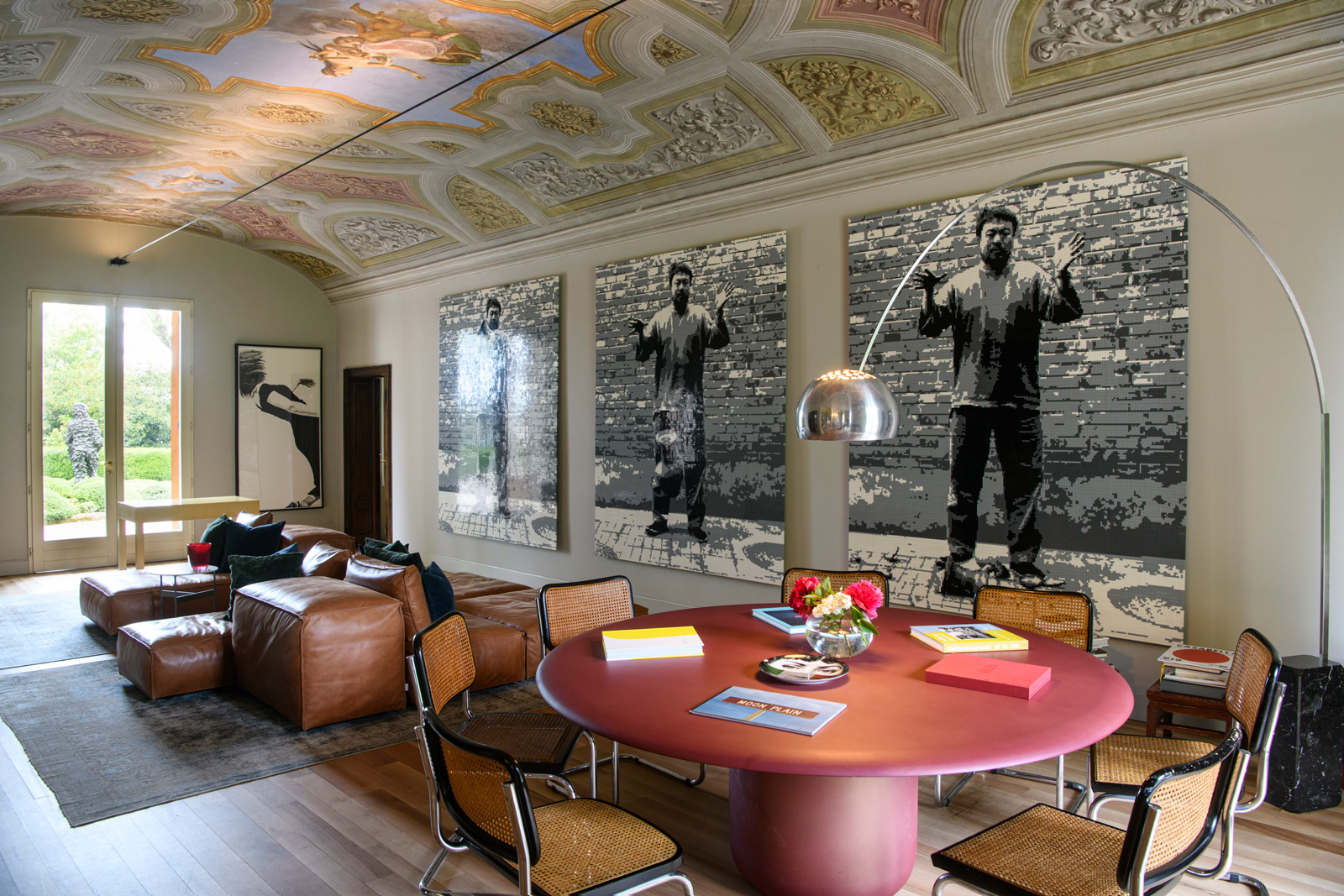 Lara Gilmore searched and found. She selected the works that would move from her private home and her husband’s restaurant to the hotel. She drew up detailed plans for the placement of the artwork, the antique Murano chandeliers, the casual vintage furniture by Eileen Gray, Ludwig Mies van der Rohe, Eero Saarinen and the Castiglioni brothers. She decided whether to decorate the walls of the twelve differently styled guest rooms with a flamingo wallpaper by Gucci, a drawing by Robert Longo or a photograph by Wolfgang Tillmans. “I like it when art almost surreptitiously invades the privacy of our guests,” says Lara Gilmore, who has a story for each work, but only tells it upon request, “everything has to seem natural, no one should be awestruck here.” And so, at Casa Maria Luigia, one can spend a wonderfully carefree vacation: Looking forward to the Bottura breakfast in the morning, lazing by the pool during the day, playing a round of tennis at dusk and admiring “The Last Supper” in the evening – provided a chair is free.
casamarialuigia.com, double room from 450 euro

CHANDIGARH – DOING IT THE BIG WAY