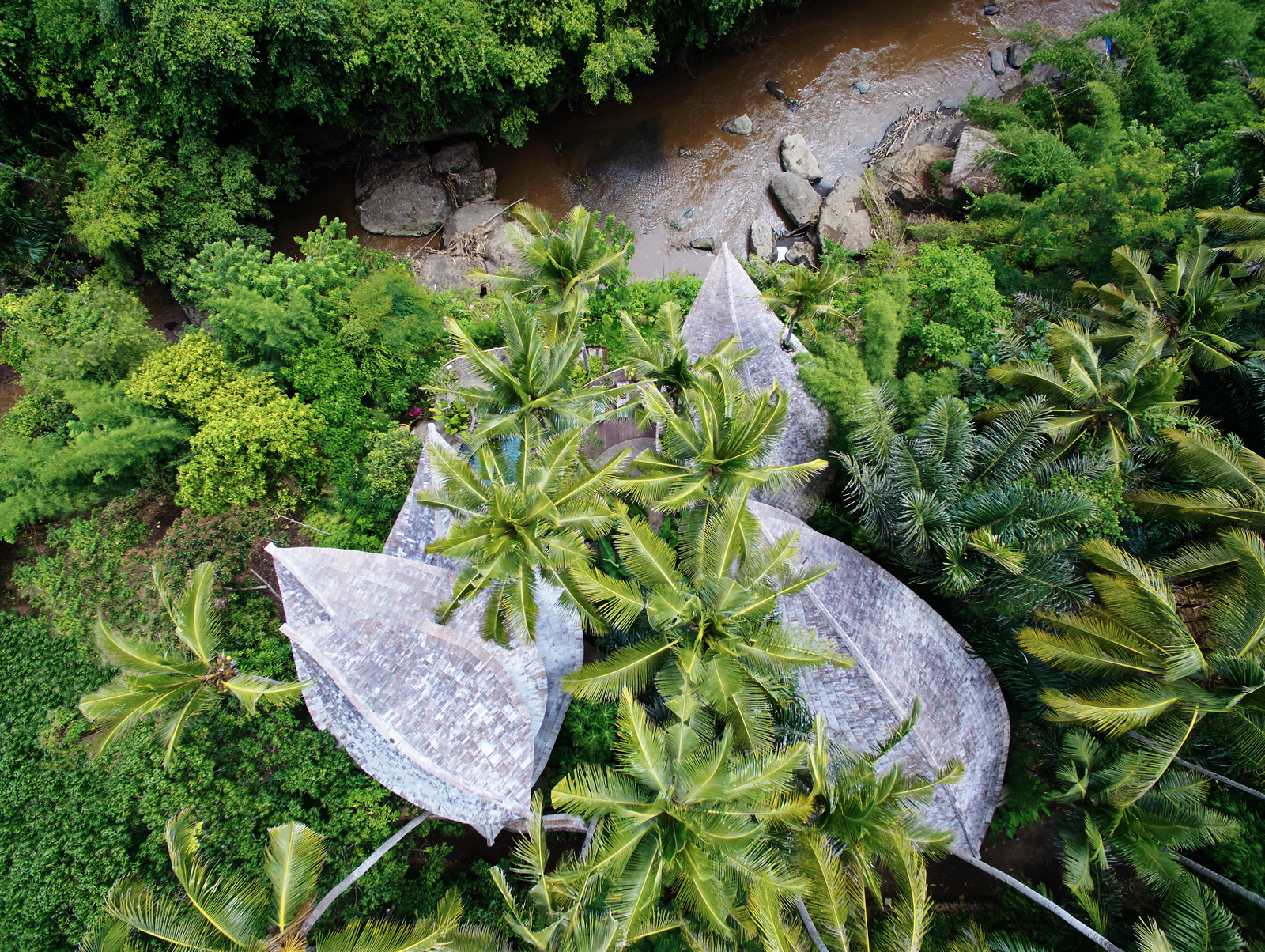 They look like spaceships, but they are all nature. With her bamboo houses, Elora Hardy shows how ecological living can be: beautiful and very comfortable. 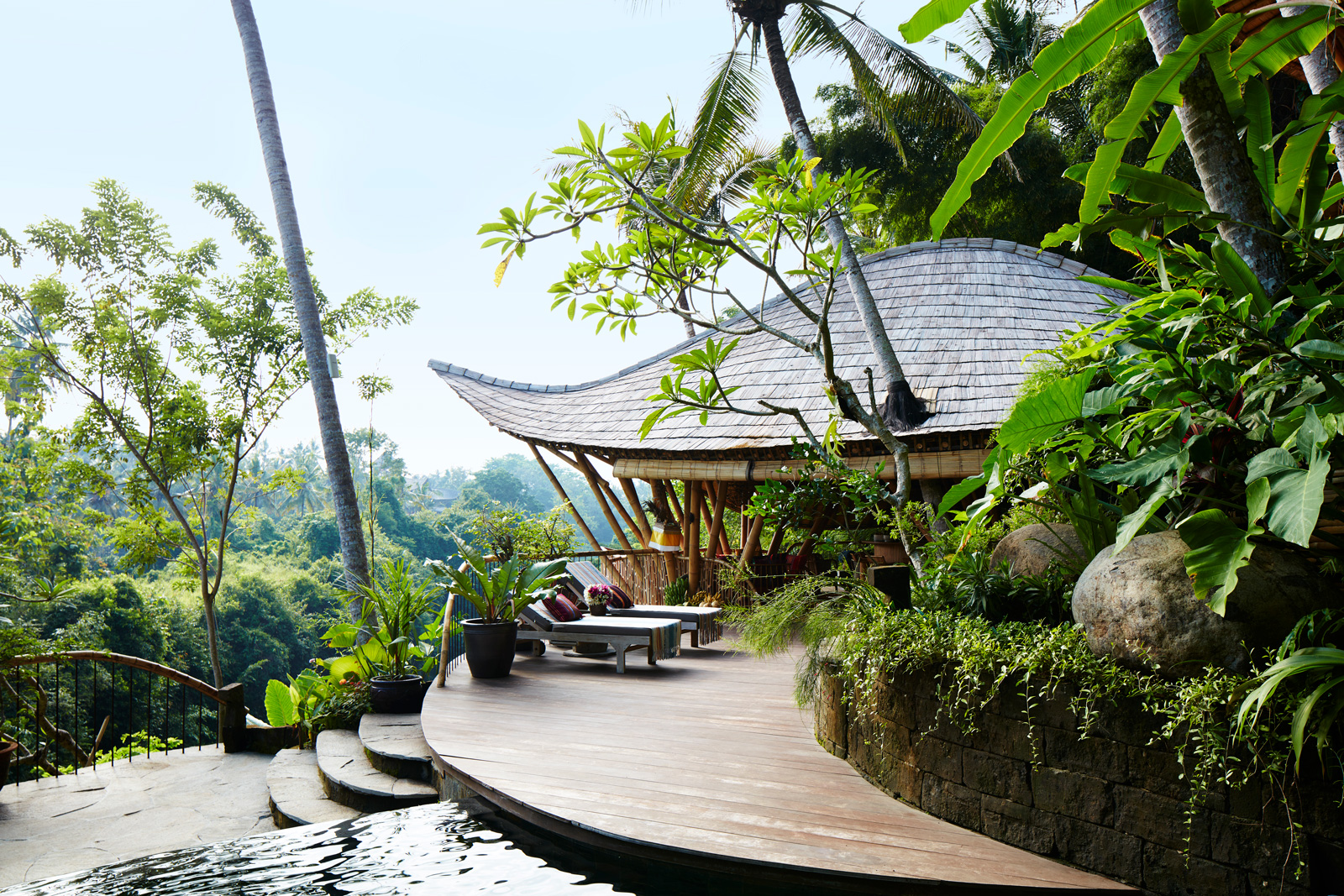 The Ananda House stands like a bamboo blossom in a palm grove. Photos: Stephen Johnson

At first glance, all you see is lush jungle green: slender coconut palms, banana shrubs, papaya trees and snake fruit bushes swaying in the warm tropical breeze. Then an airy, unreal-looking bamboo structure slips into view. “What a great tree house!” the visitor exclaims, amazed. Elora Hardy loves this moment: “No,” she says, “that’s just the garage. The tree house is over there.” Bali is considered the ultimate vacation paradise, with gorgeous luxury hotels, biblical landscapes and the world’s kindest people. Despite growing tourism, the island has preserved a serene lifestyle and an originality that one looks for in vain on Phuket, Mauritius or Ibiza. Many a vacationer could not separate himself from it and stayed. Gradually, especially in and around Ubud, an international community of artists, creatives and do-gooders emerged, combining their dropout life with ecological ideals and a strong sense of aesthetics. 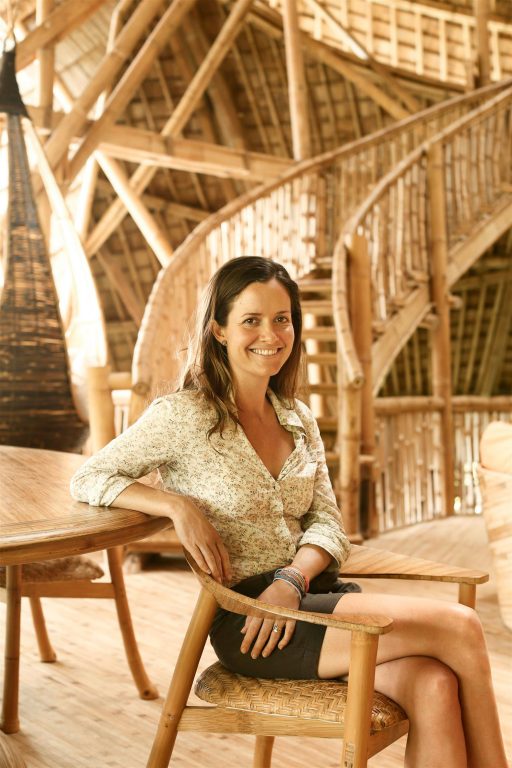 Elora Hardy grew up in Bali. She played in the rice fields as a child and lived in her parents’ spectacular longhouse. Her father, John Hardy, experimented early on with eco-friendly buildings integrated with nature. His manufactory, known for high-quality silver jewelry, was built largely of bamboo, and his showroom was featured in prestigious design magazines around the world. In 2008, he and his wife Cynthia opened the Green School – a school whose infrastructure is made entirely of bamboo, brick and mud. “Bali has become an important showcase for the architectural possibilities of bamboo,” the Canadian-born designer believes. “Designer Linda Garland has pioneered her Bamboo Foundation, and her son is an expert in bamboo cultivation and processing techniques. And with the Big Tree Farm, Bali has the world’s largest industrial building constructed of bamboo. It is a chocolate factory”.

Right next to the Green School, the Green Village is growing out of the lush green jungle soil. A “village” with 18 villas so far, which look like pirate ships or tree houses with their platforms floating above the ground and curved roofs. They are built largely of bamboo. “Bamboo is by definition environmentally friendly, you don’t have to replant it, it grows all by itself,” says Elora Hardy. She and her company Ibuku, founded in 2010, are behind the Green Village. Its most spectacular structure to date is the 750-square-meter Sharma Springs – that villa of which you first discover only the garage.

“When I was designing it, I thought of a lotus flower opening up,” Elora Hardy says. The flower stands perilously close to the precipice, high above the steeply sloping valley of the Ayung River. Sharma Springs was built for Canadian Sumat Sharma and his family in 18 months of construction. The multi-story building is entered through a tunnel-shaped bridge that leads directly to the living room on the third floor – a spacious room open on all sides and spread across several levels, its softly shimmering bamboo floor reverberating with every step. Bamboo everywhere you look: Dining table, sofas, armchairs, consoles – all the furnishings were created in Bali, at the design tables of the 25-member Ibuku team. 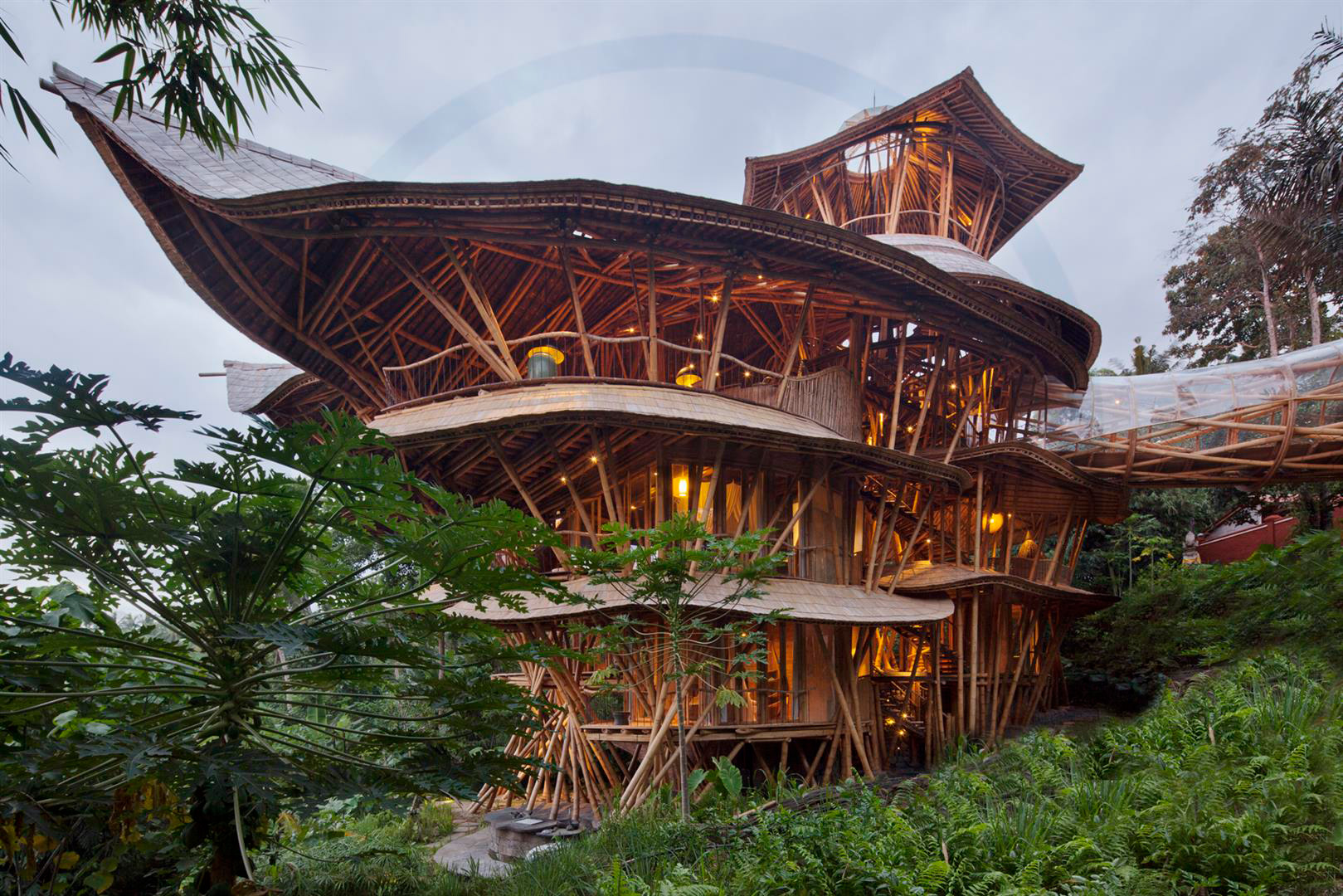 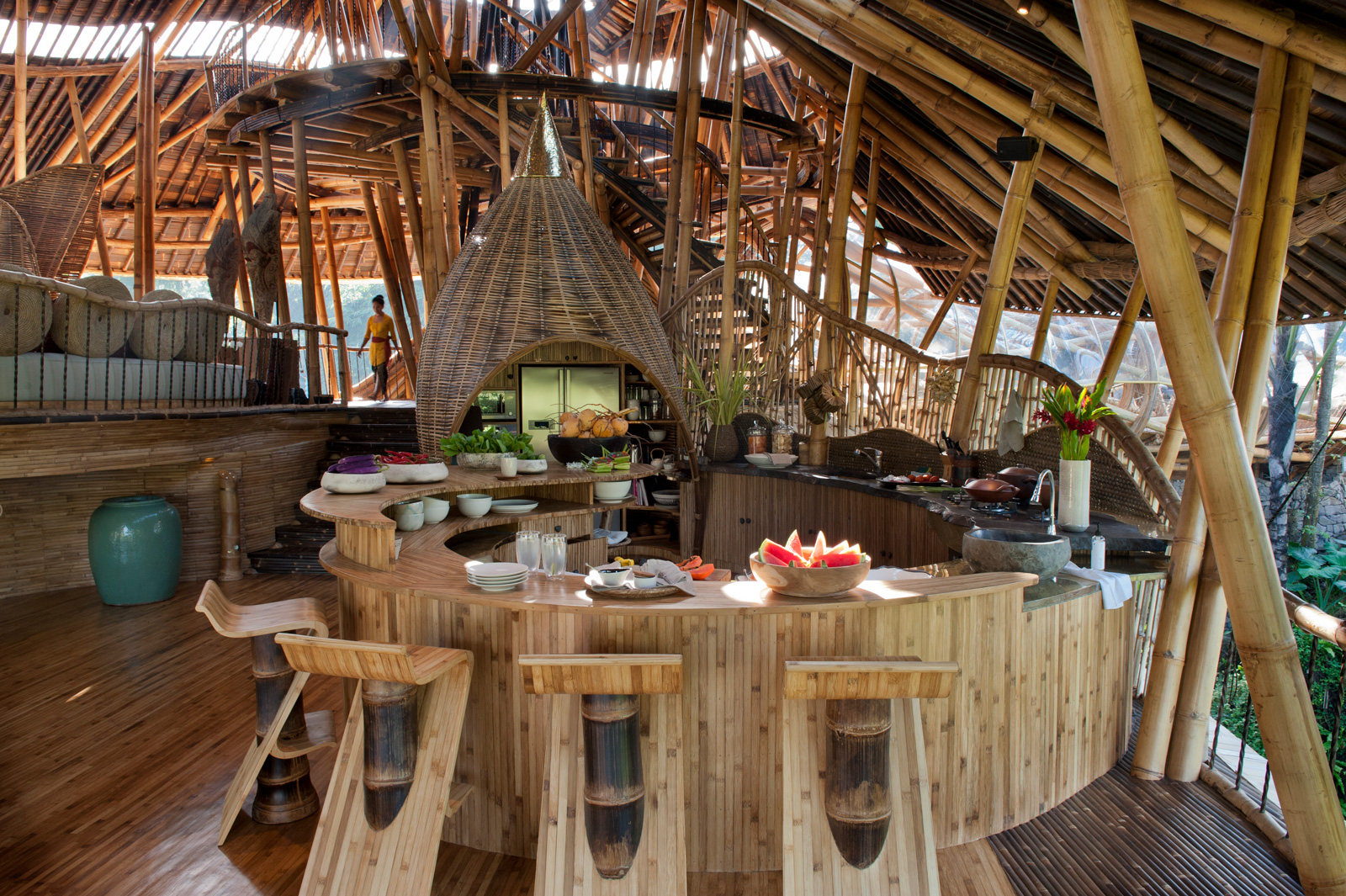 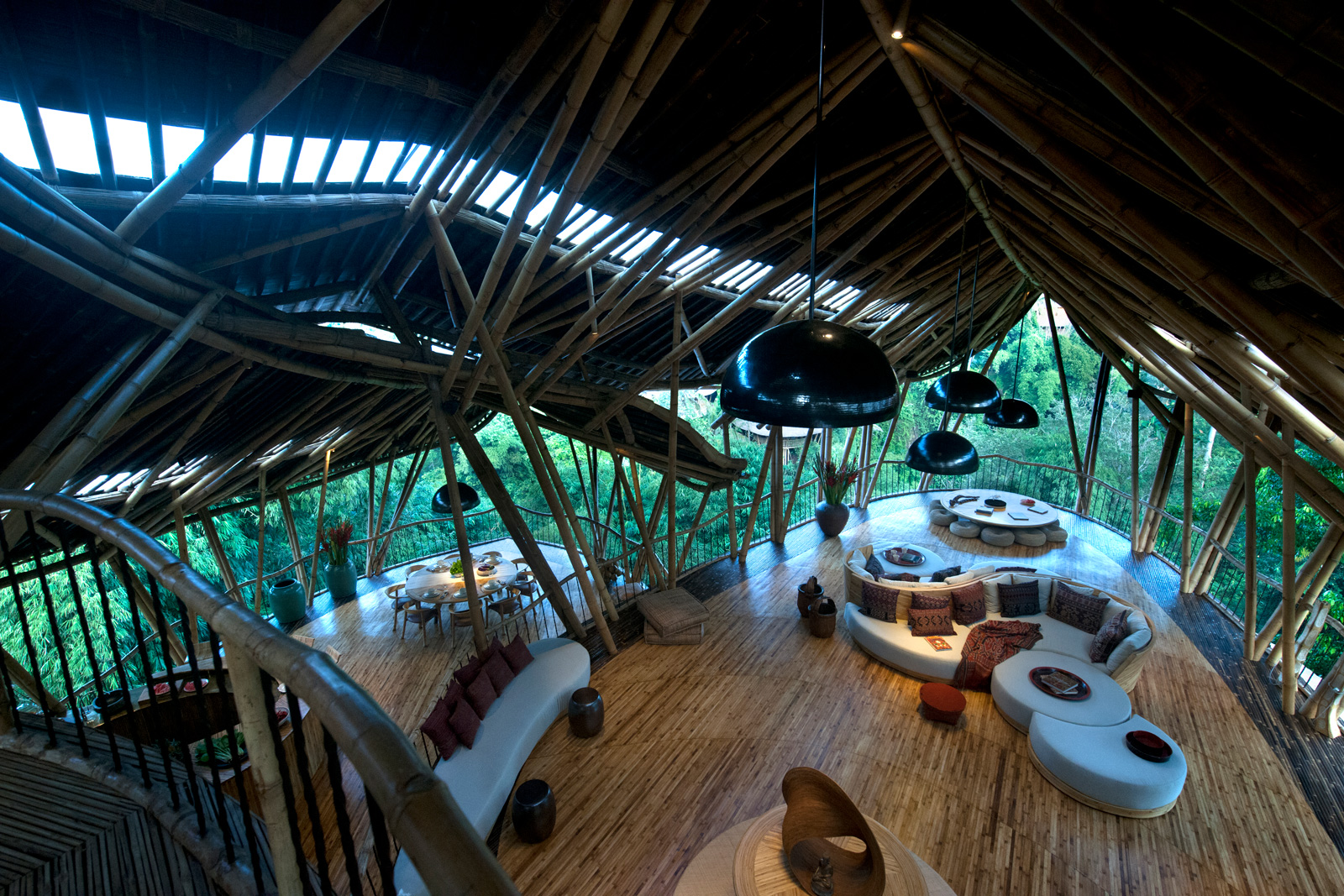 Top: Sharma Springs with spectacular exterior views, photo by Tim Street-Porter. Below: Inside, the house is spacious and comfortable, photos: Rio Helmi

The natural elegance of their designs has long been known beyond Bali’s borders: Ibuku projects can also be seen in Hong Kong, Singapore and the Maldives. Elora Hardy never fails to point out the artistry of her architects and builders, who work using miniature bamboo models. She raves about the beauty of her building material, which grows all over Indonesia and can be had for next to nothing, and tells of the adventurous nighttime transports when 18-meter-long bamboo canes were hauled in far-too-short trucks over the winding and not-quite-wide island roads to the still largely undeveloped Ayung River valley. “I’m relieved every time when everything goes smoothly,” says the 40-year-old, who after studying art in the U.S. worked for a few years as a print designer for Donna Karan before her desire for an ecologically minded job and a yearning for Bali brought her back to the island in 2008.

At that time, her parents had just opened the Green School, and had already thought of an adjacent residential area for parents, friends and friends of friends. Elora took up the idea and got to work. Now, among other things, the 18-meter-high bamboo structure stands there in the bush. A staircase winds around the central tower structure from the Living to a terrace above, built specifically to watch the dramatic sunsets over the river valley, glowing in all shades of red. The same staircase leads to the lower two floors with four bedrooms and bathrooms, game room and library. Cooking is done on the first floor, and space was also found for a small spa. Sharma Springs is the kind of dream home anyone would love to have, even if only for a vacation. “It can be done,” laughs Elora Hardy, “the Sharmas are only here once in a while. Most months of the year they rent out their house.” 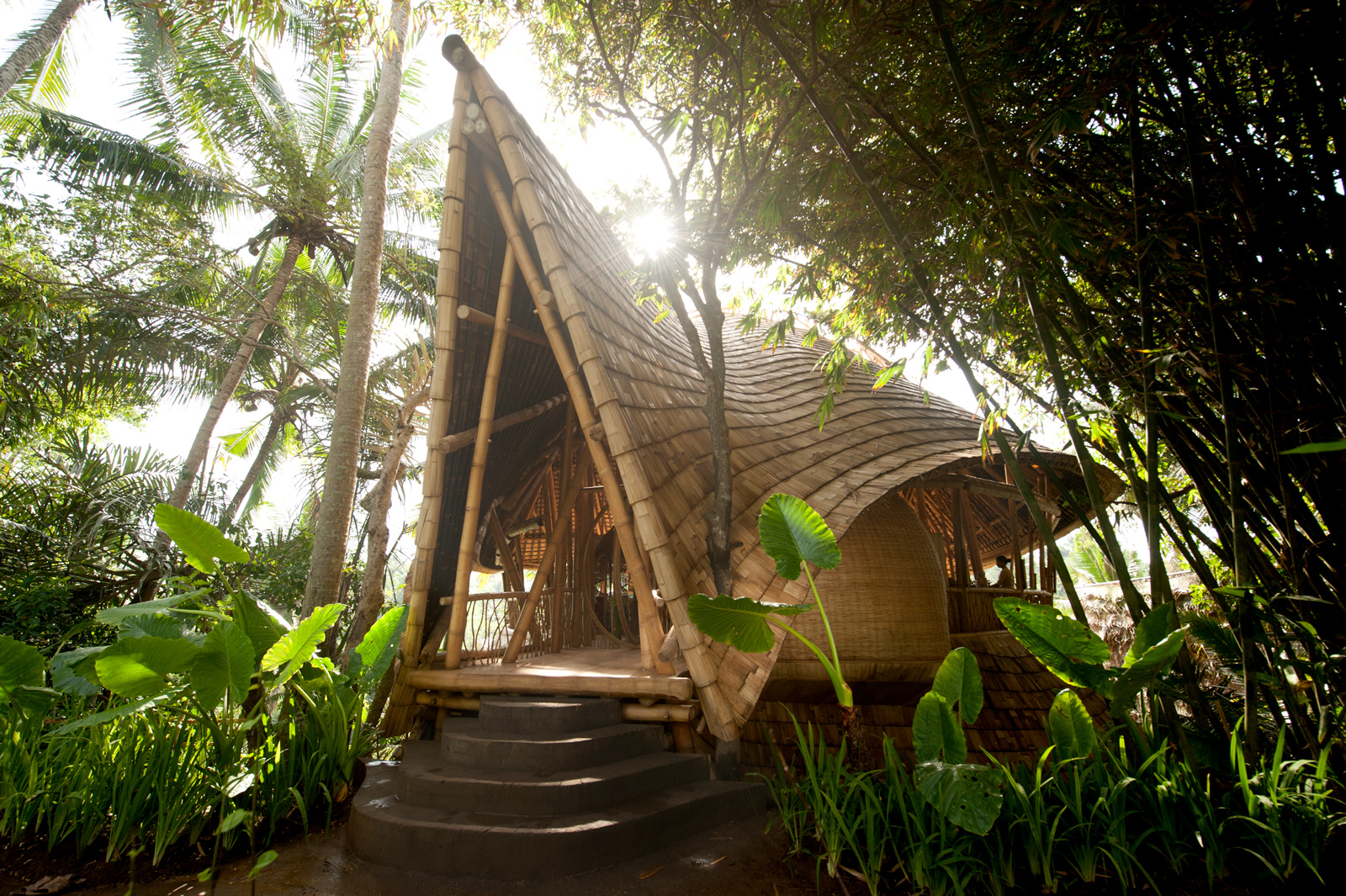 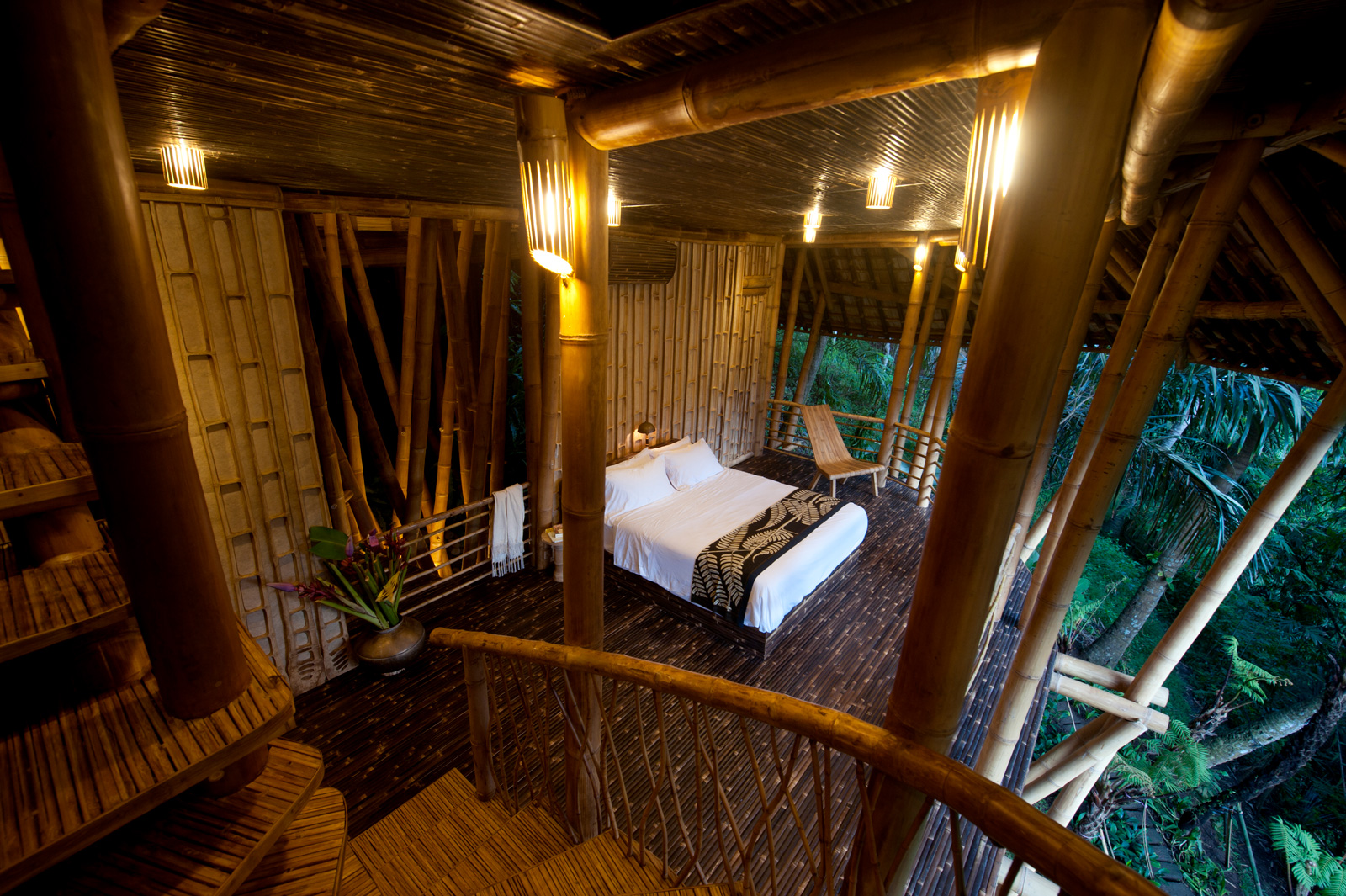 There are other options for temporary Green Village residents: Sunrise House, for example, built for a New Zealander living in Bali. “She lives down by the beach, and wanted a kind of summer retreat in the mountains,” Elora explains, “We built her a cozy tree house, very close to nature, very casual, with few walls and no air conditioning. She is rarely up here, Sunrise House is mostly given to vacationers.” The building is entered from above, via a fourth-floor room that unfolds around a central bamboo tower. The tower serves as the skeleton of the house, with supporting bamboo canes crisscrossing at its center. Under the curved roof is a small office, there is a cozy TV room in an oversized bamboo basket and several bedrooms with bathrooms. For the covers in the kitchen, stonemasons from Java cut mighty river stones into thick slices with dark borders like loaves of bread, while the metal water basins were shaped by Balinese blacksmiths.

Or the elegant Ananda House, consisting of three multi-story building wings, which was placed in the middle of a palm grove for actor David Hornblow. Or the smaller Aura, whose approximately 100 square meters float in the treetops like a bird’s nest made of the brightest bamboo. Or the three-story Eclipse House, built primarily with Black Petung bamboo and surrounded by black sugar palms. It stands suspended over a series of terraces that cascade down to a crescent-shaped infinity pool. Or the Leaf House, shaped like a leaf … You’re spoiled for choice. Even for people who want to experience Ibuku style without sacrificing the comforts of a hotel, there is an option: John and Cynthia Hardy’s eco-resort Bambu Indah with 20 different bamboo houses, two restaurants, spa and natural swimming pools embedded in the jungle. 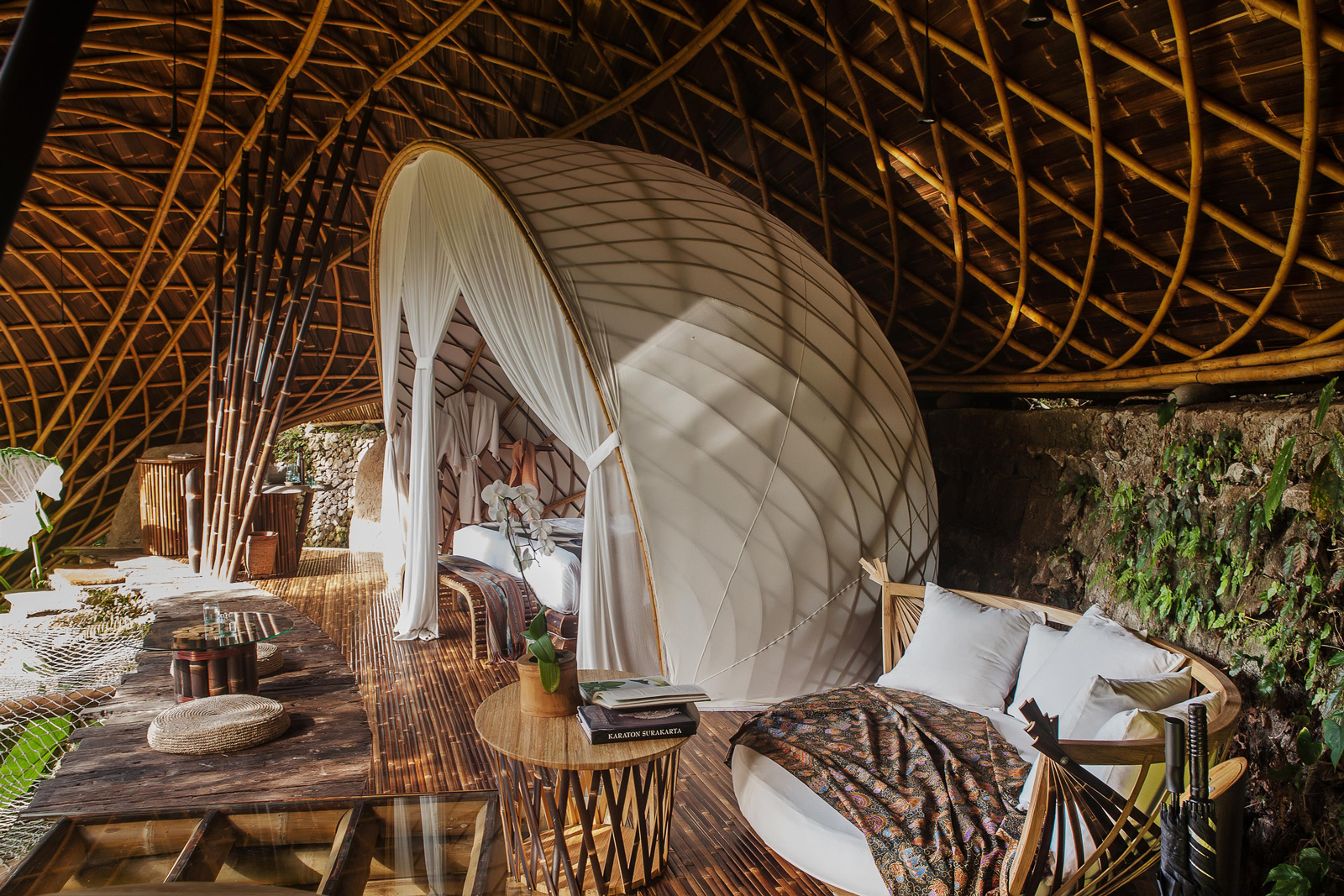 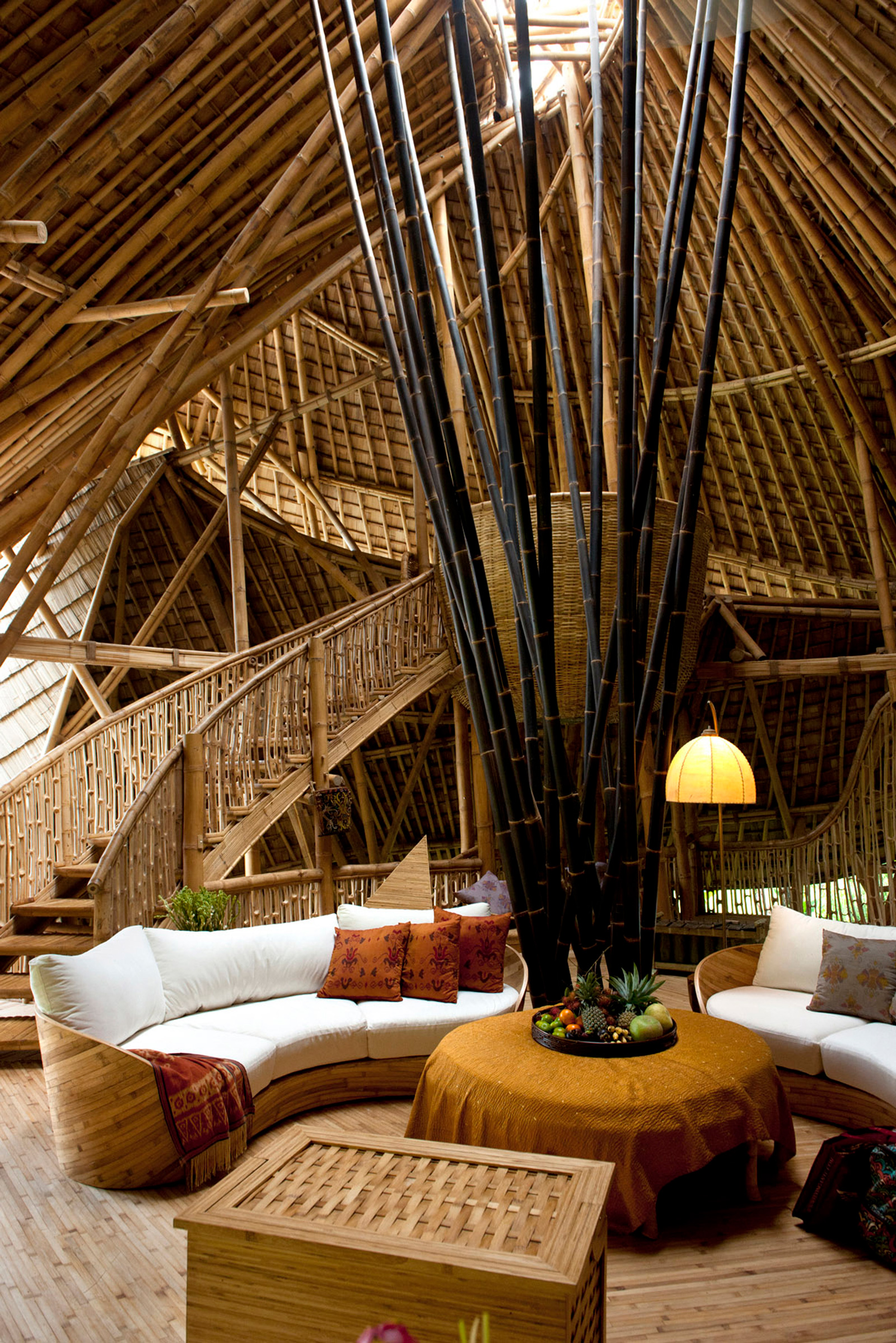 At first glance, all the Ibuku houses seem like alternative hostels for aging hippies, but in fact they are luxury villas with every comfort: Internet, satellite TVs, libraries, perfectly equipped kitchens, beautiful large bathrooms – nothing is missing. Slowly, locals are realizing the potential of the cheap and versatile bamboo canes. They observe attentively how foreigners deal with their supposed poor people’s building material and what marvels they make out of it. The value of these things does not escape them either – an Ibuku villa can easily cost a few million US dollars. Already, design stores in Ubud, Seminyak and Sanur are selling magical bamboo home accessories, replacing clunky traditional bamboo sofas with intricately designed furniture. “It is only a matter of time before Balinese also build houses for themselves out of bamboo. And not just for cost reasons but because they see how beautiful they are,” Elora Hardy believes. Then the Hardys and all other Balinese bamboo activists would have achieved their goal.
ibuku.com, management, visits & rentals: greenvillagebali.com