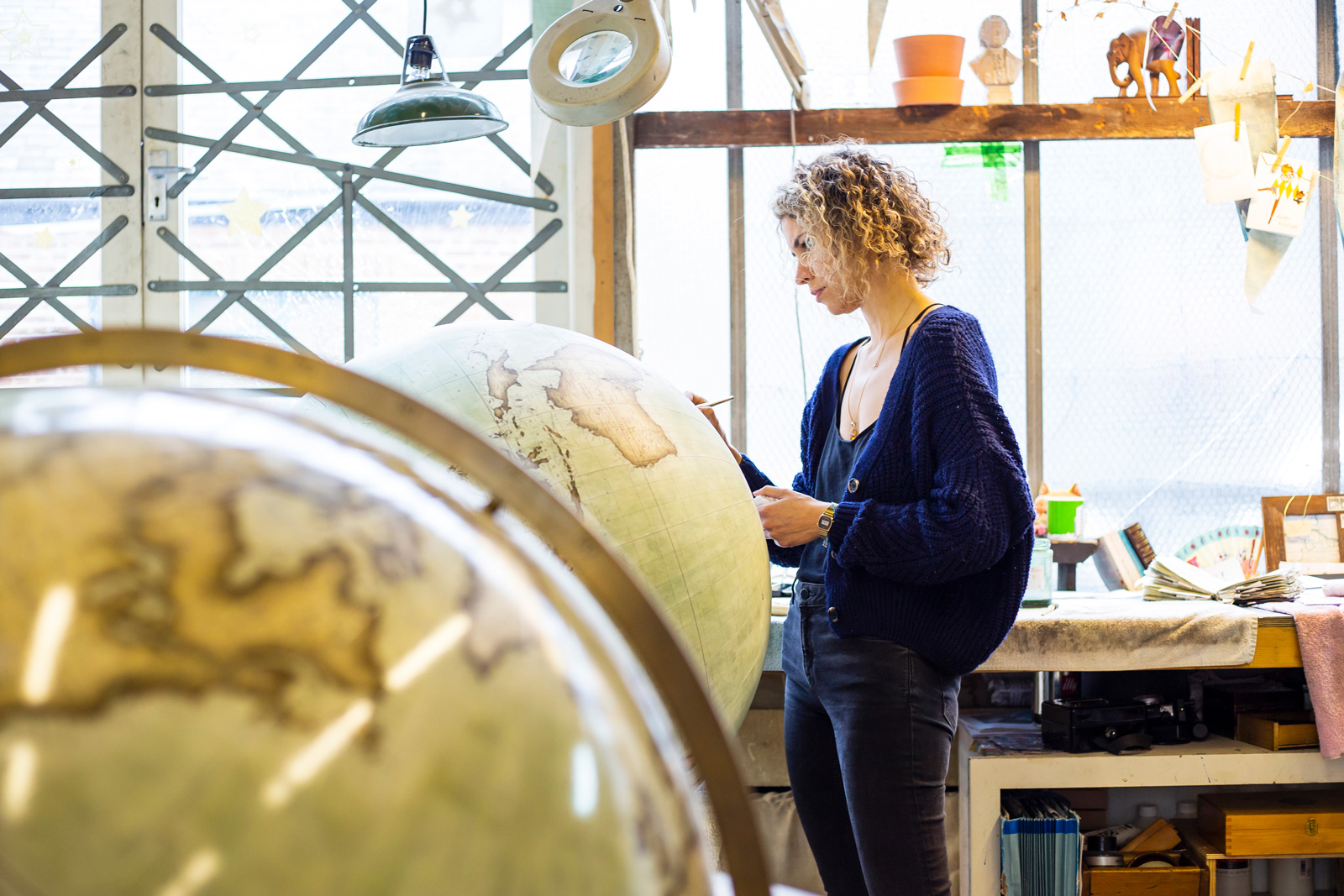 Like many good ideas, this one originated in a London pub. After searching unsuccessfully for a perfect globe for his father’s 80th birthday, Peter Bellerby decided to make one himself. 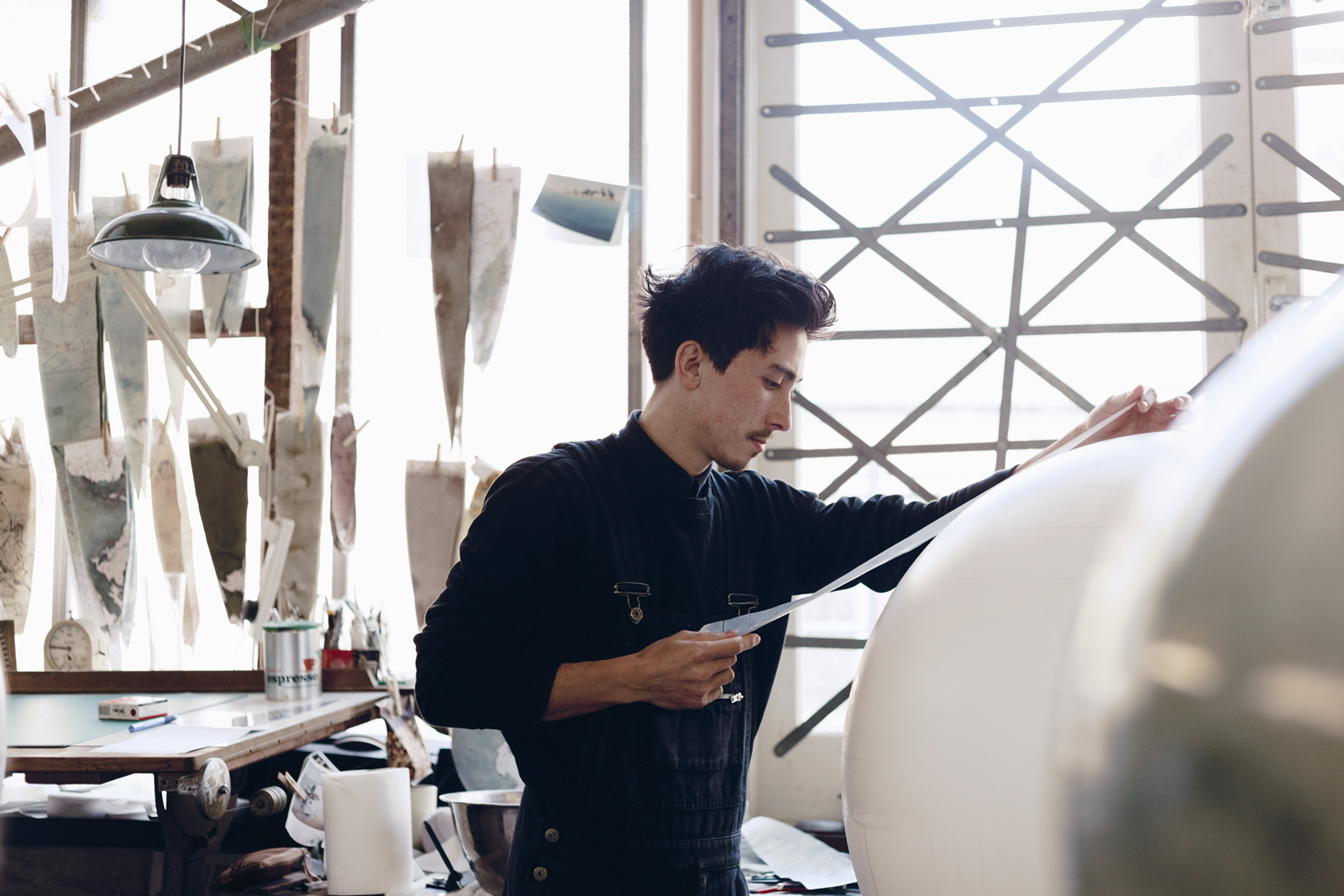 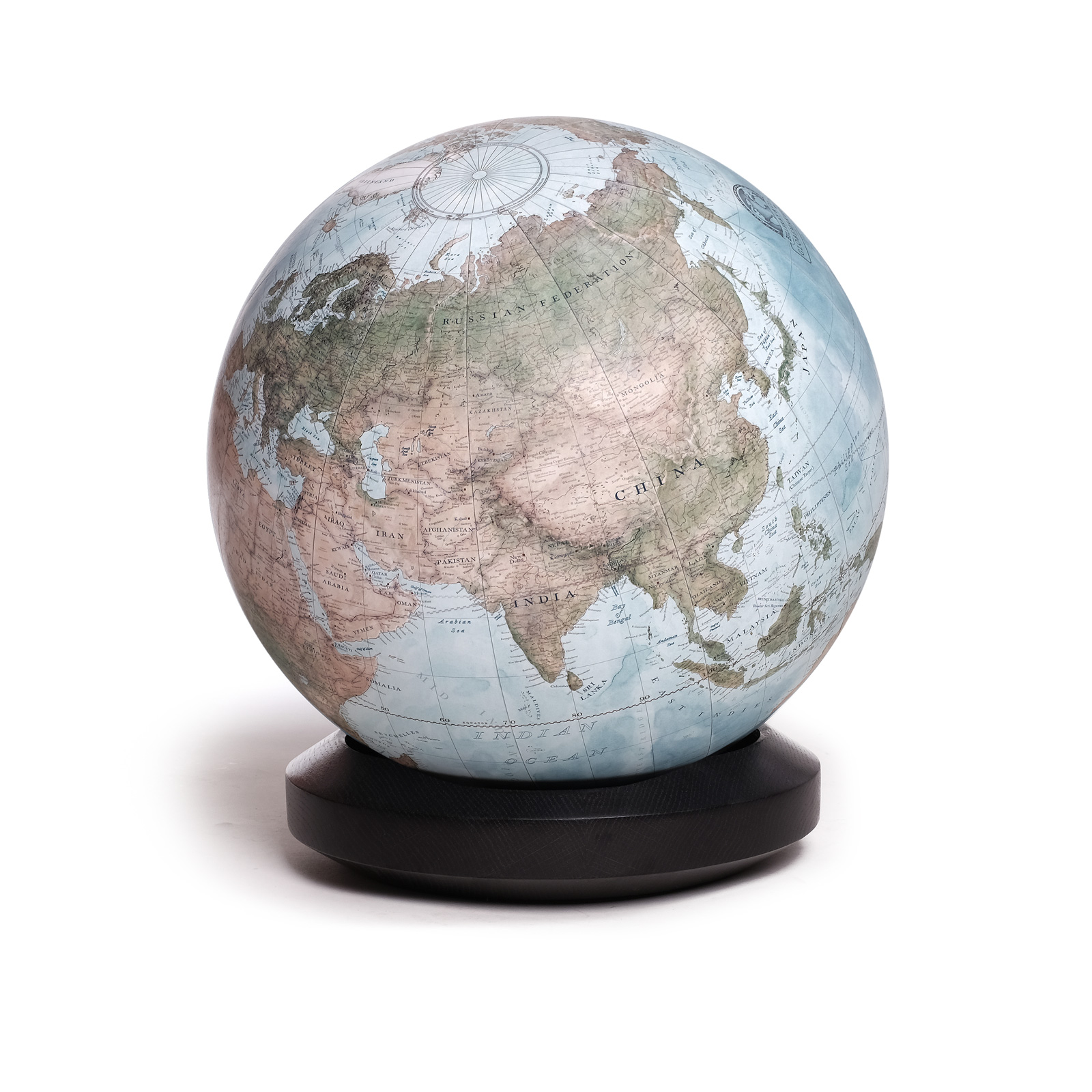 Stoke Newington in London’s north is one of the trendy neighborhoods of the British capital. Local hipsters order their pint in the pub on the corner of Bouverie Road, and the brick cottages in Bouverie Mews are popular residential addresses. “Knock hard” is written on a white sheet of paper on the wooden door of a former warehouse at number 7. In the light-filled workshop behind it, hand-colored maps dry in curiously cut sheets on clotheslines; half-finished globes rest on pedestals padded with towels. Sometimes you can make out the contours of Africa, sometimes the archipelago of the Philippines, or a world full of mythical creatures that turn out to be the representation of our heavenly bodies illustrated in exquisite detail.

Bellerby & Co Globemakers is the only manufactory in the world that produces individually designed globes, piece by piece by hand. Every single globe is unique; at the customer’s request, birthplaces, cultural sites or personal travel routes, no matter how tiny, are highlighted with a cartographic precision that hardly existed before. “The errors on common atlases and school globes are massive,” says Peter Bellerby, who made his first globe as a gift for his father because he couldn’t find anything to buy that he liked. The project turned out to be much more time-consuming and complicated than expected: “There were no reliable templates, I compared and researched, things got completely out of hand,” he says. It took 18 months of trial and error to complete the globe. In the same time a new business concept was created. Peter Bellerby founded his company in 2008, since then thousands of globes have left the studio. 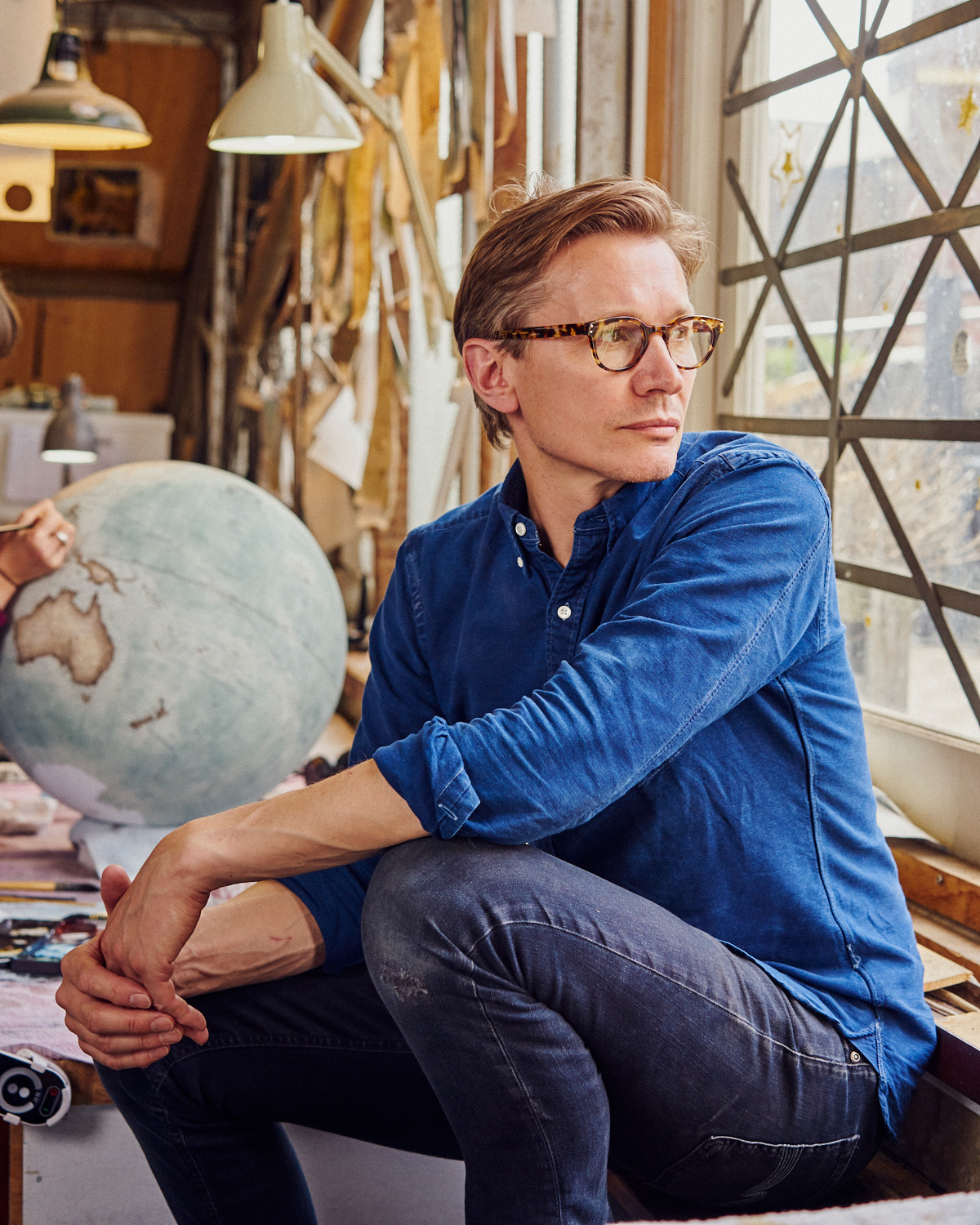 “I don’t like being told what to do, I prefer to go my own way. That trait also brought me to globes.” 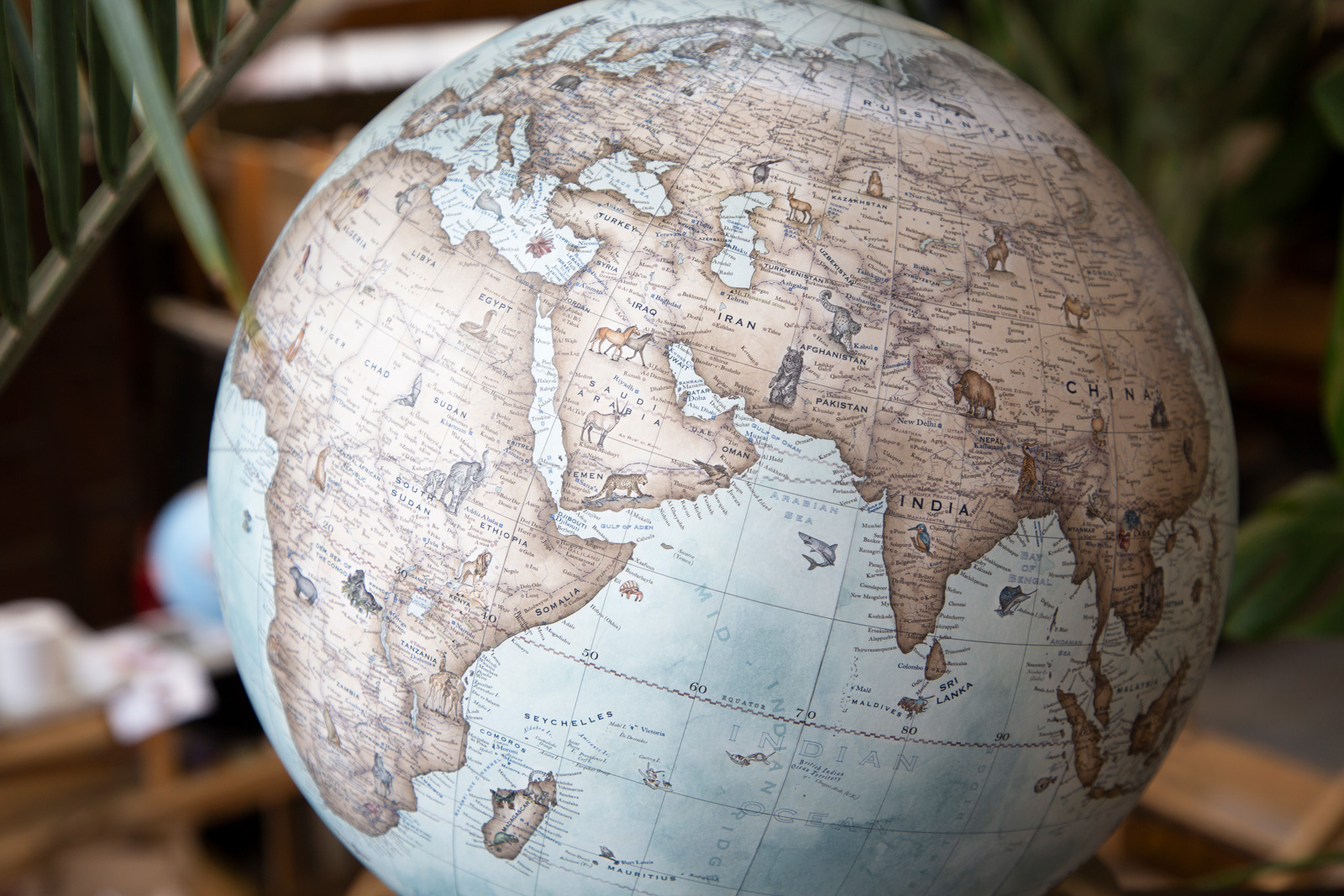 He is happy to accommodate special requests: A member of the British House of Lords ordered a globe featuring the coat of arms of the parliamentary upper house. Another customer planning a trip to Antarctica wanted the travel route plotted on the map. Some want all the places in Arabic characters, others up to 200 additional hand-painted illustrations. One Russian ordered the largest model yet: a sphere 127 centimeters in diameter. “He had to wait, because the most we can manage is one of these a year,” says Peter Bellerby, “it takes months to make this globe, and it’s so difficult that you have to be in the right mood for it.”

The work requires a combination of intricate calculations and physical engineering. To fit on the sphere, a map must be divided into precise paper gores. The sphere itself must be perfect, the slightest deviation would result in gaps between the strips of the map. Gluing the paper to the sphere requires a master hand: the paper is wet and carefully stretched across the spheres making sure to not tear, overlap, bubble, crease or turn the paper into papier-mâché. 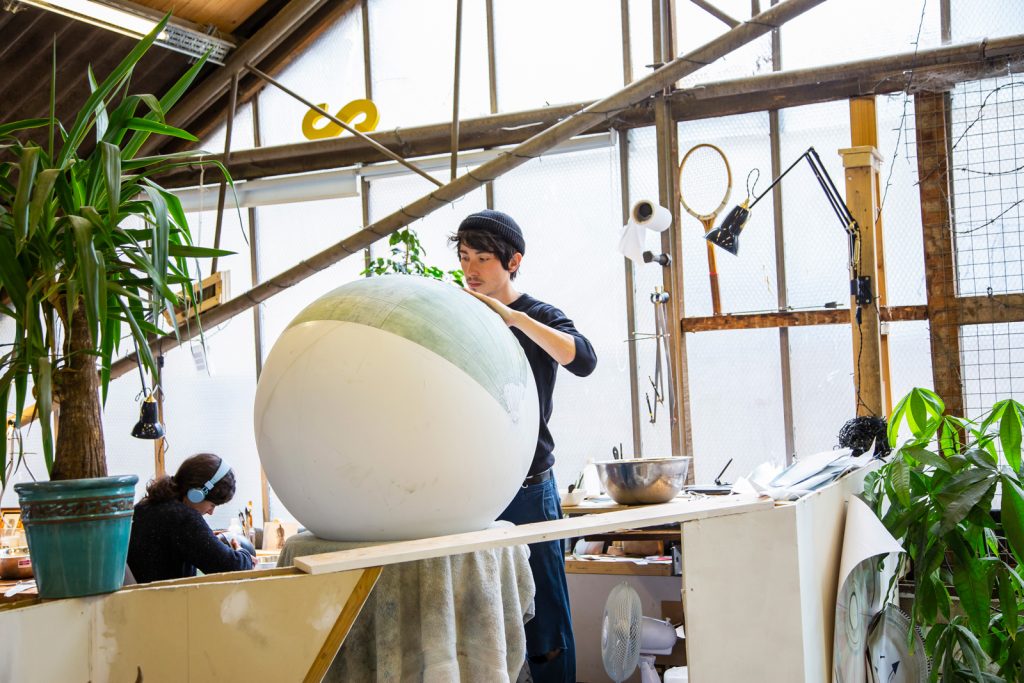 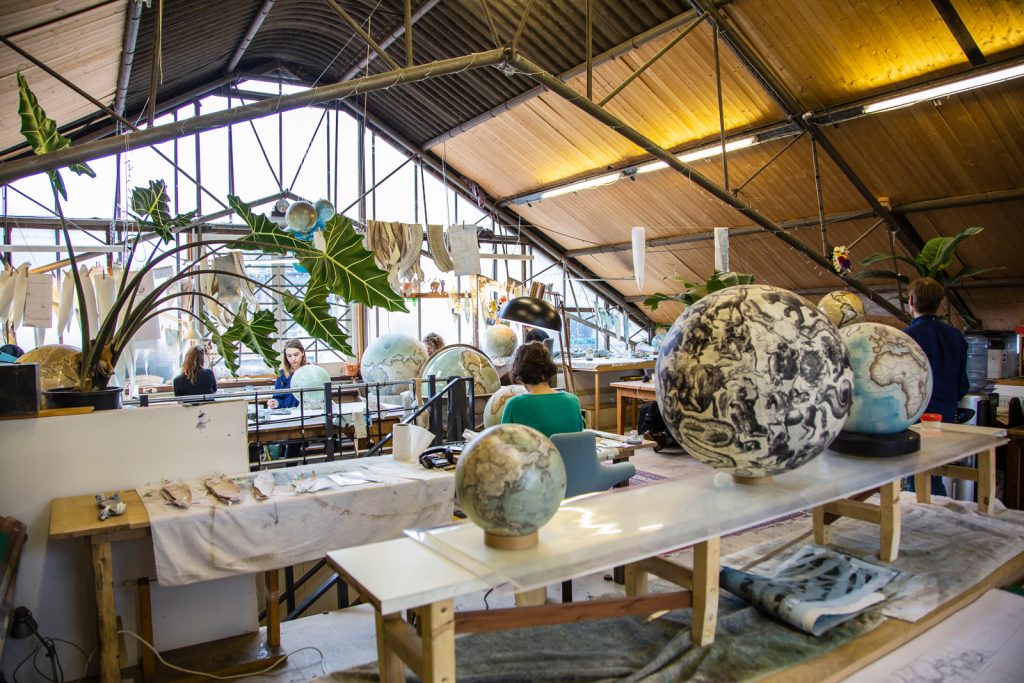 Peter Bellerby came to surveying the world in a roundabout way. In his previous life, he worked in television, helped a friend to open a music venue with a bowling alley, bought, refurbished and sold houses. “I don’t like being told what to do,” he says, “I prefer to go my own way. That trait also brought me to globes.” He has revived the lost art of globe-making – Bellerby & Co Globemakers is one of the only companies in the world (if not the only) creating modern globes the traditional way.

His most exciting commission at the moment comes from the Louvre in Paris: a copy of the globe of heaven made for Louis XIV in 1681. The globe has a diameter of 387 centimeters, the original weighs about two tons. There still exist the old copper plates, which are perfectly preserved, and the prints. “Part of the work is taking place in Paris, because of course the Louvre doesn’t give out the copper plates,” explains Peter Bellerby, “we also need to understand some important details in the work of the artist, who is long gone and has left no clues as to how he went about it.” Financing for the unique project is also not quite in the bag yet. So until when the globe will be finished is literally written in the stars, but someday – it is hoped – it will float in the museum’s grand stairwell. Just unveiled is the new Animalia collection, whose globes are adorned with 196 hand drawn and hand painted illustrations of animals in their natural habitats. Size and colouring are variable and customers can have their dog, guinea pig or parrot immortalized. Next up is a series of solid hand-cast bronze globes ranging from 22 to 80 centimeters in diameter for those seeking a contemporary look. 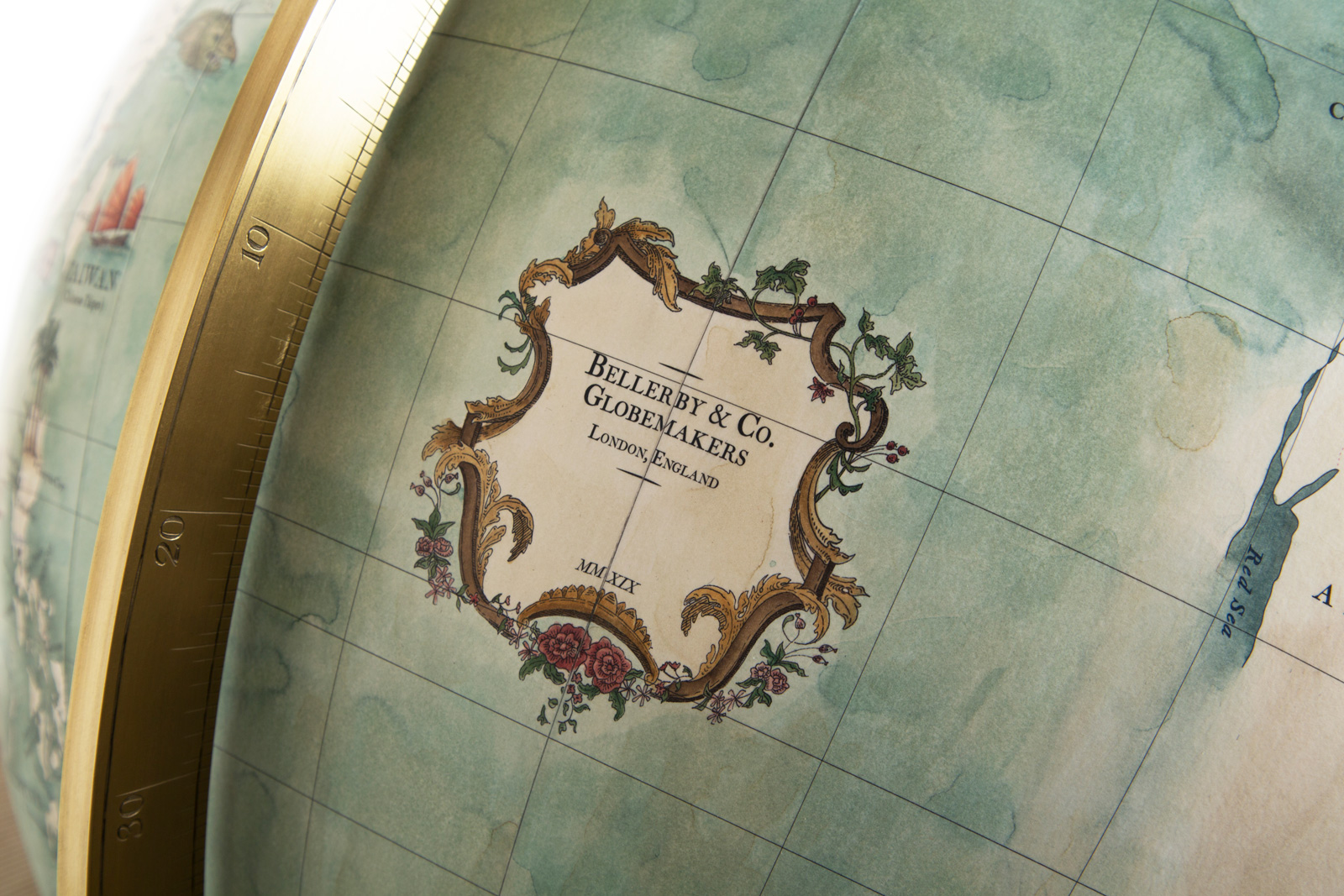 Either way, the globes come at a price. The extra-large Churchill model, which takes between six months and two years to work on, costs from £89,000, with smaller examples starting at £1349. Who’s going to buy that in these days of Google Maps and Navi? “No one who wants to travel with it. A globe is not meant to show the way from A to B,” says Peter Bellerby, “it will inspire you to look up a place in more detail and it’s something handmade and hand painted – one of a kind that you can pass down to future generations.” His clients include students, captains of industry, movie stars. The globes have been featured in Hollywood productions, television shows and music videos. Does the British Royal Familiy has one? “Maybe yes, maybe no,” says Peter Bellerby with a smile. He would love to dedicate a globe to the Queen, featuring Queen Elizabeth Land – an area in Antarctica named after the Queen in 2012 to mark her 60th anniversary on the throne.

After all, Bellerby & Co has just been honored for the second time with the prestigious Queen’s Award for Enterprise, the highest official award for British companies that distinguish themselves through international trade, innovation, sustainable development or the promotion of opportunity. For despite the pandemic, Peter Bellerby was able to expand: six new employees were hired, over 600 globes left the studio in 2020 and traveled to customers in Japan, India, China, Brazil and the USA. The success can only be explained by the beauty and value of the globes. They are a piece of contemporary history, showing the world as it is.