CHANDIGARH – DOING IT THE BIG WAY 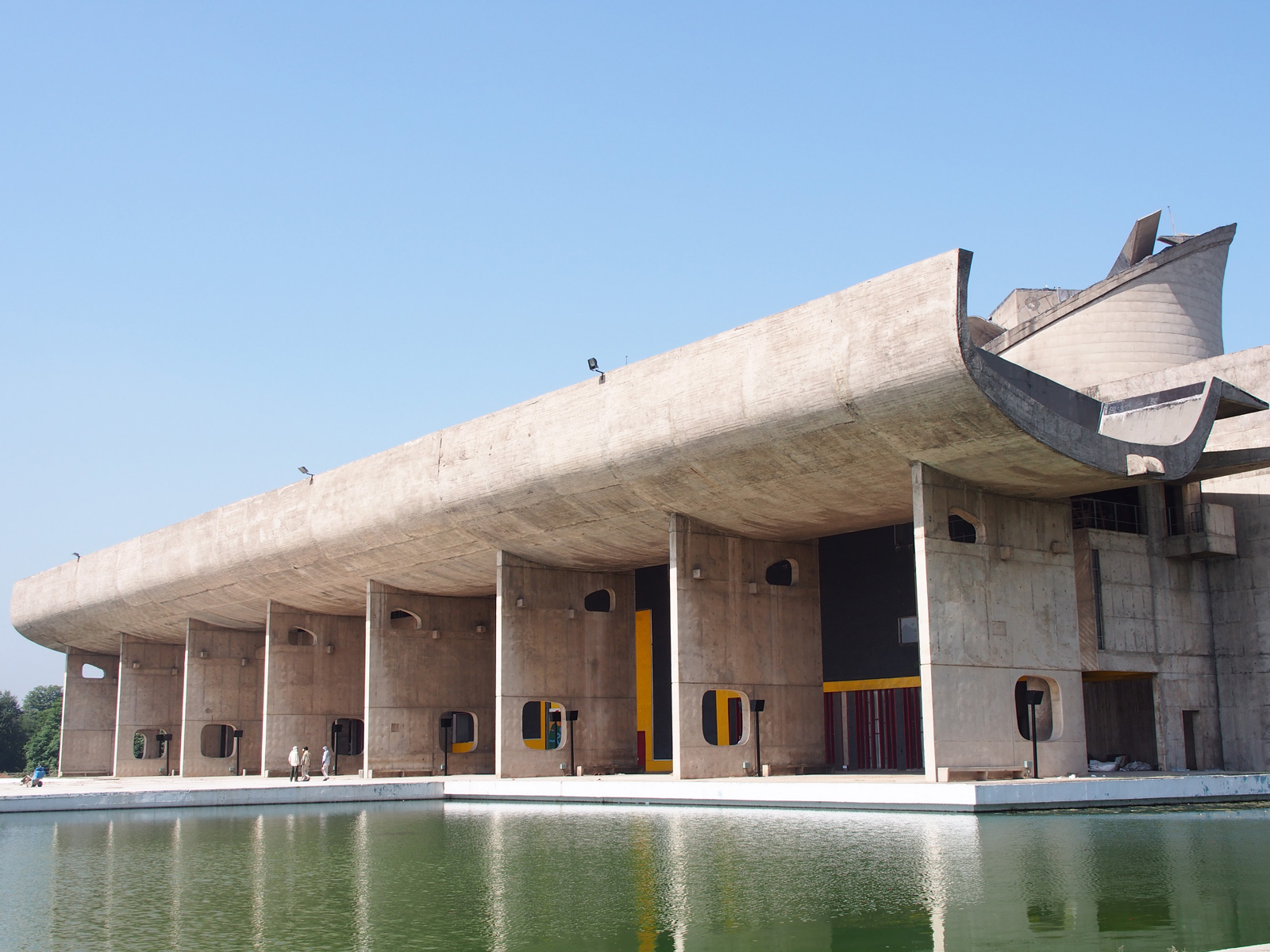 Chandigarh
Doing It the Big Way

70 years ago, Le Corbusier designed India’s city of the future. Chandigarh is loved and praised by its inhabitants, but few know the name of the Swiss architect. 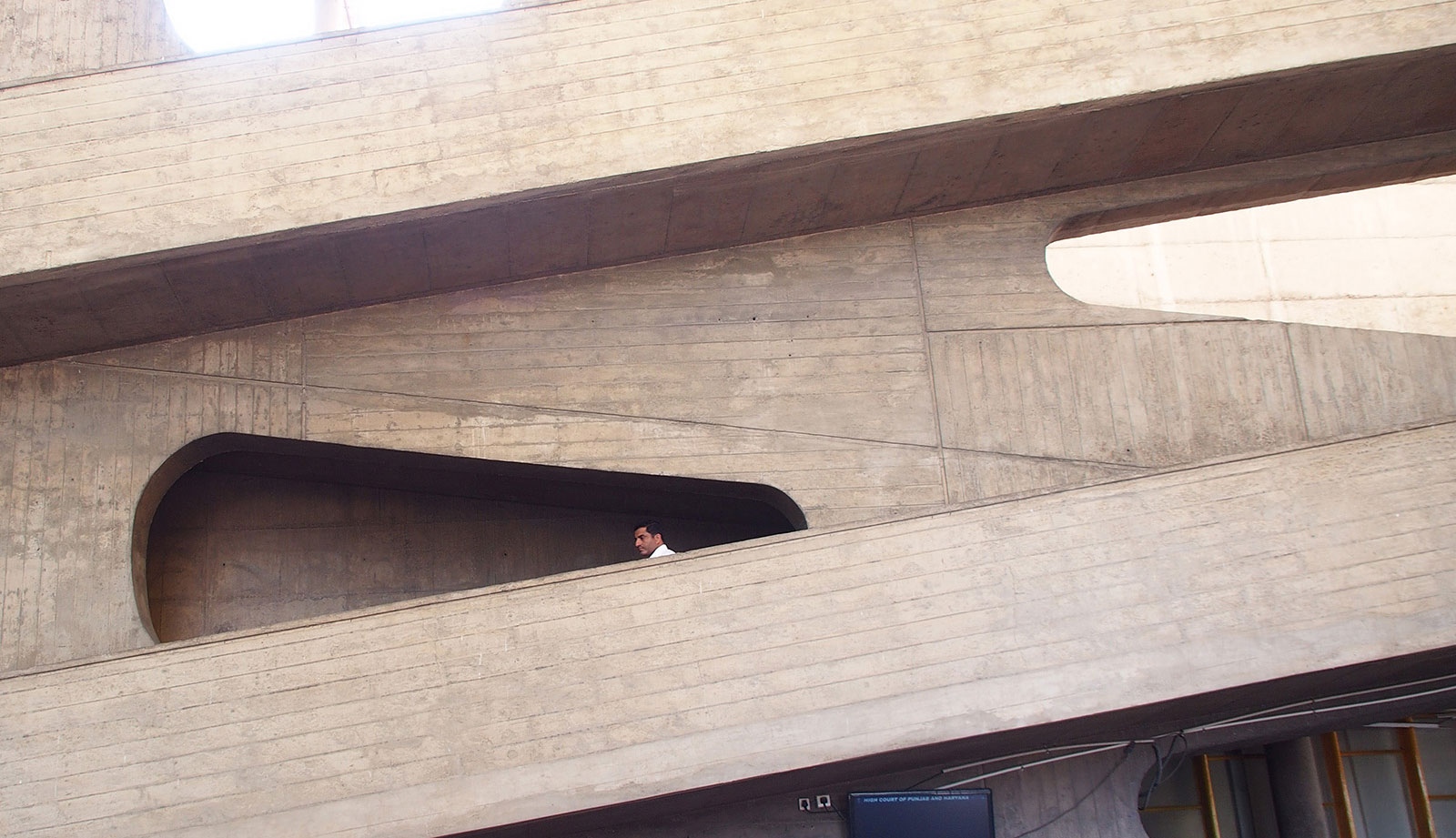 The Secretariat (central administration), a monumental stone desert inside and out.

A sunny Sunday by the lake. Couples in love, families with children, young and old people stroll in groups along the beautifully leafy shore. The mood is peaceful and pleasantly quiet. Only on the pier, where swan-shaped pedal boats are rented, all hell breaks loose: taking off shoes, putting on life jackets, paying, getting on … all this does not go off without jostling and whooping. At sunset, the colorful plastic swans are especially coveted by the visitors of the park. They want to admire the view of the crescent-shaped promenade, the geometric contours of the Lake Sport Complex and the mountain range in the background in the soft light of dusk. If you’re now thinking of a postcard idyll in the Swiss Alps, you’re wrong. Lake Sukhna is located in Chandigarh, 250 kilometers north of Delhi, and the Shivalik Hills belong to the foothills of the Himalayas. Nevertheless, the thought connection to Switzerland is not entirely wrong, because the lake shore, Lake Sport Complex and actually the whole of Chandigarh were built according to the plans of Charles-Édouard Jeanneret-Gris, better known as Le Corbusier. 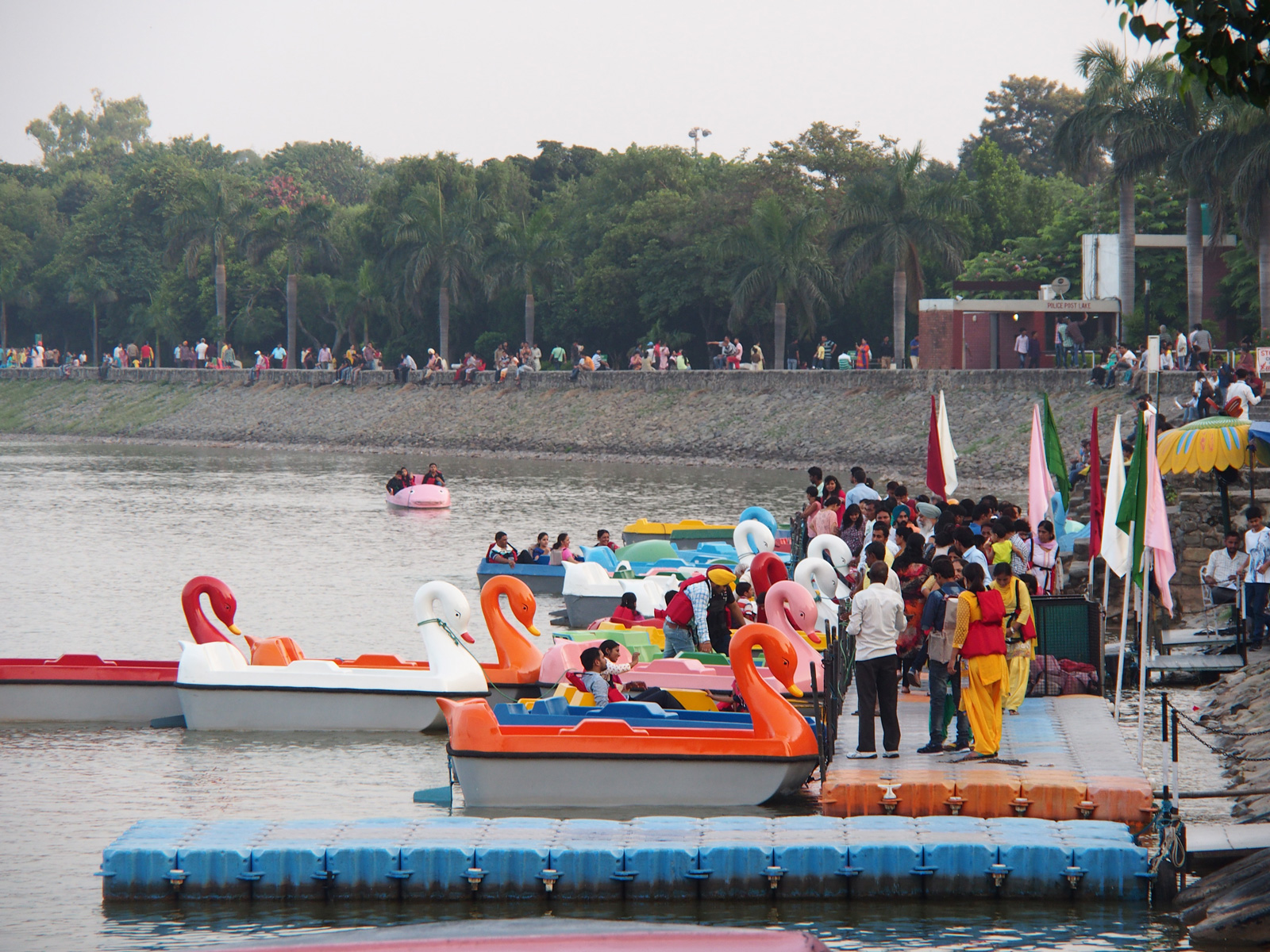 The historical background in brief: In August 1947, the end of British colonial rule sealed the division of the Indian subcontinent into two states, India and Pakistan. The border runs right through the state of Punjab, whose former capital Lahore is now in Pakistan. The Indian part of Punjab needed a new administrative seat and India’s then Prime Minister Jawaharlal Nehru decided to seize the opportunity: The new city was to become a symbol of modernity and freedom, uninfluenced by traditions and colonial subjugation. 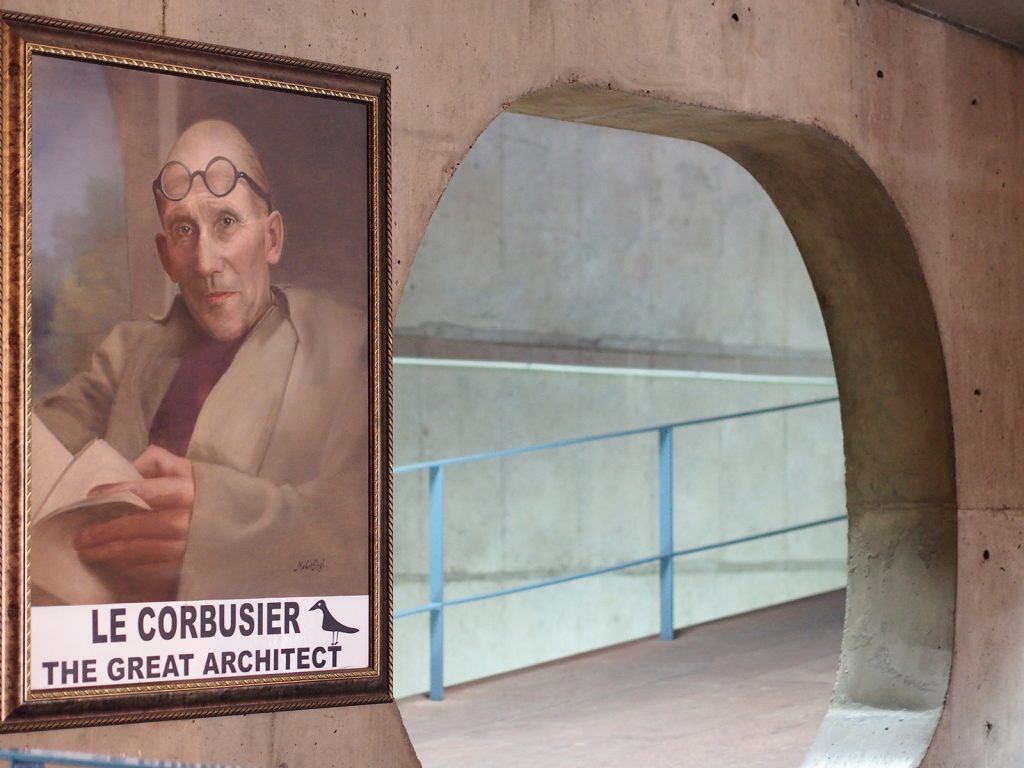 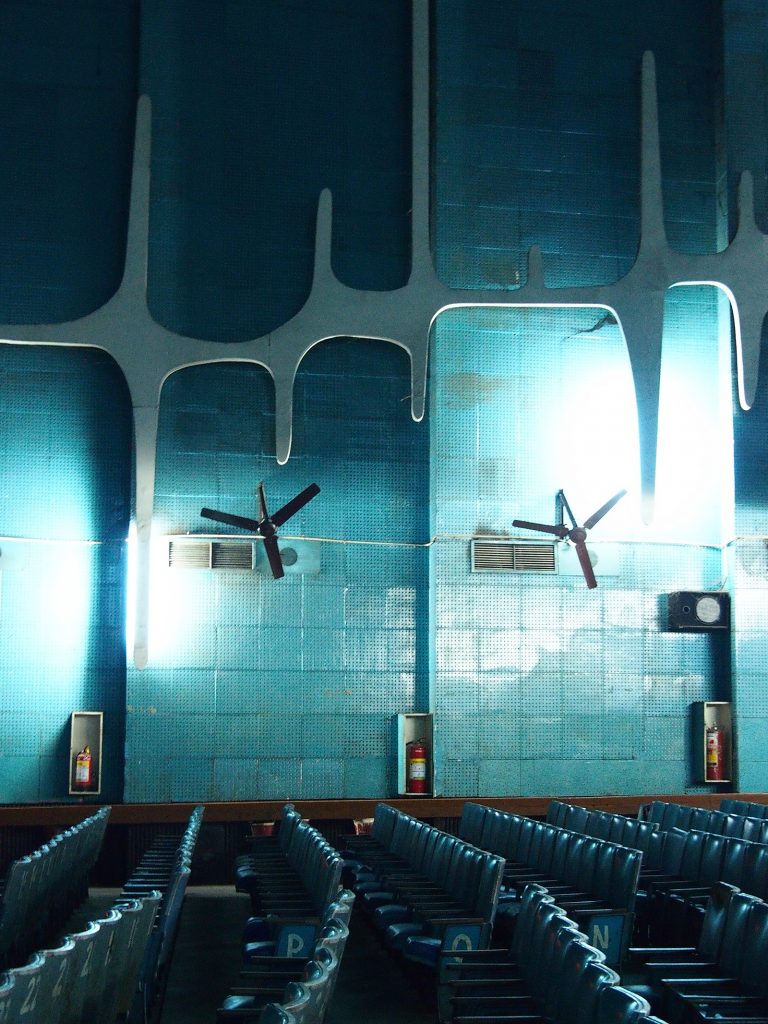 Top: Le Corbusier painting in the Parliament (Palace of Assembly). Below: Neelam Cinema in Sector 17.

Le Corbusier was among the most famous architects of his time. “Corbu was a genius, he was way ahead of everyone else in every way,” says S.D. Sharma, an architect from the early days on the Chandigarh team, “his vision for Chandigarh is the grandest experiment in the history of architecture.” That may be true. Le Corbusier designed the master plan for a city of 500,000 people. He designed monumental administrative buildings as well as a city plan that essentially consisted of 46 sectors, seven types of streets, generous green spaces, gray concrete blocks, and 14 different residential building models. Anyone coming to Chandigarh today can easily lose his bearings. Which street? Which sector? Which block? Everything looks the same and, at first glance, not very Indian: traffic flows smoothly along multi-lane boulevards. There are bicycle lanes and sidewalks under evergreen mango trees. The grass of the traffic islands is freshly mowed, flowers bloom in the middle. Nowhere is to be seen a cow, a begging child, a garbage dump.

This city is not called “city beautiful” by chance. “The lake, the many green spaces, the good air, the cleanliness – Chandigarh is the best city in India,” enthuses a family man strolling through Sector 17 in the early evening. A question about the buildings surprises him: “The houses? The houses are okay,” he says, perplexed, and follows his children as they head for a colorfully lit ice cream stand on the soccer field-sized Neelam Plaza. The square and the four-story buildings around it are oversized and made of gray concrete, but life bustles between them. A barber has set up his workstation under a tree; each customer is lathered, shaved, massaged with rose oil and dismissed enveloped in a sweet-smelling cloud. A few trees away, the bluish glow of a gas stove flickers. A boy stirs a tin pot; around him, customers wait for a paper cup of chai. The sugared and cardamom-scented milk tea is boiled several times and is tolerable for Western stomachs too. 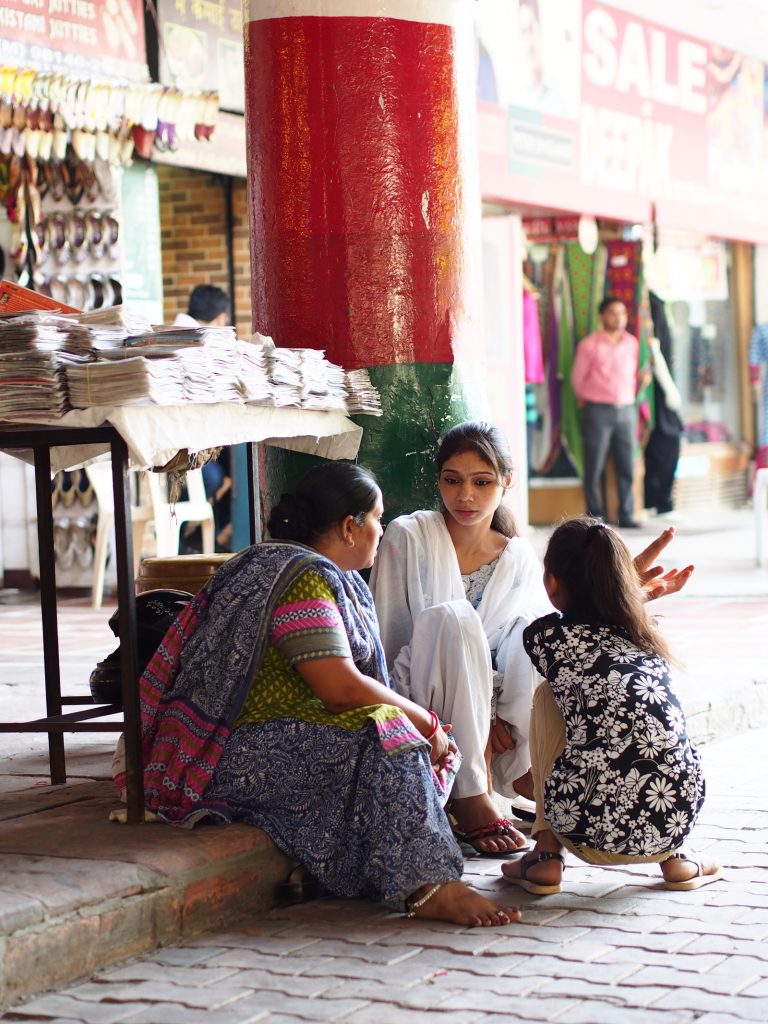 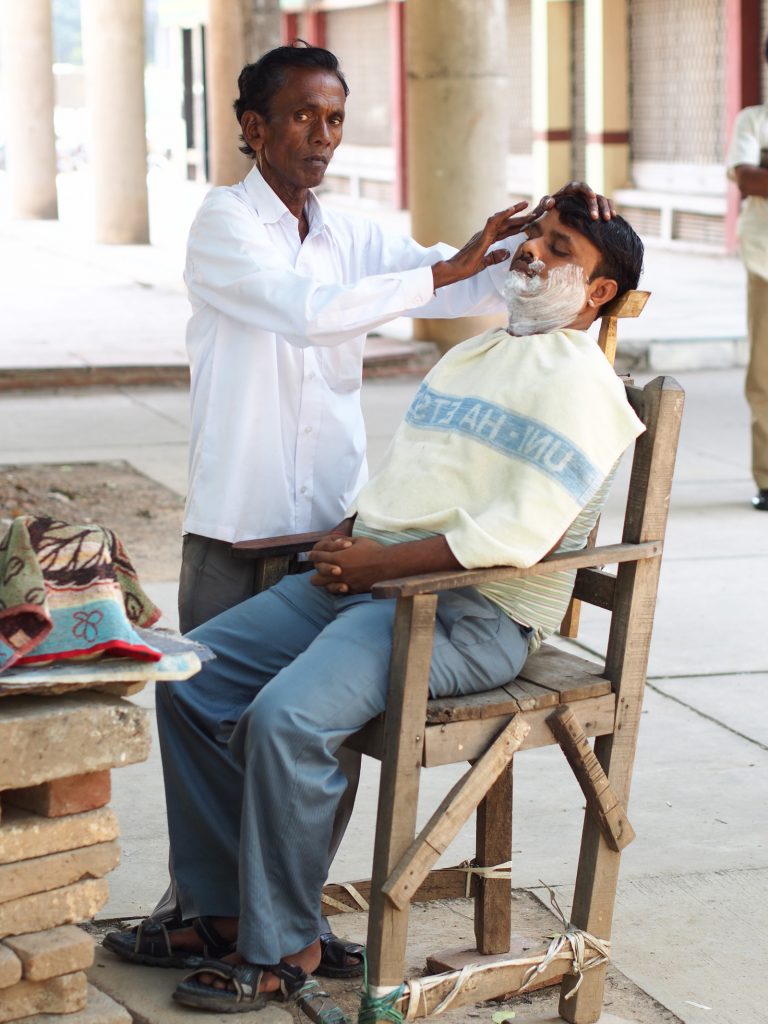 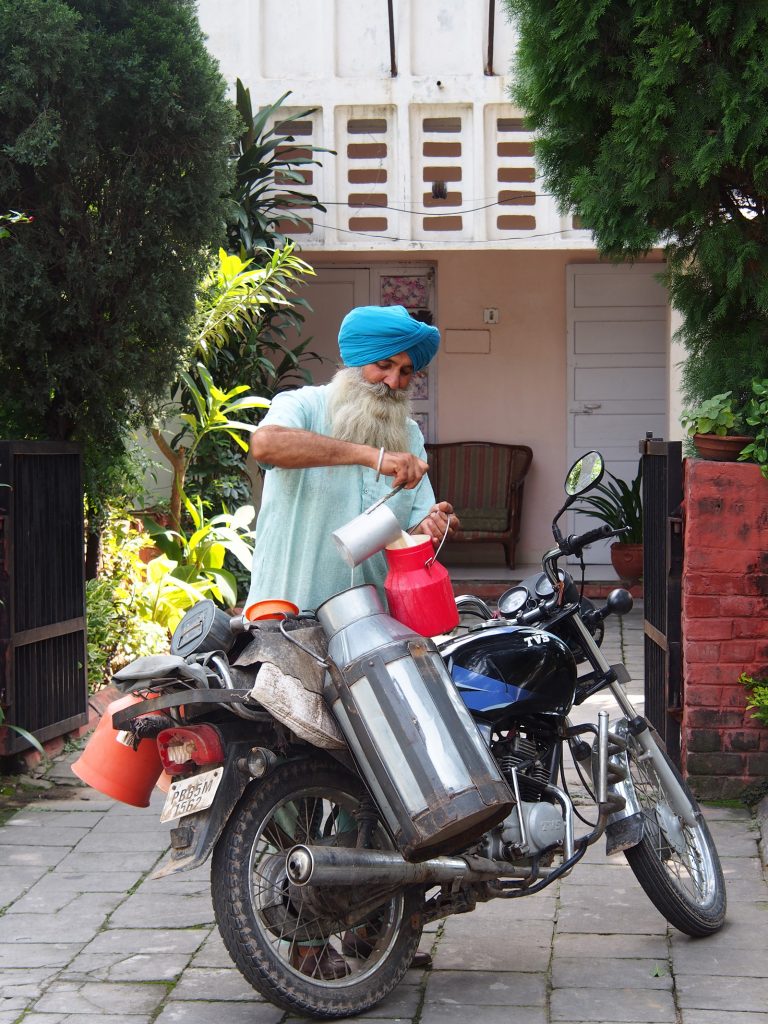 Everyday life in Chandigarh is as colorful, lively and varied as in any othe major Indian city.

Sector 17 is Chandigarh’s center with cinemas, stores and restaurants. Especially on weekends, half the city is out and about here. This didn’t happen by chance; Le Corbusier wanted it that way. “He divided Chandigarh up exactly,” explains chief architect Kapil Setia. The smart Indian sits at a meticulously tidy giant desk in an administrative concrete bunker in Sector 9. A 50-year-old city map hangs on the wall, clearly showing the grid pattern of streets and sectors. “Le Corbusier changed the lifestyle of Indians. His master plan is not at all in line with our habits,” says Setia, “We like to live close to each other in organically grown structures with public areas that we share. In Chandigarh, every square meter is neatly mapped out and assigned to specific activities. This formality bothered us at first. In the meantime, we have gotten used to it. Our children no longer play in front of the house, but in the playground, and the nearest market can often only be reached by car“.

Much of what had been neatly planned has since been quietly corrected. The roadside cook shop selling crispy deep-fried samosas filled with potatoes was not included in the master plan, nor were the bicycle rickshaws parked in front of the bus station, markets or movie theaters, or an ambulatory ironing service with a cordless iron heated by glowing charcoal. Behind thick walls, living arrangements were altered, such as adding an extra room in the backyard or adding a mezzanine in high ceilings. “What should I do?” asks Kapil Setia, “Chandigarh’s population has grown to 1.2 million people. I don’t want them to sleep on the streets“. 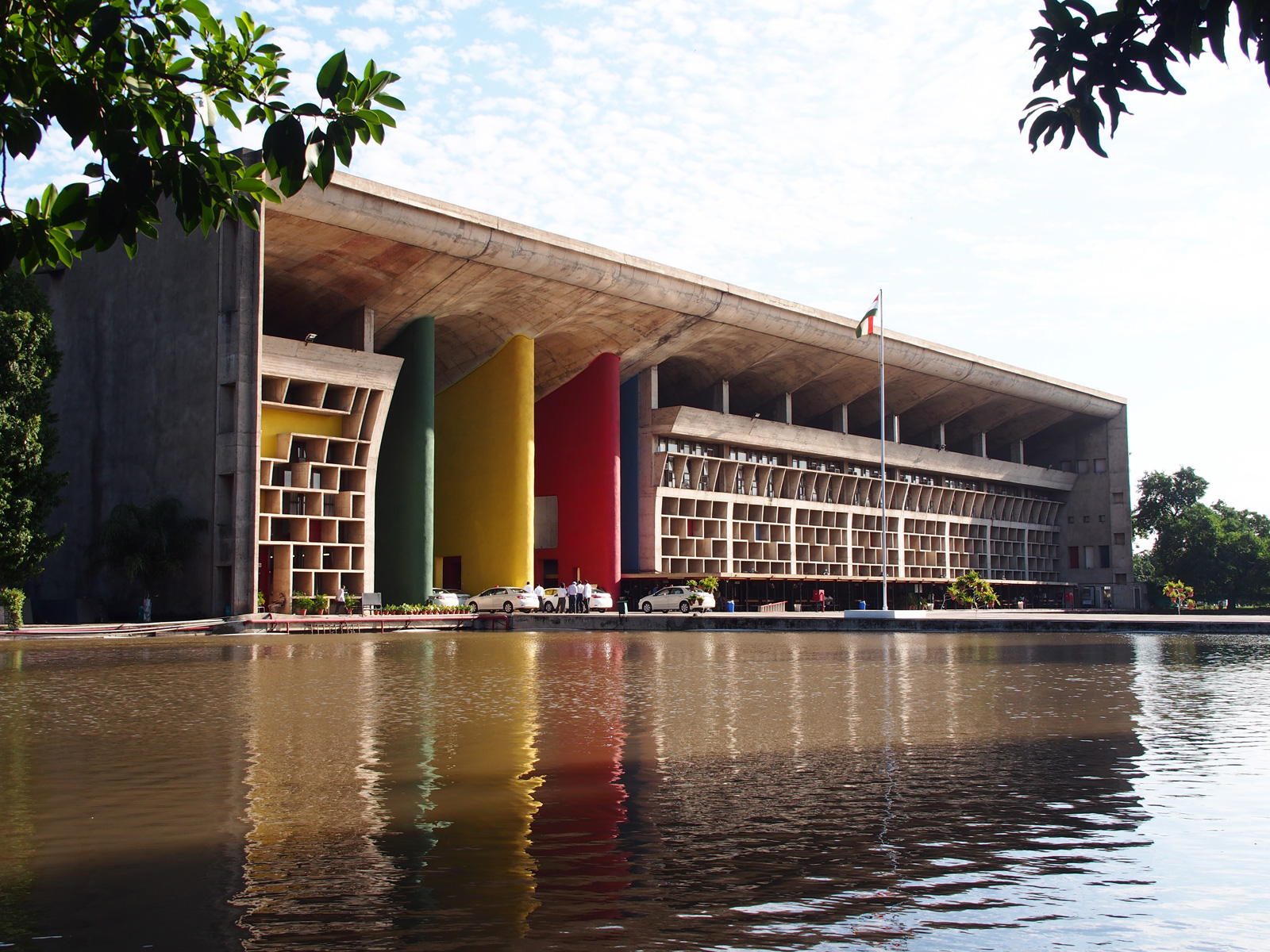 Imposing and colorful: the Capitol Complex, seat of Parliament.

The Capitol complex in Sector 1 is considered the city’s architectural highlight. The monumental buildings of the government quarter, consisting of the Supreme Court (High Court), the central administration (Secretariat) and the parliament (Assembly), were listed as a UNESCO World Heritage Site last summer. Nowhere is Le Corbusier’s penchant for megalomania more evident; the Secretariat alone is 254 meters long and 42 meters high, 10 to 15,000 people work there, and from a distance the building looks like an ocean liner plowing through the green of the treetops. 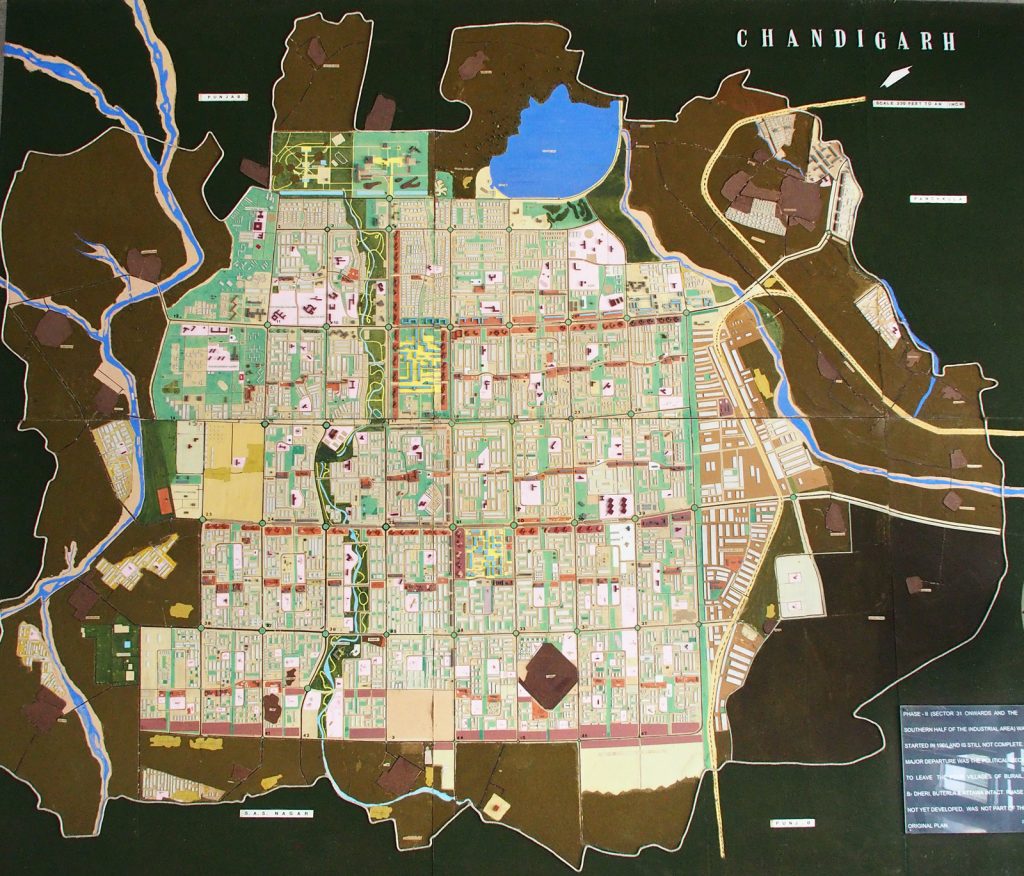 Recently, there has been a tourist information center in the military-secured government quarter, from where guided walks are also organized. The guides are often students of the renowned Chandigarh College of Architecture. Aastha and Navya, both in their fifth and final year of study, are part of the team that makes itself available for free for this purpose. “I was struck by how little Chandigarh residents know about Le Corbusier,” says Navya, who is from Delhi, “People have no idea how valuable their city is.” Aashta can explain: “Until recently, not a word was said about Le Corbusier in schools. Only since 2015, when the 50th anniversary of his death brought some attention, have there been any lessons at all about his architecture.” She is from Chandigarh, both her parents are architects, and she always knew what she would do when she grew up: build. Where? Doesn’t matter, but not in Chandigarh, and not in the Le Corbusier style: “Too much concrete,” she says.

Too much concrete. This is also the opinion of Surinder Sawhney, another graduate of Chandigarh College of Architecture. Sawhney grew up in Chandigarh, and his father was chief of police of Punjab – a post that entitled the family to live in one of the modernist villas envisioned in Le Corbusier’s master plan for senior officials, most of which were designed by his cousin Pierre Jeanneret. Jeanneret lived in Chandigarh for 14 years. Together with his team, he created all the everyday buildings needed in a city, including the residences and furniture for them. The Sawhneys first resided in the house that Pierre Jeannert himself had occupied: a two-story building with salons, kitchen, office, and staff quarters on the first floor and three bedrooms on the second floor – one of which Le Corbusier used during his regular visits. The white bungalow stands in a large garden and was completely neglected. “Incomprehensible,” says Surinder Sawhney. He leaves no doubt about his admiration for Le Corbusier and his team. “No city is perfect, but Chandigarh works,” he says, reeling off the benefits: Chandigarh has the cleanest air and most green space of any major Indian city, the highest average income in the country, the lowest infant mortality rate, virtually no unemployment, excellent hospitals and colleges. In Chandigarh, neither electricity nor water fail, the city is considered the richest in the country and, according to the “Cross National Happiness Index”, also the happiest. 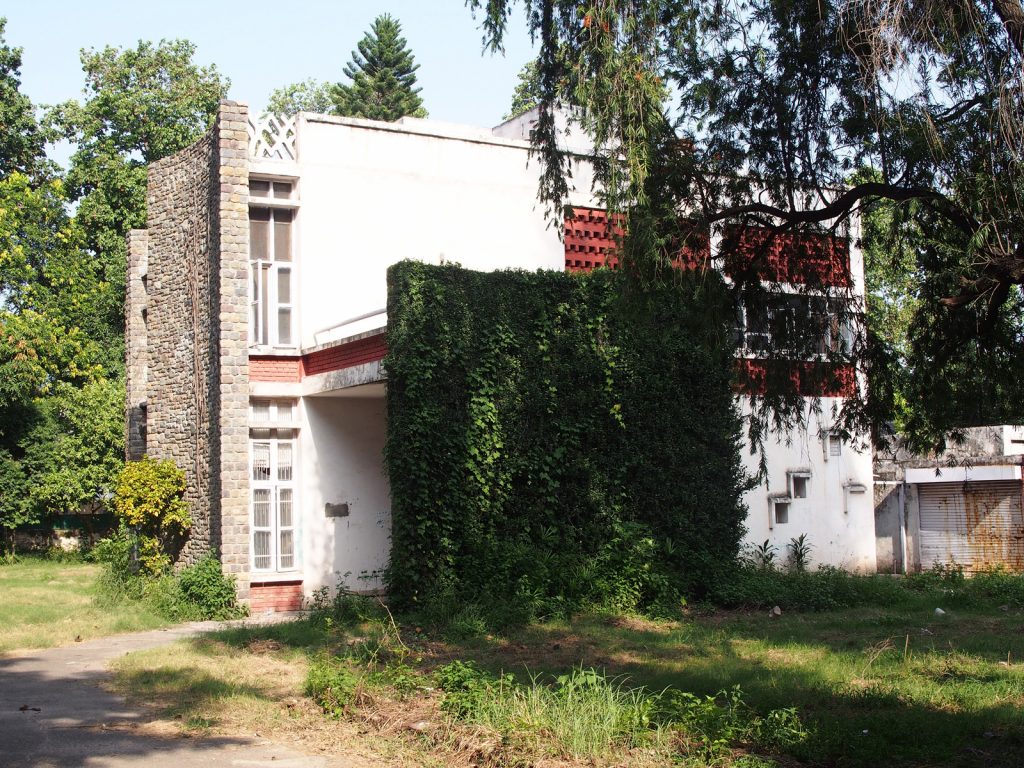 But yes, too much concrete. “Concrete is not suitable for our climate, it bursts when it gets too hot, on many facades you can see the marks left by age and rainwater,” explains Surinder Sawhney. Too much concrete, however, is not the only complaint he makes. Like Kapil Setia, he finds fault with the buildings: they are unsuitable for the Indian lifestyle. Too big, too straight, too hostile to communication: “There are old people who are lonely in their dwellings. In the posh northern sectors, sometimes one person lives in 400 square meters, which is a waste of space and nonsense.” His theory is that you can’t freeze Chandigarh’s structures. A city lives and changes.

Good architecture can tolerate that, and standing still would not be in Le Corbusier’s spirit. That’s how many people in Chandigarh see it. People get along without making a fuss about it. Journalist Vipin Pubby sits with colleagues in the nostalgic Indian Coffee House in front of a platter of spicy masala dosa pancakes. “We’ve divided one of these giant apartments into workspaces,” he says, “a tailor works in one, an ophthalmologist has her practice in two others, and I use one room as an office.” It won’t be long before the first cook shop is on the doorstep selling lunch. Only the cow will have to wait. 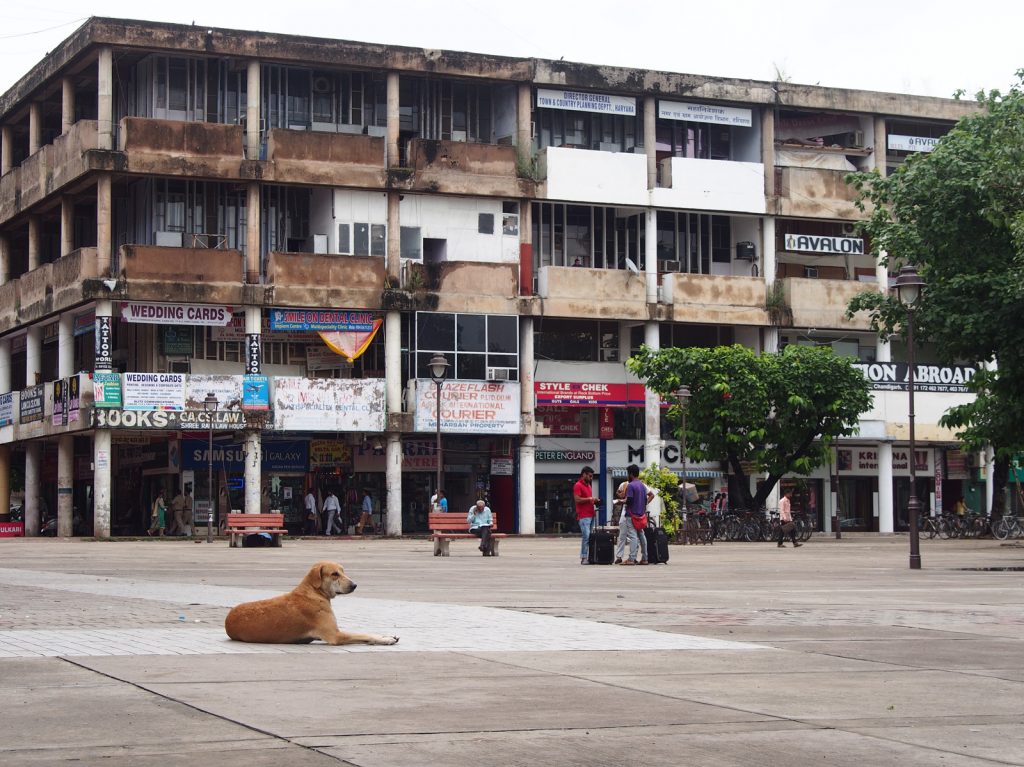 Sector 17: this is where most public life takes place in cinemas, stores and restaurants..

Indian-born Parikshat Laxminarayan and Alexander Metzler from Germany founded Enchanting Travels in the autumn of 2004. India was and still is one of the company’s passions. With offices in Bangalore and Delhi, the Enchanting team has access to a sensational network of local experts. Enchanting Travels focuses on high-quality individual tourism and offers tailor-made, long-haul trips to about 70 countries in Africa, Asia, Latin America, Australia, Oceania and Antarctica. enchantingtravels.com

Atmospheric, more than 50-year-old café in the middle of lively Sector 17. The guests sit at simple wooden tables, but elegant waiters serve them. The coffee is excellent, and the kitchen offers omelets, burgers and cheese toasts, as well as Indian specialties. SCO 12, Sector 17-E, Tel. +91 172 270 28 04

Chic restaurant with a huge selection of dishes. It is known for its good fish cuisine: you should try the fried pomfret and fish patrani, a fish steamed with coriander, mint and chili in a banana leaf. SCO 7, Madhya Marg, Sector 26, Tel. +91 172 304 56 78

Actually “members only” but as a western foreigner you can get in without any problems. The tables are right on the lakeshore, and you can enjoy a cold Kingfisher beer with your curry chicken. Sector 1, Tel. +91 172 274 06 24

If you are looking for books and illustrated books about the city, a travel guide or just a good read, you will find it here. There are also comics, cookbooks and beautiful agendas. SCO 2, Sector 17-E, Tel. +91 172 270 22 60

Nek Chand has fashioned a labyrinthine fantasy world from discarded building materials, found river rocks and other items. His extensive work was discovered in 1970, and today the rock garden is the city’s most popular tourist attraction. Sector 1, Tel. +91 172 740 645, nekchand.com

In the building where once the team of architects around Le Corbusier had their offices, a nice and very informative museum with many photos, documents and drawings has been created. Madhya Marg, Sector 19-B, Tel. +91 172 277 70 77